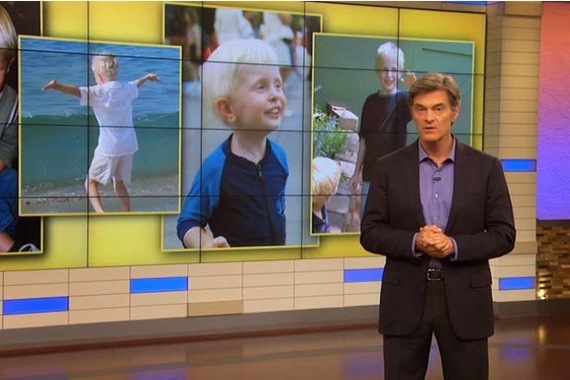 In 2012, in a gut wrenching intersection of a personal tragedy with a very public one in Newtown, Connecticut, I shared a painful story about my own family on my anonymous blog. Then, after a lengthy conversation with a close personal friend, I decided to allow him to republish it, with my name attached. My revelation that my son had mental illness and we didn't know how to help him has become Exhibit A in more than one essay about parental oversharing. For example, in 2013, Phoebe Maltz Bovy described my essay, "I Am Adam Lanza's Mother," as "the most outlandish version of a popular genre: parental overshare. And in an essay about "oversharenting" and privacy, the Washington Post's Abby Phillips placed my family's story right next to one about a mom who actually poisoned her son.

In the aftermath of my viral blog post, I thought long and hard about my children's privacy, and I made some pretty significant changes to the way I post things about my children on social media. I don't ever use their names now, not even in Facebook posts limited to friends. I think carefully about the content of any message concerning them, and I use privacy settings to limit access to people who can see what I post. Although I love Instagram, I try to make sure my children's faces are not visible in the pictures I share there.

But I absolutely refuse to stop talking about my family's struggles with mental illness. In the case of mental illness, or any illness, advocacy trumps privacy.

Every parent writer struggles with how to talk about his or her children. Emily Bazelon presciently took on this topic in 2008. Wondering whether her own revelations about her children's lives were violating their privacy, she asked, "Should we all close our laptops once our kids learn to talk?"

In response to her question, one honest blogger told her that he "mostly saw my hand-wringing over the ethics of writing about my kids as the result of 'the same narcissistic impulse that causes us to write about our families in the first place. Because most people don't care what we write.'"

This is a fact. If you write about your kids, or post their adorable pictures on social media, most people won't read what you write. And your intended audience -- real-life friends and family -- are likely to appreciate your posts and feel more connected to you. I don't see how that's any more harmful to your children and their privacy than an annual holiday letter, and those have been around for a while.

But I also understand the privacy advocates who worry about what happens if people do in fact read what you write. Quite a few people read what I wrote about my son on December 14, 2012. More than four million, in fact.

My chief complaint with people who use me as an example of oversharing is quite simple: they all contend that what I wrote about my son was damaging to him or his future.

In our case, sharing our story had more positive than negative outcomes. Because I spoke up, my son got effective treatment and is now back in a mainstream school with friends who are totally fine with his bipolar disorder. In fact, they -- and I -- admire his self-advocacy and think he is brave for speaking out and sharing his story. We were also able to connect to an amazing community of mental health advocates. No one has ever approached us in the grocery store and said, "I know who you are. You're that mom and kid who talked about mental illness after Newtown. You are horrible people."

Google "oversharing child cancer" and see if you can find criticism of mothers who post about their children who have cancer on social media. (I couldn't). Why was my alleged oversharing potentially damaging to my son's future? Because we should be ashamed of his illness? Or because the writers who criticize me are ignorant about mental illness?

Would you like to know what is actually damaging to my son and his future?

1. The appalling lack of access to mental health care for children and families.

2. Our society's decision to send children and adults with mental illness to prison.

These struggles -- cancer and mental illness -- are only different because the second mom will have tremendous difficulty both in getting people to care and in getting access to care.

Even Hanna Rosin, one of my most vocal critics after my blog post went viral, finally got this last point after she researched and wrote a moving piece on Kelli Stapleton, who will spend ten years in prison after a failed attempt to kill herself and her then 12-year-old daughter, who has autism.

Now, in 2015, I share the relevant portions of my family's story of our struggle with mental illness, with my children's permission, in every place I can. Mental illness needs as many poster children as we can get.

And this is my heartfelt request to parents of children with mental illness: keep speaking up for our kids. Your child has an illness that can benefit greatly from greater awareness and advocacy. You never know when sharing your experiences might change someone's heart and help to heal a mind.