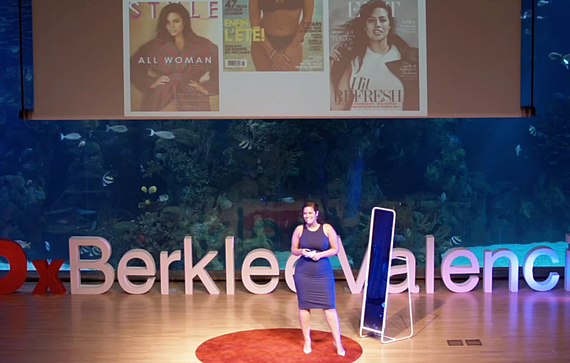 "You are bold, you are brilliant, and you are beautiful."

Ashley Graham was 12 years old when she was scouted in a mall. At 13, she had signed with a major modeling agency and was traveling the world shooting big campaigns. She then moved to NYC at age 17 to start her career as a full-time plus-sized model.

"Back in Nebraska, I was known as the fat model, the girl who was pretty for a big girl," she said during a recent TED Talk. While she hated telling people she was a plus-sized model, she soon came to the realization that "there's no one perfect body."

In fact, "plus size" is considered sizes 8-16 in the US. That's a large percentage of people if you look around--it might even include you. Ashley and other models are becoming more vocal about the isolating nature of the term "plus size."

"We are calling ourselves what we want to be called," she said. "Women with shapes that are our own." She also said that she likes to think of "plus size" as "my size."

Ashley went on to say how modeling when she was younger actually hurt her confidence. "I was looking for self love, for affirmation from somebody when in reality I didn't love who I was, and I couldn't seem to get a handle on regulating my own weight," she said.

Finally, she learned that you have to become your own role model. Ashley credits her mom for teaching her that true beauty and self-worth come from within. "In my lowest moments of insecurity, this is when I realized that I had to reclaim my body and its image as my own."

So, how'd she do it? She faced the facts and accepted all of her flaws. "I was never going to be perfect enough for an industry that defines perfection from the outside in," she said. "And that's okay. Rolls, curves, cellulite, all of it... I love every part of me."

After Ashley showed off all of her magazine covers that the people in the fashion industry told her she'd never get, she left the audience with these inspiring words: "Be you. Be real. Be authentic. Be your favorite kind of woman. And remember, this is the generation of body diversity."

More from Teen Vogue:
10 Quick Ways to Pump Up Your Ponytail

4 Things You Need to Know Before Getting a Facial