Last week, I found myself at the center of a milk storm of media madness, after the article I wrote about the mom who breastfeeds her friend's son went well and truly viral.

And through the storm, there came a recurring statement that was fired out without reserve:

"I support breastfeeding... but only behind closed doors. Nobody needs to see it."

But it really raises the question: what do these people suggest we do when our babies are hungry at the grocery store... or on the subway... or at church?

Are these bathroom stall doors, for instance, the doors that these naysayers are seriously suggesting hiding behind? 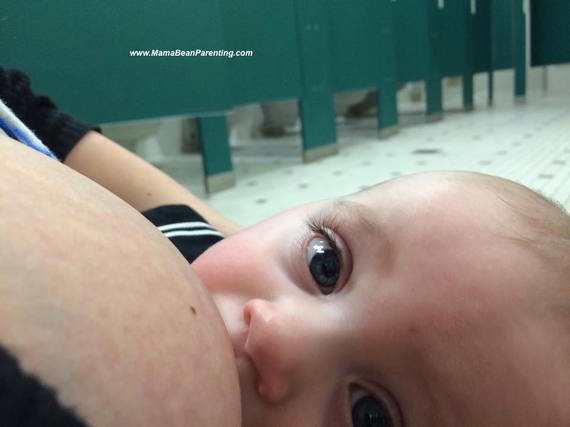 This is one mom's view as she feeds her 7-month-old son, while sat on the bathroom floor of her local church.

Yes, on the bathroom floor. Would you eat your lunch in here?

Kimberlie -- the mom behind the picture -- told me:

"Prior to feeding, I had a few women tell me how I should keep breastfeeding and that it's the best thing for me and the baby. One of the same women then said it'd be "appreciated" if I moved to the handicap stall. I couldn't believe they were serious. It's like they're saying that you're a bad mother if you don't breastfeed, but you have to do it in the closet -- because it's something to be ashamed of."

I wish I could tell you that Kimberlie's experience is isolated and rare. But I cannot...

A couple of weeks ago, I came across this year's Lansinoh Global Breastfeeding Survey -- a survey that canvassed the opinions of over 13,000 moms across the world, covering many aspects of breastfeeding -- from the significance of maternity leave to the influence of celebrity breastfeeders.

Within this data, there was one statistic that I just could not overlook... one that jumped right out from my computer screen... much as Kimberlie's picture had done a day or so earlier:

1 in 4 nursing moms in the U.S. have been openly criticized or have experienced prejudice while breastfeeding in public.

There is no way of saying it that makes it any easier to hear. It's 2015 and we have a 1 in 4 chance of being ridiculed, shamed or harassed for feeding human babies human milk... isn't it time that changed?

Let me say this clearly, just in case the naysayers are listening: breastfeeding is not a shameful act and yes, we really do need to see it. We need to share our pictures and our stories; we need to continue to open this dialogue about breastfeeding. And luckily, companies such as Lansinoh are doing exactly that; asking the questions and raising awareness about a topic that is literally being shut away behind closed doors.

"Usually there's a chair in there because another mom breastfeeds too. That poor woman has been repeatedly made to breastfeed in a bathroom stall at a church... I sat on the floor to feed my son because I refused to sit on the toilet or go in the stall -- not happening. Neither of us deserves the bathroom."

My heart aches with the knowledge that there are moms feeling that they have no other option than to nurse in a public bathroom. My heart aches because I too, once felt that pressure. Just like 1 in 4 of us will do at some point... or -- terrifyingly -- 1 in 4 of our daughters.

Isn't it time, for all our sakes, to normalize the normal and normalize breastfeeding?

If you support breastfeeding, join Mama Bean on Facebook and help #NormalizeBreastfeeding.