Matthew Bishop, the U.S. business editor of The Economist, has described himself as a "card-carrying capitalist," so it's a little surprising to pick up his new book, The Road from Ruin (co-authored by Michael Green), turn to the cover flap and read the opening salvo (served up in bright blue lettering): "We Have a World Class Mess... Now What?"

Having a business editor of The Economist start things off with such a frank admission of "the fundamental flaws in the way we do capitalism" is one of the main reasons I've picked The Road From Ruin as this month's HuffPost Book Club selection.

A forthright examination of what went wrong with our financial system and how we can fix it by moving, as Bishop and Green write, "beyond preconceived ideas and orthodoxies" is exactly the conversation we need to be having as a country right now. But you can only have a productive conversation about this with those who acknowledge that capitalism as it's now practiced is not working.

There isn't much chance of finding a new way forward if the person you are talking to is convinced that, despite all evidence to the contrary -- what Bishop and Green call "the ruins of the discredited old capitalism" -- the status quo is a-okay, and all we need to do is let the market right itself.

We saw how fruitless that was with the health care debate. People who still believe we have the best health care system in world will never be convinced otherwise -- the same goes for those who cling to the fantasy that the economic meltdown is just a bump on the road to endless prosperity.

Bishop and Green are true believers in the capitalistic system -- but have not let that faith blind them to the "toxic ideas" that led us, and much of the world, to the brink of economic collapse. "If the biggest mistake we could make after the crisis would be to abandon capitalism," they write, "the second-biggest mistake would be to assume that capitalism does not need to change." 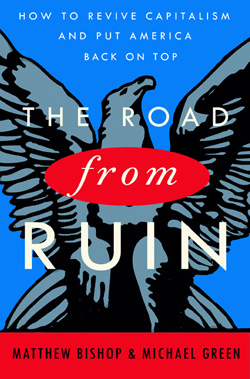 One of the most fascinating things about reading The Road From Ruin -- and a fascinating read it is -- is observing the internal argument the authors are having with themselves. On the one hand, they realize that doing nothing, living in denial, and hoping that an unregulated free market will right itself is a path to oblivion and economic depression: "This is no time to simply reboot the system or attempt to restore the status quo ante. Serious problems have been revealed by the crisis that need to be put right."

Yet they remain notably leery of government regulation, fearing it will quash innovation and the optimism that they see as being at the heart of capitalism, a system "that taps into the deep human desire to strive for a better life." That's why their historic look at the boom and bust cycles since the Tulip craze of the early 17th century makes the case that economic bubbles are needed engines of economic prosperity and that "crashes are part of the learning process."

While I completely share the authors' appreciation for the optimistic nature of capitalism, we disagree on the need for muscular oversight and regulation. They, for example, reject the restoration of the Glass-Steagall split between commercial and investment banking -- which I consider essential. But this is a book worth reading even when you disagree with some of the authors' solutions.

Bishop and Green divide the book into two parts. The first charts the road to ruin -- with the authors acting as economic archaeologists, digging through the rubble created by historic crises including the French Panic of 1720, the Great Depression, Japan's lost decade, and the bursting of the dotcom bubble -- in search of lessons that will allow us to create a better version of capitalism.

The second half of the book lays out the path we must take to get there. It includes four "big ideas": the need to "rethink economics" ("we have to stop driving blind," say Bishop and Green, by relying on misguided data); the need to "redesign global governance" ("Ending the dollar standard is crucial for creating a stabler global financial system"); and the need to "put values back into business; and promote financial literacy."

I find these last two big ideas particularly compelling. The section on values is right in Bishop and Green's wheelhouse -- their previous collaboration was on another favorite book of mine, Philanthrocapitalism. "While the primary responsibility of business is to create value for its shareholders," they write, "business does not exist in a vacuum. Business cannot shuffle off responsibility for the environment or for the wider good of society as a whole onto government."

This idea that businessmen have responsibilities beyond the bottom line is central to effective capitalism. Alfred Marshall, one of the founding fathers of modern capitalism, called it "economic chivalry," writing in his Principles of Economics that "the desire of men for approval of their own conscience and for the esteem of others is an economic force of the first order of importance." And there is a reason Adam Smith's free-market gospel, The Wealth of Nations, was preceded by his Theory of Moral Sentiments. He knew that economic freedom could not flourish without a firm moral foundation.

But that moral foundation is by no means inevitable. We've seen the results of capitalism without a conscience: the pollution of our environment, the endangerment of workers, the sale of dangerous products, and the wholesale loss of millions of jobs and trillions in savings. So Bishop and Green's call for capitalism "to rediscover its soul" cannot be sounded too often.

The same goes for the case they make about the need for all of us to raise our financial IQ: "We teach civics in our schools to prepare children for the responsibility of being citizens. Yet we have done little to make people competent economic citizens." This applies to both our personal finances (where we have allowed our debt to skyrocket and our savings to dwindle) and to the financial questions we are debating as a country. It will be hard to know if the Masters of the Financial Universe have actually changed their ways -- or if the new financial rules Washington eventually puts into place have any real teeth -- if we don't all become better informed about the economic choices and challenges facing us.

This is particularly important given the footdragging we are seeing on Wall Street and in DC. As Bishop puts it: "Our politicians and business leaders seem to think they can ignore this wake up call, so it is going to be up to the rest of us to demand real, far-reaching change."

But before we can do that, we have to understand how we got into this "world-class mess" and begin having an open-minded conversation about how to best get us out. Reading The Road From Ruin -- and joining in our month-long discussion about it -- is a great way to start.