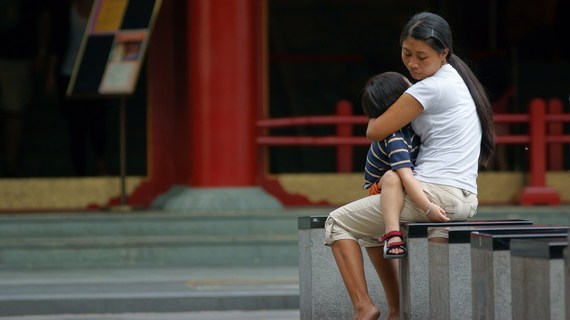 Not for me...not for my family.

For someone else's family.

Someone who doesn't have the luxury like I do, of having her little girl under the same roof.

Not in her arms nor at arm's length, arguing over what she wants for breakfast or which channel she doesn't want to watch on the TV...she's not even 'just around the corner' at a play date or at school for the day.

I say luxury, but for the majority of us born in the western world, luxury is not a word we would normally associate with having a child, our own child, living with us in our own home.

Caring for them as only a parent knows how, making sure there's enough oil to keep the wheels spinning on the family home, day in, day out. It's largely something we take for granted and all too often catch ourselves complaining about, fervently.

For some people, like my friend who's also a Domestic Helper, Lara*, it's simply not an option to have her little girl living with her, permanently.

You see, Lara hails from the Philippines and in her quest to guarantee that her four year old has a future where she can be educated, clothed and fed with adequate healthcare, she chooses to make a separate life in Hong Kong, without her daughter, indefinitely.

As a Domestic Helper, Lara knows that being a cleaner, cook and nanny for someone else's family means earning far more than she could ever possibly earn back home using her degree in Business Management.

The Philippines is an impoverished country with a population stretching towards the 100-million mark -- one third live below the poverty line. 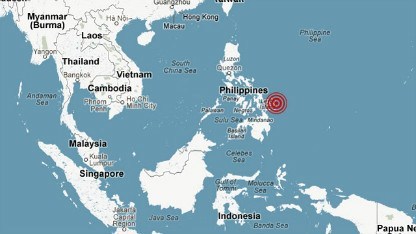 It's a country that tends to fly under the radar -- that is until tragedy strikes... and it does, often.

Situated smack bang on the Ring of Fire, the archipelago of 7000 islands is frequently caught in the firing line of typhoons and earthquakes. Only then does it become newsworthy. Headlines of destruction and despair alert the world to the plight of this nation -- a nation that seems stuck in a time warp, unable to move forward from the grip of corruption that has plagued it for decades.

But this is also a resilient country with equally resilient people, renowned for picking themselves up again and again... and that alone gives you faith in the Philippines' future. 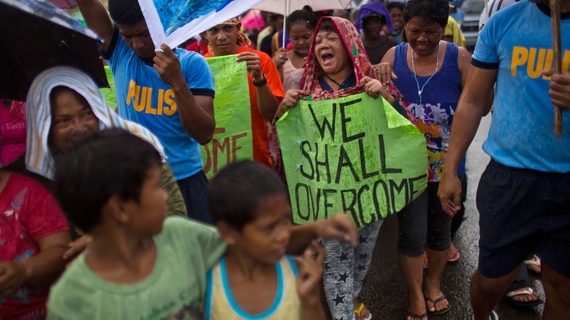 It's this resoluteness that has seen the nation's women become the backbone of the economy. Since the early seventies the female proportion of the population has had its path mapped out -- mostly off shore.

It was 1974 when the then President of the Philippines implemented the first labour exporting policy in the form of Overseas Filipino Workers (OFW's).

A way to combat rising unemployment, OFW's brought an added bonus in financing the government's coffers with overseas workers' remittances (which today are worth a staggering US$20 billion).

The OFW trend coincided with the economic rise of nearby countries like Hong Kong and Singapore.

A labour shortage in Hong Kong meant the female labour force was mobilized and families with two incomes sought help to manage their household, in turn creating considerable demand for domestic helpers.

Today, not much has changed. There's still a labour shortage and Hong Kong has become a 'Maid Economy' relying heavily on the mass exodus of women from the Philippines and Indonesia to fill these positions, freeing up professionals to work long hours and pump up the country's gross domestic product. 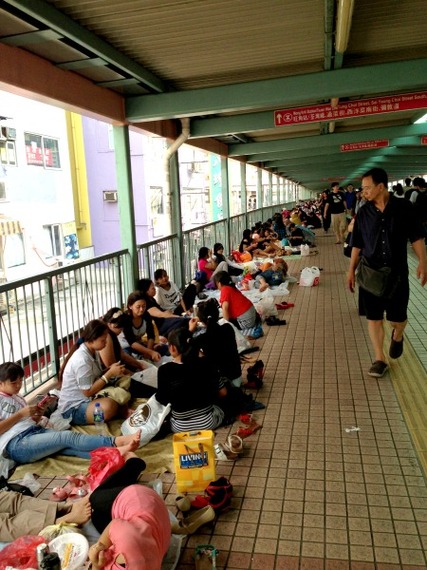 Still it's not enough to plug the acute shortage -- last year the first group of maids from Bangladesh arrived in the city. Agencies hoping the country will provide a rich source of women willing to work in a foreign country for US$505 a month. To apply for a Domestic Helper position in Hong Kong, these women pay three times that monthly salary and spend three months in training, learning, among other things, to speak basic Cantonese and cook Chinese food.

Ten million Filipinos are currently working overseas with nearly a million leaving each year to work with employment programs.

Most of them are women, propping up the economy, by sending 80-90 per cent of their salary home each month to care for less able family members and children - in the hope of providing them with a better life ahead, a chance to break out of the mould.

Many of them are skilled workers like Lara, taking on unskilled work -- meaning countries like the Philippines are becoming victim to what's touted as 'brain drain.'

But trained workers are not all they're losing.

Children in the Philippines are being called the 'motherless generation.'

A UNICEF-commissioned study estimates that roughly one in four children in the Philippines have at least one parent working abroad.

More and more, that means a mother living halfway around the world for 10 or 15 years at a time.

The government (rightly so) applauds OFWs as heroes for the sacrifices they make for their families.

But while children whose mothers are nurses in Canada or housekeepers in Hong Kong often go to good schools and have the latest gadgets, there's a growing sentiment that trading global dollars for a generation 'raised on Skype' is a raw deal.

The Philippines has a young population with over 35 per cent of the nation 14 years old or younger and that's on track to double between 2000 and 2030, sending tens of millions more into a limited workforce.

While the Philippines economy is growing and confidence is at an all time high, these kids see few opportunities at home. The notion that being able to feed your family means leaving the Philippines is a message they are quick to accept.

So, after weeks of having her little girl by her side in Hong Kong, yesterday Lara said goodbye to four your old *Chloe.

Whenever we've seen Lara in these past weeks, Chloe comes too, tagging behind her mummy, happily slotting into her daily routine. She and my two year old have become inseparable...great mates -- playing, jumping, skipping, eating, sharing (or not) talking in their own code together, language no barrier to a great friendship.

Now she's left our shores, how do I explain to a two year old "why she can't stay with her mummy?" -- that Chloe has had to go back to her own home in another country and she won't see her for many months?

What do I say to Lara when I see her, alone, without Chloe running in behind her, squealing excitedly for my girl.

I know she'll laugh it off because that's just how it is... and she'll give my little one an extra big squeeze... but the sadness in her eyes will be there.

It's back to Skype after much love, laughter, joy and I'm sure a good dose of motherhood angst and despair thrown in for good measure -- just like any normal mother and daughter relationship, except it's not.

Today I'm hugging my girl just that little bit tighter, feeling lucky, because really as a wise friend pointed out to me - that's all it boils down to, LUCK, luck of the draw as to when and where we are born in this great wide world of ours.

Like every good parent, you do your very best with what you are given.

But that doesn't always make it fair. 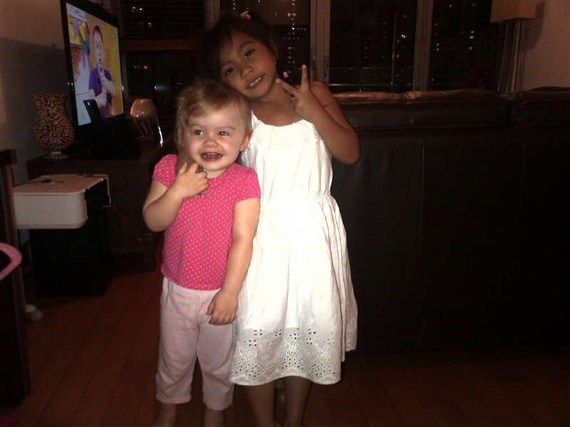 *Names have been changed

You can read more from Nicole at Mint Mocha Musings: The Hotelier's Wife, an Expat Affair in Asia