Christmas in the Berkshires is like waking up in a Currier & Ives sampler accompanied by that Leroy Anderson song. Since the completion of Thomas Schumacher and Matthew White's place in the country, a gorgeous pile atop a hill in Hillsdale they've christened Otium, a small group of us have turned up each Christmas Eve and Day, washing away our city stress with mulled wine and one another. The environment is pretty grand, but we're not. Just a circle of friends who like to laugh and argue, with families too far away to visit in the short break that Broadway's holiday performance schedule allows.

There's plenty of food, films, music. There's theater, too -- we're a kind of theatrical crowd -- and roles are assigned, speeches conned, costumes invented, marionettes untangled. These divertissements, largely for the benefit of the youngest of our merry band of players, Master Eli Deutsch, son of Kurt Deutsch and Sherie Renee Scott. Eli was conceived in the summer of 2003, while we were ensconced en masse in a converted schoolhouse somewhere in the north of Tuscany.

In those plummy pre-Otium days, our gang had a good summer-in-Italy thing going, always hosted by Tom and Matt, who by now must be in line for Italian Prime Ministers for all the good work they do in support of the Save Venice Foundation. They'd rent a villa or a palazzo or a schoolhouse or a farm, and we'd eat and swim and drive to amazing places to see heartbreakingly beautiful art, then drive home to eat some more and luxuriate in the pleasures of the day.

Since we were there when he first came into being, we all take special interest in Eli, now a super-bright blonde bulb of a boy. Eli takes special delight in watching the grown-ups acting silly. The sillier, the better -- that seems to be winningest strategy. One year, having won a treasure hunt, wearing a pirate hat and brandishing a rapier, Eli shouted, "I can't believe my life!" That could be the motto for every Christmas in the magic world of Otium.

So we were desolate when Tom and Matt informed us that there would be no Christmas at Otium in 2012, as they were off to Venice to save yet another part of the sinking city. I know saving Venice is important, but more important than Christmas in the Berkshires? Seriously? Consternation became disappointment, which became resignation.

And then the email arrived from Tom.

"Dear ones -- Since Christmas has been cancelled, let's do Thanksgiving instead. Saturday of Thanksgiving weekend, to be precise. You must come. Must, as in you're coming. 'No' is not an option. Fun and games and the whole gang. November 24th. Be there."

Okay, I thought, now we're talkin'! The group would convene after all! Meals would be eaten. Wine would be mulled. Songs would be song. Hilarity would ensue. Roger (Rees, my partner in crime) goes online to Hertz, and we snag their last available Chevy. Christmas is going to come early this year. Let's get cracking!

Early on November 24, buckled inside the aforementioned Chevy, Roger and I head upstate. The phrase "wending our way" was coined for drives like this -- over the river and through the woods, until at last Otium comes into view. Tom is at the door, waving. Holden, their beloved dachshund, is yip-yapping, beside himself at the thought of two more two-legged playmates.

"Drop your stuff, we're going into town," Tom says, meeting the car. "Matt wants us out of the house. Preparations for tonight." For the marionette show or the Commedia extravaganza, I assume. Holden and Roger share a quick lick, and off we go to the Hillsdale General Store, and crucially for my empty stomach, to Crossroads, the perfect eatery next door. There we meet others gang members: Rick Miramontez and Jamie DuMont, Cathy Grier and Michele Steckler, and Michele's sister, Katie. A lunch-fest commences.

By the gloaming, we pile into Tom's jeep and head back to the house. A half dozen wild turkeys, happily oblivious to their proximity to Thanksgiving, scatter as we head up the drive. Currier & friggin' Ives, I tell ya! Kurt, Sherie, Eli and the indescribably delicious Jorge Vargas are due to arrive within the hour.

I notice the doors to the sunroom are closed and blocked by chairs. I suspect this is because of Matt's "preparations" -- a stage, I bet, assembled by Matt while we were out of the house. Holden, the ecstatic herald, barks at the front door, and in come Kurt, Sherie, Eli and Jorge. The great room is now officially great. It's the gang again -- this motley crew -- happily catching up and laughing and marveling at how smart Eli is and how tall. An hour passes, or maybe a year. Time at Otium is what Blanche DuBois would have described as a little drop of eternity, and she'd have been quite right.

We decamp briefly to change for dinner. In our room, I ask Roger if either Tom or Matt have said anything about the show, laid out in the sunroom, behind the barricaded doors. Traditionally, Roger plays the Prologue; his accent lending a continental je ne sais quality to the proceedings. But no, Roger is as much in the dark as I am, and as suspicious. Freshly accoutered, we rejoin the others for drinks. Primi prosecco, dopo divertimento, as they say in Toscana. Or not. As if on cue, Tom asks us all into the sunroom. The chairs blocking the doors are removed. We wonder aloud what marvels await us on the other side.

Oddly, there is no marionette stage. No swagged drapery. No box of hats and masks. Nary a prop. Only ten chairs facing one end of this ne plus ultra of sunrooms. Tom and Matt stand before us. We're asked to sit. The moment is ripe with anticipation. Tom invites Sherie, seated, to begin.

And she starts to sing, incomparably as is her wont and gift -- and a cappella, which only sharpens the beauty of her voice -- and only then do I notice she's holding a small volume, bound in red leather. Then, her song ended, she rises and stands between Tom and Matt. She opens the leather-bound book and reads the first words of what clearly is...

That's crazy, I think. This almost sounds like... and then, in a moment, I realize, no, not like. Is. Around me, I register similar gasps of realization. This is a ceremony. My heart is pounding. I look at Roger. His eyes are shining. Michele and Cathy are tearing up, too. Jorge is cooing. Kurt is kvelling. Rick and Jamie are beaming with joy. We are suddenly witnesses to something that, after their 30 years together, seems quite inevitable, humble, intimate. Sherie is marrying Tom and Matt.

Tom and Matt exchange their vows and an embrace, then lead us in two choruses of "Zippity Doo-Dah." My oh my, what a wonderful day, indeed. A cavalcade of yellow rose petals flutters down on them. Maybe we toss them, maybe they fall from the heavens, who's to say? And that's it. Tom and Matt are officially, legally, wed. Wow.

Sherie signs a piece of paper, as ministers do. Jorge, Tom and Matt's oldest and dearest friend, signs too, as witness. The rest of us are too ferklempt to do much of anything except grab for our phones to snap away at the guys, at the minister, at the witness... at Eli, smiling ear to ear so proud to have kept the secret; at Holden, howling his approval. Tom and Matt are blushing like, well, grooms. Giggling at having pulled this off, these surprise nuptials. This dear duo, who'd never said a word about it, appear taken by surprise themselves -- at seeing how much it means to this ramshackle family of friends to share this most personal moment in their lives. An act of love and commitment simply, modestly, beautifully expressed.

We pelt them with questions and excitement -- and a couple of olives too, I think. And then, we sit down to dinner. I look around at our faces -- thirteen happy ones. There's a glow in the room, emanating from each of us, melding with the candlelight somewhere over the roast potatoes and Brussels sprouts, and making me feel very warm inside. Or maybe that's the wine. As Eli likes to say, I can't believe my life.

After dinner, Cathy sings a Beatles song, accompanying herself on the guitar. Perfection. Roger offers a Shakespeare sonnet. It's the one that starts "When in disgrace with fortune and men's eyes..." The last couplet goes like this:

For thy sweet love remembered, such wealth brings
That then I scorn to change my state with kings.

A recognition of commitment, simply, modestly, beautifully expressed. Just like the marriage we had come unwittingly to Hillsdale to witness. 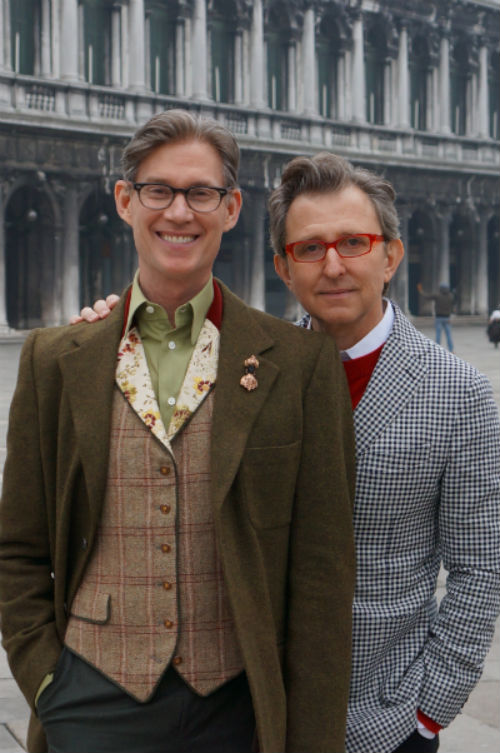 Rick Elice is a theater writer whose musicals and plays have been performed all over the world, with two, Jersey Boys and Peter and the Starcatcher, currently running on Broadway.