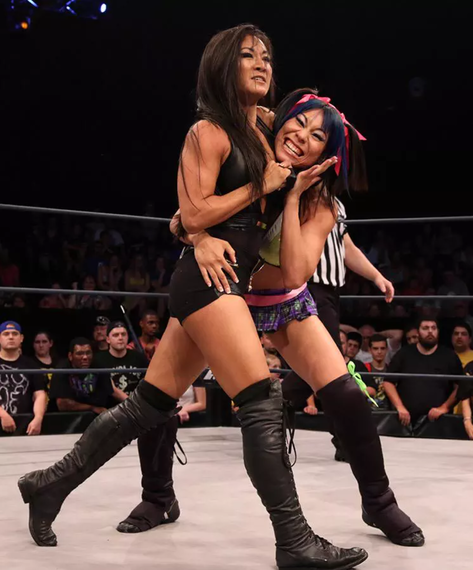 Gail Kim (left) and Jade (right) wrestle in a match for TNA Total Impact. Jade is a survivor of domestic violence.

For a professional wrestler, a headlock is a common maneuver inside the ring. But for TNA Total Impact’s Jade there was one headlock that felt particularly threatening. “When he finally let go, my then-boyfriend just left me there and I’m wondering what the hell just happened. Was he legitimately trying to hurt me? Because it was a headlock, and we’re both wrestlers, I justified it as maybe it was him trying to playfully end [the argument],” said Jade.

But this wasn’t the first time he put her in a headlock.

Jade had consensually wrestled her ex on numerous occasions. In fact, she prefers to wrestle both men and women. She wants women wrestlers to be seen as equals to their male counterparts. But it’s that pressure to break glass ceilings, and be seen as unbreakable, that contributed to her silence around her own abuse.

“Women athletes, CEOs, those in power, we feel this pressure to be a role model to other women, to be strong, that we don’t want to let them know our struggle. I didn’t want to be known as a 'victim.’ I was also trying to get on TV, so if I tell my story, would this mess up my career?”

And so she stayed quiet for a long time. But behind closed doors, Jade says the abuse was escalating. “It got more and more regular that if I said something he didn’t like he would get violent. One time I was in bed and we had a disagreement, so he left the room but came back in to head-butt me. Then he started to choke me. In fact, whenever he didn’t like something I said, he would choke me. Soon down the line, I realized that his mindset was because I’m not hitting you, it’s ok. Because I’m not leaving a mark on you, it’s ok.”

But strangulation can be a significant predictor for future, often lethal violence. If a partner has strangled you in the past, your risk of being killed by them is seven times higher. 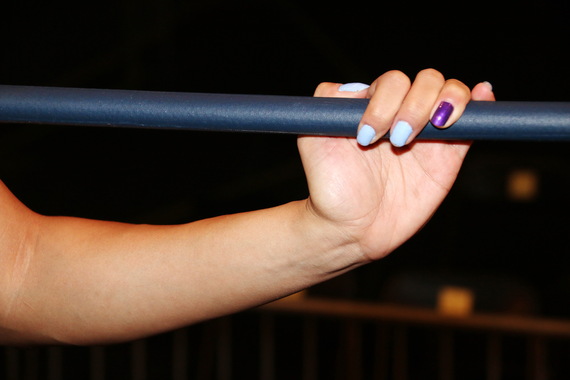 Jade's left ring fingernail is painted purple as her vow to end domestic violence and the silence around it via Safe Horizon's #PutTheNailinIt campaign. Photo Credit: Bob Mulrenin

Despite the violent abuse Jade says that she endured, some may see her as a contradiction. Many critics argue that professional wrestling promotes violence. And so how can Jade, a female wrestler, take a stand against domestic violence when she fights for a living?

For Jade, the answer centers on consent and safety. "We choose to get in the ring. We're trained to keep ourselves and our opponents safe. But when someone brings it back home, that’s not wrestling anymore. That is not entertainment. That is just straight abuse."

And experts caution against the “good victim” stereotype. Liz Roberts, deputy CEO of Safe Horizon, the nation’s largest organization dedicated to helping victims of domestic violence, states that the stereotype of a victim who has never initiated violence, is bruised and battered, and doesn't fight back is dangerous because it "undermines the rights and safety of domestic violence survivors everywhere."

Besides, Jade is a character.

The woman playing Jade, Stephanie Bell, only wanted empathy when she finally built the courage to disclose the horror she faced behind closed doors. "I just wish that, as wrestlers, when we claim that this is going on, that we’re not second-guessed, that we’re believed. The minute we mention it, it’s sensitive and we want some support."

But she wasn't always met with support. "His trainer, even some of our mutual friends thought I was exaggerating and making it up. When I filed the order of protection, his trainer tried to talk me out of it. He said that I was hurting my ex's career because I have a bigger name."

Jade and other TNA Knockouts (the name for female wrestlers in TNA Total Impact) show solidarity for Jade, and other survivors of domestic violence, by painting their left ring fingernails purple. Photo Credit: Bob Mulrenin

Jade’s story is unique because so often the focus around domestic violence and professional wrestling comes when a male wrestler is the abuser. The voice of the survivor is rarely heard. Perhaps the most infamous case is that of Chris Benoit who, in 2007, murdered his wife and young son before taking his own life. It left such a dark cloud over World Wrestling Entertainment (WWE) that they still often refuse to acknowledge Benoit as part of their history.

Today, wrestling companies seem to be taking swifter action when an arrest has been made. "We have a zero tolerance policy for domestic abuse. Upon arrest for such misconduct, our superstars are immediately suspended and should there be a conviction, that superstar... would be terminated," Stephanie McMahon, chief brand officer of the WWE told The Washington Post. Under this policy, wrestling legend and active WWE announcer Jerry "The King" Lawler was immediately suspended in June after he and his girlfriend were arrested on domestic violence charges. Charges were later dropped.

At TNA, the policy is not as clearly defined, but they have also indefinitely suspended talent who have been arrested on domestic violence charges.

This all comes on the heels of what happened with the NFL and Ray Rice in 2014 when TMZ released disturbing footage of Mr. Rice punching and knocking out his then-fiancée. The NFL faced criticism for its response. Sports leagues now knew they had to update their policies to avoid negative press.

While Jade was happy that companies were now taking a strong stand against domestic violence, she also expressed disappointment that it took such an extreme incident to prompt the change. "If Ray Rice’s wife would have said something about it without the video, how many people would have said we need to change policies? How many people would have believed her? It took her getting knocked out on TV for society to care and actually believe a survivor.” 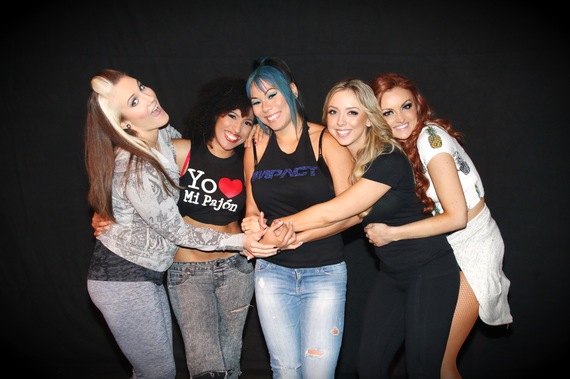 On TV they are rivals, but behind the scenes exists a sisterhood of support. [From left to right] TNA Knockouts Sienna, Marti Bell, Allie and Maria support Jade (centered). Photo Credit: Bob Mulrenin

However, Jade feels gratitude towards the company for which she wrestles. "TNA has always been supportive. My ex would work with TNA and once they found out I had the order of protection, they wouldn’t have him near me.”

In the locker room, what impacted Jade most were conversations with other female wrestlers. She viewed her female colleagues as strong, tough, and independent but she was shocked and saddened to learn that many others had also experienced abuse.

Jade found herself wanting to speak out, to give survivors everywhere — including herself and her friends — a voice. But she was afraid. Although she had an order of protection, she didn't want to draw attention to herself and risk her ex trying to contact her.

And she found that way to speak out without attracting too much attention. She learned about Safe Horizon's #PutTheNailinIt campaign which encourages all of us to paint our left ring fingernail purple to signify our vow to end domestic violence and the silence surrounding it. "I started getting more and more support from people who knew what the campaign meant or asked why my nail was painted. So, painting my nail became my secret way of telling the world 'I'm a survivor.’ And, so, the #PutTheNailinIt campaign helped me a lot. For the first time in a long time I felt support from other people. Now, I want other survivors to know 'I believe you.' It's ok to leave. It's ok to speak out. It's ok to seek help,” she said.

While the memories of Jade's abuse are painful, she is no longer allowing the issue of domestic violence to thrive in silence. 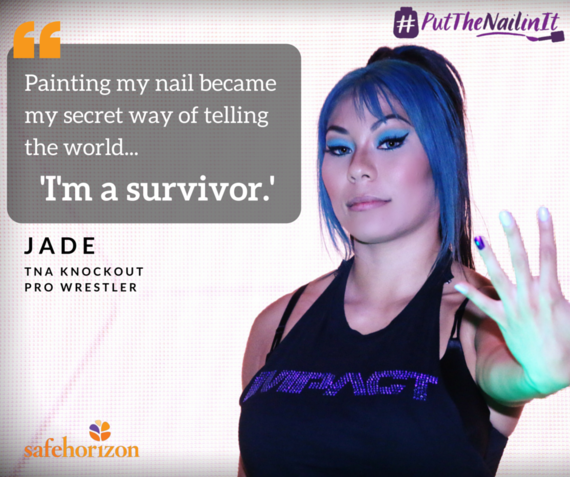 Have you taken the #PutTheNailinIt vow to end domestic violence? Visit www.putthenailinit.org to learn how your vow can help victims become survivors.