Masculinity is a complicated issue in the queer community.

One only has to log on to social networking apps like Grindr or Scruff to see phrases like "Masc4Masc" or "No Fems" splashed across various profiles -- all of which essentially shame queers for not embodying traditionally masculine ways of navigating the world.

And while ultimately no queer person should be shamed for wanting to embody a masculine aesthetic, the reality is that expectations and hierarchies of masculinity among queer people can easily reproduce systems of power and violence that our movement is actively fighting against and trying to break down.

Can we save masculinity from the patriarchy? That remains unclear. But party promoter and nightlife personality Rify Royalty wanted to create a space to celebrate queers who want to explore a more feminine or sissy side of their gender expression in a party context.

Thus, he created a monthly event in Brooklyn called "Straight Acting," the name of which is a tongue-in-cheek nod to gay men who use the phrase to describe their own reproduction of traditional notions of masculinity.

And that queer performance showcase is about to celebrate its one-year anniversary, sponsored by Scruff.

"As a society in general, masculinity is at the top of the hierarchy but something about that spilling over to a community thats already had to fight for acceptance didn't sit right with me," Royalty told The Huffington Post. "On the other hand, I wanted to create a show/party for nonconforming artists to showcase their work -- in a safe space."

The Huffington Post talked with Royalty this week about the evolution of "Straight Acting" and what he ultimately wants the event's attendees to take away from this celebration of feminized gender expression -- and fluidity -- among the queer community.

The Huffington Post: What's been your overarching concept or vision for "Straight Acting"?

Rify Royalty: My intention for Straight Acting was to raise awareness -- wake people up in our community. I was tired of hearing "Masc4Masc"  and "No Fems" on apps that were designed for queer people to meet one another. That dialogue was becoming a joke, but no one was doing anything about it so I figured I would. I knew calling the party "Straight Acting" would stir the pot a bit and it did. I figured it was controversial enough to be effective. I was never trying to "masc shame" anyone, there's nothing wrong with being masculine (whatever that means) but I was really trying to be more fem celebrating. As a society in general, masculinity is at the top of the hierarchy but something about that spilling over to a community that's already had to fight for acceptance didn't sit right with me. On the other hand, I wanted to create a show/party for non-conforming artists to showcase their work in a safe space.

How has the party changed and developed over the past year?

I was really inspired by London nightlife -- party spaces where everyone came together. Drag wasn't necessarily about impersonating women but about developing individual drag identities and performance. "Masculine" men were more willing to embrace the idea of dress up. It was always refreshing to see people having fun and making out in some form of drag. I originally set out to create a party for boys to put on heels and dress up and not worry about masculinity or being "passable drag queens" and I was seeking that in my performers as well. I also figured I'd include cis women as well since they, too, have had their obstacles in society's acceptance of how a "woman should behave." Eventually, the party kind of organically blossomed and all kinds of performers hit the stage from different gender, racial and performance backgrounds. The shows have included drag, rap, performance art, spoken word, burlesque and more.

What do you want people to take away from "Straight Acting"?

I want people to be more accepting of other people's art and identities. There's a big divide in the "boy culture" and drag culture in the queer scenes and I hope to somehow, someday bridge that gap. Gogo-drag, maybe? Who knows? I just want people to come out, dance, watch some shows, feel welcomed and go home with their minds blown. Or just blown.

"Straight Acting" is a safe space for performers, DJs and people who enjoy nightlife. The bar is usually filled with a mixed crowd of people from all over the world. When I hear "My friend told me about this party, so I had to check it out" -- that makes me happy.

And although posters usually say "Rify Royalty Presents," this is not my party. It's everyone's party.

The one-year anniversary of "Straight Acting" will take place at This n' That in the Williamsburg neighborhood of Brooklyn on Thursday, Oct. 22. Head here for more information and check out the slideshow below for photos from past editions of "Straight Acting." 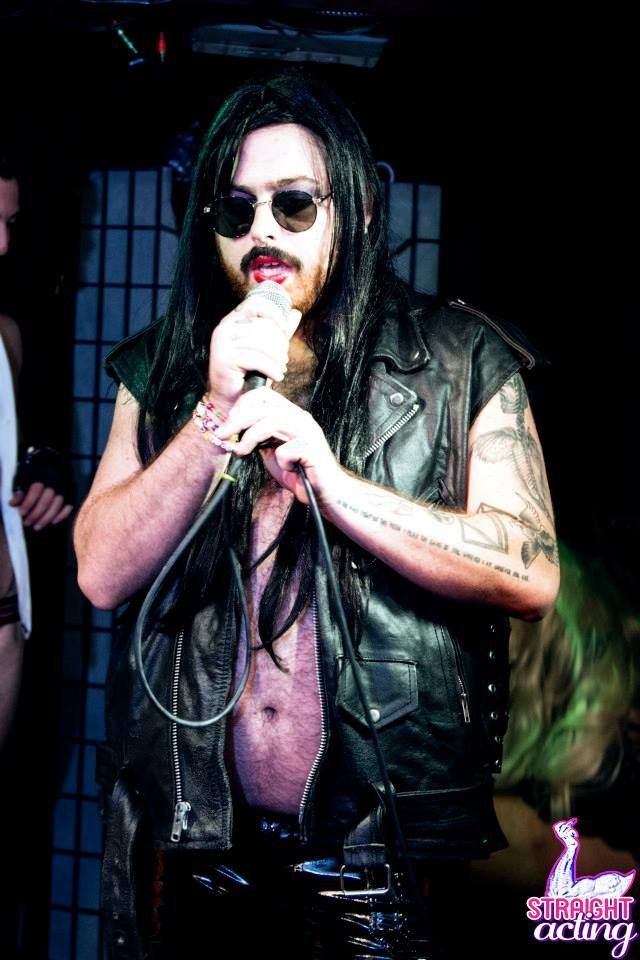