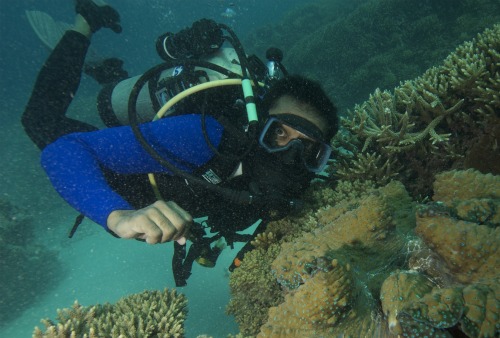 The author diving in the Coral Sea, off the Australian Coast.

A coral reef may save your life one day. Why have we done so little to return the favor?

The vast majority of medicines, from powerful narcotics to common headache pills, were derived originally from nature -- that's up to 70% of new drugs in the past couple of decades in the United States alone.

This is hardly surprising. Many animals, from chimpanzees to parrots, have been seen to search for favorite plants or mineral deposits during times of stress. Even our pet dog gets in the act, nibbling on grass perhaps to ward off tummy trouble. Perhaps our early ancestors watched and emulated.

Our earliest records of written history prescribe natural remedies for various ailments, and some have even made it into modern prescriptions. Best known is the common aspirin, a derivative of salicylic acid. Hippocrates, the father of modern medicine, knew this, and as far back as 400 BC. willow bark -- which contains salicin -- was prescribed for a host of aliments.

There is good reason for this attention:

Indeed, in the last few years, some important new drugs have been discovered and isolated from coral reefs. Those that show the most promise have been synthesized (essentially replicated) in the lab, tested and used in life-saving therapy. For example, Ara-C, isolated from Caribbean sea-sponge, is essential in chemotherapy. According to researchers at Stanford University, the sea squirt, an otherwise unremarkable blob of an animal, is providing huge breakthroughs in organ regeneration and bone marrow transplant. The cone shell, one of the most venomous animals on the reef (1,000 times more potent than morphine!), is being used as a painkiller, while marine derived SGN-35 is on the verge of FDA approval for non-Hodgkins lymphoma.

Unfortunately, we are also well on our way to wrecking our best new drug store. The World Resources Institute bluntly warns that over 75% of coral reefs are under threat.

There is no doubt that with careful collecting and testing, new cures will emerge from coral reefs.

As Dr. Bruce Chabner, an oncologist at Massachusetts General in Boston puts it, "the sea could well hold the building blocks of drugs that could treat, or even cure, cancer. We don't know. But if we lose the reefs we'll never find out."

The trick may be to link drug development and sales to conservation efforts. There is a terrestrial precedent. A couple of decades ago, the government of Costa Rica collaborated with the pharmaceutical giant Merck to develop a bio-prospecting scheme for its rainforests. Through INBio, a research institute, Merck paid for prospecting and promised to share in future revenues should any drugs from the forest prove to be a commercial success.

Implementing a similar system for coral reefs, often shared amongst several countries and scattered across millions of kilometers of ocean, will no doubt be trickier. Still, given that we extract fisheries and tourism revenues from reefs globally, it's not unreasonable to create a payment scheme for bio-prospecting particular reefs. The key, of course, is to ensure that the payment goes to reef conservation.

We can also as a society support increased government funding for coral reefs. One such bill, the National Endowment for the Oceans, sponsored by Senators Sheldon Whitehouse and Olympia Snowe and enjoying bi-partisan support, will (if passed) focus conservation attention onto reefs in U.S. waters. A similar effort, the Global Conservation Act, should it be introduced, will support reefs around the world.

Coral reefs offer us food, blunt storms and waves and bring in billions of dollars in recreation revenue. We now know that they also offer life-saving medicines.

In an era of spiraling health care costs, nature's most promising pharmacy is the only thing that is still free. We ought to take better care of it.