ADF is a multimillion-dollar Christian legal organization that's garnered national attention over the past several months thanks to its work defending anti-gay business owners who refuse to serve same-sex couples. It's been described as "the 800-pound gorilla of the Christian right," and media outlets are increasingly reporting on the group's legal efforts. ADF has become a fixture on Fox News, but its involvement in crafting Arizona's license-to-discriminate law in early 2014 attracted coverage from other networks as well. In October, New York Times columnist Ross Douthat apologized after he spoke at an ADF fundraiser.

But aside from a handful of examples, media outlets have failed to highlight just how extreme ADF's anti-gay agenda really is. While the group prefers to talk about its "religious liberty" work when in the media spotlight, ADF is actively working to promote and defend anti-sodomy laws that criminalize gay sex.

ADF's formal support for anti-sodomy laws dates to at least 2003, before the Supreme Court made its landmark decision in Lawrence v. Texas. ADF, which was at the time still known as the Alliance Defense Fund, filed an amicus brief in the case, defending state laws criminalizing gay sex. In its brief, ADF spent nearly 30 pages arguing that gay sex is unhealthy, harmful, and a public-health risk:

The issue under rational-basis review is not whether Texas should be concerned about opposite-sex sodomy, but whether it is reasonable to believe that same-sex sodomy is a distinct public health problem. It clearly is. [emphasis added]

In 2003, ADF president Alan Sears co-wrote a book titled The Homosexual Agenda: Exposing The Principal Threat to Religious Freedom Today, which warned that eliminating anti-sodomy laws would lead to the overturning of "laws against pedophilia, sex between close relatives, polygamy, bestiality and all other distortions and violations of God's plan."

The Supreme Court disagreed, striking down state bans on gay sex in its Lawrence v. Texas decision. But over a decade later, ADF continues to argue that Lawrence was wrongly decided. In 2011, ADF senior counsel Kevin Theriot criticized then-Secretary of State Hillary Clinton for making the case that "the freedom to engage in homosexual behavior" is a "basic human right." Theriot also wrote that "claiming a legal right to engage in homosexual behavior comes at the cost of religious freedom."

But while ADF has largely run out of options for promoting the criminalization of homosexuality in America, the group has taken its anti-sodomy agenda overseas. ADF's "Foreign Threats" page urges supporters to contribute to ADF's international efforts to "help stop devastating rulings" against religious freedom like Lawrence, which ADF claims "fabricate[d] legal protection for homosexual sodomy":

In December 2012, the Jamaica Coalition for a Healthy Society hosted an international conference titled "Human Rights, International Law and the Family" in Kingston. The event was aimed at discussing how the fight for LGBT equality -- including a legal challenge to the country's anti-sodomy law -- threatened "the traditional, natural family." Jeffrey Ventrella and Piero Tozzi, two senior legal counsels for ADF at the time, spoke at the conference. 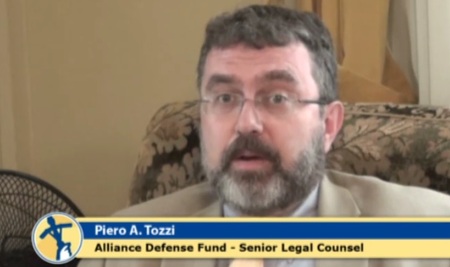 During his address at the conference, Tozzi spoke in defense of anti-sodomy laws, touting them as a "bulwark" against an unidentified "agenda":

The modes of behavior concerned affect most directly those who practice them, and are harmful not only spiritually and psychologically, but also physically.

It is also important to understand that the pressure to revise the penal law is part of a larger agenda, and that once the law is removed, the pressure will not stop, but the activists will move on to the next step in the agenda until there is full societal acceptance of the agenda.

Retention of the legislation prohibiting sodomy is the bulwark against this agenda: remove it, and I guarantee the rest of the agenda will follow within a matter of years. [emphasis added]

ADF has published several "Alliance Alerts" about the effort to repeal Jamaica's anti-sodomy law, including articles that describe gay sex as a harmful public health hazard.

While at ADF, Tozzi repeatedly defended laws criminalizing gay sex. In 2012, he went before Congress to condemn the United Nations Convention on the Rights of the Child for opposing anti-sodomy laws. He criticized the Obama administration for opposing Jamaica's anti-sodomy law, writing that the U.S. had "intervened in Jamaican domestic debates under the guise of combating 'homophobia.' " And in 2008, he published an article warning that decisions like Lawrence had moved America toward "sodomizing ... itself out of existence."

Standing with the pro-criminalization forces are U.S. groups and individuals that have rushed to join the fight. A local group, Belize Action, is headed by Waco, Texas-born Christian missionary Scott Stirm.

Belize Action's website has said repeatedly that lawyers supplied by both the ADF and the New York City- and Washington-based Catholic Family & Human Rights Institute (C-FAM) have joined the court fight. "The Christian Community has obtained the legal services of int'l attorneys Terry McKeegan, Piero Tozzi and Brian Raum from CFAM and ADF, International catholic [sic] and evangelical organizations that assist in fighting abortion and homosexuality cases internationally," said one such post.

Belize Action's Stirm has said that ADF provided his group "advice, legal assistance and strategy" in order to defend Belize's criminalization statute. Tozzi also recounted his efforts defending Section 53 during his address in Jamaica, stating that he had served as an adviser to one of the bishops defending the law.

In December 2011, India's Supreme Court voted to restore the country's colonial-era law banning "carnal intercourse against the order of nature." The ruling reversed a 2009 decision by the Delhi High Court, which found the law unconstitutional. Under India's criminalization statute, gay sex is punishable by up to 10 years in prison.

In an interview with OneNewsNow, Alliance Defending Freedom Global executive director Benjamin Bull applauded the Supreme Court's decision for not "giv[ing] in to a vocal minority of homosexual advocates":

"When given the same choice the Supreme Court of the United States had in Lawrence vs. Texas, the Indian Court did the right thing," says Bull, which was choose to "protect society at large rather than give in to a vocal minority of homosexual advocates."

The Texas case "laid the groundwork for the invalidation of traditional marriage by a number of courts subsequent to that," the attorney explains.

The Indian Supreme Court saw what had happened there "and was wise enough not to want to go down that road."

"America needs to take note that a country of 1.2 billion people has rejected the road towards same-sex marriage, and understood that these kinds of bad decisions in the long run will harm society," he adds.

Despite its record of promoting anti-sodomy laws both domestically and abroad, ADF continues to downplay its support for criminalizing homosexuality. When asked about ADF's support for laws banning gay sex, ADF vice president of media communications Greg Scott told Media Matters that "we have very little involvement in the types of matters about which you've reached out. Nor do we pursue them."

When pressed further about his organization's international support for anti-sodomy laws, like Bull's claim that Lawrence paved the way for same-sex marriage, Scott responded:

Bottom line: it doesn't matter what we think :)

Most of the recent marriage decisions in federal courts, particularly at the appeals court level, rely (sometimes heavily) on the findings in Lawrence.

But what ADF thinks about criminalization statutes does matter, especially in the countries where the group continues to advocate for anti-sodomy laws.

And it matters in terms of the media, which continues to treat ADF as a mainstream group fighting for "religious liberty." ADF has given up on promoting anti-sodomy laws in the U.S. afterLawrence, but the group still aggressively supports imprisoning gay people around the world for having sex. It's an ugly truth about one of the right's highest-profile legal organizations.

Failing to note ADF's support for anti-sodomy laws -- which places it firmly on the fringe of even conservative circles -- paints a grossly misleading picture of the extremism that motivates the group's anti-gay legal work.