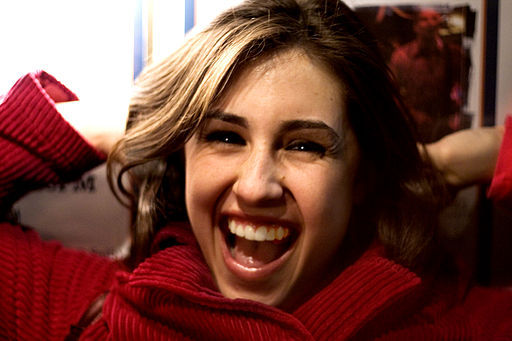 "At the height of laughter,
the universe is flung into a kaleidoscope of new possibilities."
-- Jean Houston

When I first heard about laughter yoga, I was skeptical and a bit creeped out by the idea of forcing myself and others to laugh. No jokes? I wondered how laughter could be generated without a sense of humor. What if someone is depressed or just doesn't feel like laughing? Some of the people I work with have been through horrible experiences. How dare I ask them to laugh? So many people hide behind fake smiles and laughter, so isn't pretending to laugh somehow inauthentic? Despite all of these doubts, I was intrigued enough to try a few laughter yoga exercises in the "Liberate Your Voice" group I was running at a treatment center for women with eating disorders. When the instruction was given to "speak to your partner in no known earthly language, just nonsense words," one of the most rigid, self-conscious, and serious participants started flapping her arms and shrieking something to the effect of: "Gru! Gru beeda! Mirk shoo frot! Waka Waka Waka!" Her startled partner was rendered speechless with surprise and the rest of the residents started laughing so hard that some had tears streaming down their cheeks.

This was the session that convinced me to get trained as a laughter yoga leader. If a few simple improvisation and breathing exercises could loosen inhibitions and help my clients connect with each other with such delight and playfulness, I wanted to know more! Since that day in 2007 I've used laughter yoga in many settings and with a wide variety of people, including several memorable classes for professional clowns. (Yes, even clowns need to clown around.) The use of laughter yoga to promote psychological, physical and spiritual wellness continues to spark my interest and amaze my clinical mind. Here are just a few snapshots from a very, very full album of exquisite moments:

The older gentleman in my laughter yoga training and I are laughing so deeply that we're literally holding each other up and soon have to sit down before we fall down. Arms around each other's shoulders, our breathing eventually slows and we bask in the afterglow of hilarity shared. As the training progresses, my heart opens to him as it seems to do with everyone I share laughter with. At lunch on the last day the discussion drifts into politics and religion. (I know, I know. What were we thinking?) But at the same time it dawns on us that we hold polar opposite views on just about everything political and religious, we realize that it doesn't matter. We have opened our hearts to each other, and we can never become enemies. It's a profound memory I recall every time my mind wants to turn someone into "one of them."

"Laughter connects you with people. It's almost impossible to maintain any kind of distance or any sense of social hierarchy when you're just howling with laughter. Laughter is a force for democracy."
-- John Cleese

The 20-something suicidal kid with multiple piercings turns to me and says with disbelief laced with admiration: "Lady, you are waaaay crazier than we are!" All the patients erupt into laughter as I grin and lead them through another laughter improvisation exercise. The feeling in the room has profoundly shifted since we first began. Depression, internal preoccupation, lethargy and isolation reigned supreme on this inpatient psychiatric unit when I first entered. After an hour spent laughing, dancing, singing and playing together, I'm surrounded by people who are smiling and connecting with one another. The kid who accused me of craziness and ended up leading us all in silly walking had said not one word in groups all week. The more traditional therapy groups I lead may be beneficial and necessary, but I know deep in my bones that this way of relating through laughter and play is essential.

As I lead the laughter yoga community class through the closing relaxation segment, I notice that one of the women is quietly crying. I silently guide her hands so that one hand rests on her chest and the other on her belly. Eventually a smile slowly dawns on her face through the tears. Later she shares with me that the earlier instruction to "send this warmth, this glow of goodwill, to someone who needs it" brought her estranged and recently deceased father to mind. "I imagined laughing with him the way we laugh together in here, and something hard and icy in my heart began to melt..." Laughter softens armor and invites healing in.

After I list the beneficial effects of laughter, I tell the room of recovering addicts that if I could put all of those effects in pill or powder form, I'm sure they'd buy it. "Or steal it!" one of the guys yells out. We laugh. Then I ask, "Can you buy the fact that you have the ability to change your internal chemistry through intentional laughter? Or that feeling good can happen from within?" The heavily-tattooed dude with the poker face isn't buying it. He folds his arms across his chest and I know he's thinking: "She is NOT going to get me to laugh." He refuses to participate in the session, but in watching the rest of us can't help but crack more than a few smiles and even lets loose once or twice with a genuine belly laugh. As the session ends and the participants file out of the room, he catches my eye and sends a nod and a genuinely warm smile. Laughter - 1, Terminal Coolness - 0.

The couple has slipped back into their familiar communication trance of anger and blame, defensiveness and withdrawal. One of the techniques I've taught them to use when they want to interrupt the old destructive pattern is to speak in gibberish. Without me having to ask, the wife gets a gleam in her eye and abruptly breaks into an impassioned stream of nonsense words, which is soon answered in kind by her husband. They go at it for a few minutes, upping the intensity factor into melodrama until first one, and then both of them, start to laugh. The spell is broken, they chuckle lightly together, and then resume the discussion absent of their previous rancor and with considerably more kindness toward each other.

"Laughter is the shortest distance between two people."
-- Victor Borge

The founder of laughter yoga, Dr. Madan Kataria, says he wants to change the world through laughter. His long range goal is world peace. I'm in.