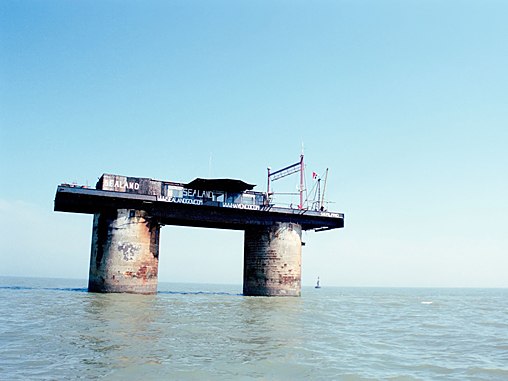 The Principality of Sealand has its own flag, a white diagonal stripe dividing fields of red and black. It has currency, postage stamps, a national anthem ("E Mare Libertas," which is also its national motto, meaning "from the sea, freedom"), and even a soccer team. Never heard of Sealand? That's not a surprise. It's a concrete dot in the North Sea roughly the size of two tennis courts, and it's never been recognized by any other nation on Earth. But that never bothered its eccentric founder, Paddy Roy Bates.

In 1967, Bates was a pirate radio broadcaster looking to operate a radio station untroubled by the then-strict regulation of the British airwaves. To that end, he occupied HM Fort Roughs, a Royal Navy fortification that had been built seven miles off the coast of Suffolk during World War II as a platform for anti-aircraft artillery. When maintenance workers approached the fort in 1968, the Bates family opened fire with a shotgun, beginning a fine tradition of Sealanders taking pot-shots at passersby.

A court found that because the fort lay outside Britain's three-mile limit of territorial waters, Her Majesty's government had no jurisdiction over the incident. This decision inspired Bates to declare his "nation" 's independence, rechristening Fort Roughs as the Principality of Sealand and crowning himself its first head of state, Prince Roy I.

The new nation faced its toughest international challenge in 1978, when a German lawyer named Alexander Achenbach stormed the marine platform, took Bates's son Michael hostage, and declared himself Prime Minster of Sealand. The coup failed when Prince Roy led a daring helicopter raid to retake his country, but Achenbach's group still considers itself the rightful leaders of Sealand, and runs a "government-in-exile" from Germany.

Sealand's original government is also an absentee one nowadays. Prince Roy died last October, leaving the throne to his son Michael. But Prince Michael lives on the mainland, in Essex, so the Principality of Sealand currently has a population of one: a caretaker who lives on the platform. The nation's main source of income continues to be the online sales of mugs, t-shirts, and even peerages -- you and that special someone can become Count and Countess of Sealand for just $320! But in 2012, Sealand announced it was beginning a new tourism industry, for visitors dying to see one of the world's weirdest micronations. Be warned, however: To come ashore at Sealand, you'll have to be lifted out of your boat on a winch. After a long history of invasions, the fortress has no ladders.