Every time I hear that a policeman has killed another unarmed black man in the United States, I think about how lucky I am to be alive.

My first interaction with police occurred in the fall of 1995, a few months after I arrived from Kenya. I had just bought my first car. One evening, my cousin asked me to drive him and three high school friends -- two white girls and a white male -- to a video arcade in Milpitas, California. As I pulled into the parking lot, I noticed a police car behind me. The officer followed us as we circled the parking lot looking for a spot. I parked the car, got out and began to walk towards the door.

Two hours later, we left the arcade. As I drove to exit, I noticed a police car behind me. As soon I got on the street, I saw red and blue lights and heard a siren. Before I could pull over, bright flashlights shone directly in my face through the windshield. I stopped in the middle of the street.

An officer on a megaphone began orders. "Turn off the engine. Put hands on your head. With your right hand, roll down your window. Reach over with your right hand and open the door from the outside. Step out of the car. Slowly. Walk backwards."

After a few steps, two officers tackled me to the ground violently and handcuffed me behind my back. They went ransacked my pockets. When they were satisfied that we were not criminals they told me that someone had reported that a vehicle resembling mine was stolen.

For the next 10 years, I didn't protest dozens more cases of such harassment and maltreatment by police. I kept quiet because because I didn't know that as an immigrant I had any rights. I also compared America to Kenya -- where even a minor infraction could land you in jail unless you had a bribe -- and concluded that American cops were saints. 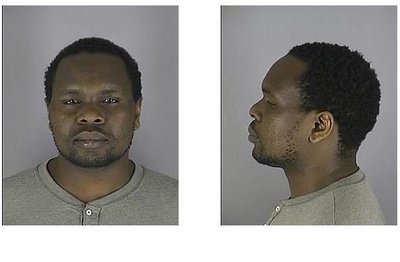 I turned my head, and immediately the officer patting me down squeezed my testicles hard.

But in 2004, I enrolled in a university to study journalism, and my views began to change. I learned that the U.S. constitution accords the same civil rights to all people in the country, regardless of their origin or immigration status. I began to get vocal against my harassment by police. That's when the nights I have spent in jail began.

The scariest of those nights was in the spring of 2008 in Minneapolis, where I had moved to for a job. Earlier in the night, Bill Santiago, a friend I knew from doing comedy in California, had invited me to perform with him at Acme Comedy Club. After the show, I rushed out to catch a bus home. Outside, I ran into Andy Peters, a comedian from Seattle, who had performed with us that night. He, too, was running for the same bus.

We missed the last bus and decided to share a taxi. I stayed back at the bus shelter because as a white man, Peters was more likely to get a taxi to stop. One stopped. He entered. I opened the rear door and sat behind the driver.

"Are you guys together?" the cab driver asked.

The driver asked where we were going. We gave him two destinations. He asked why we weren't going to the same place. We told him we didn't live together. He asked for $20 cash. I gave him a $20 bill. As he began to drive away; I asked why he didn't have the meter running.

"You agreed to the deal," he answered.

I had taken a taxi home from the same area many times and my fare was usually under $10. But I gave the driver $20 that night because I had learned that some drivers only accepted cash and would demand $20 up front, run the meter, and you change at the end of the trip. I told the driver that he was ripping us off. He pulled over.

I asked him for a receipt, which he gave me. As he began to drive again, I told him that I would file a complaint against him for ripping us off. He quickly pulled over.

We could have gotten out, but it was cold and snowy. I told him that I might decide not to lodge a complaint if he just drove us home.

"Get out, or I will call the police," he barked.

Before we could decide what to do, he called 911. We decided not to leave, fearing that we might become fugitives for crimes we didn't commit. While on the phone with the 911 dispatcher, the driver saw a police officer about a block away. He ran off and left us waiting in the car. A few minutes later, the cabdriver and the officer approached us. The policeman pointed his taser gun at us and threatened to use it on us if we didn't exit the car. Peters and I jumped out. With the taser still pointed at us, the cop ordered us to get out of the area. As we walked away, we protested that he hadn't given us a chance to tell our story.

"Do you wanna go to jail?" he asked as we walked backward away from him.

"Go to jail for what?" Peters asked.

"Do you want to go to jail?" the cop asked again.

I asked the cop for his badge number, a request I knew was within my rights.

"Open your mouth one more time, and you'll go to jail," he threatened.

As we walked away, I turned to Peters and said, "Remember his squad car number is 989. We have to file a complaint."

The officer rushed towards me and pointed the taser at me.

"Get on the ground," he barked.

I dropped down into the sludge of melting snow. He handcuffed me and ordered me to stand up. I tried to, but I fell because the ground was too slippery. I asked the cop to help me to my feet. He pointed the taser at me and told me to get up again. I made a second attempt but failed again. Another cruiser pulled up. Two cops stepped out. One walked towards us and helped me to my feet. The other went to Peters, who had been protesting my arrest from a distance.

"Keep walking, or you're gonna go to jail," the cop told him.

The two cops walked me to the front of a squad car. The arresting officer ordered me to face the car, spread my legs apart, and not turn my head away from the windshield. He put on latex gloves and began to empty my pockets. As he frisked me, I heard Peters ask why one of the cops had a laser beam from the taser focused on the back of my head. I turned my head, and immediately the officer patting me down squeezed my testicles, hard.

"I told you not to turn your head," he said.

When a man gets kicked or squeezed in the testicles, painful cramps travel from there through the abdomen. As the pain shot through me, I defied him and turned my body around. I looked at the cop in disbelief. I wanted to kick him right where he had squeezed me, but something told me not to. I bit my lower lip hard and tried not to cry. I couldn't. I let tears roll down my cheeks.

The officer took me to jail for disorderly conduct, resisting arrest, and failing to pay a taxi fare I had already paid. When Peters came to bail me out in the morning, he was shocked to learn that the officer had taken away the receipt that could have proven my innocence.

Every time I hear that police have killed an unarmed black man, I think about how differently things would have turned out for me. What if my window couldn't roll down that night a Milpitas cops ordered me to reach over with my right hand to open the door from the outside? What if instead of turning my pain and anger into tears, I had turned around violently and kicked that Minneapolis cop for squeezing my testicles?