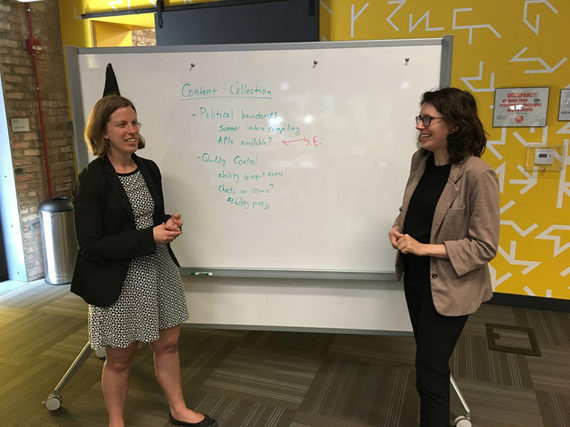 With the presidential primary election looming, Chicago public school teacher Megan Augustiny introduced her high school civics students to BallotReady, an online guide to down-ballot races. (Think: state attorney, judgeships, city council -- candidates that first-time voters in her class had never heard of, but would soon be electing to office). The nonpartisan site compiles essential information that voters need on little-known candidates -- their job experience, positions on controversial issues and endorsements accrued -- making it easy for students (and all voters) to "access information in the way they are used to," she says, favoriting contenders as if their sample ballot were an Instagram feed.

Which is just what Alex Niemczewski and Aviva Rosman, two recent University of Chicago grads who co-founded BallotReady, had envisioned. Both are reserved, heads-down types who prefer to focus on their work, speaking softly about their high-minded ideals of involving more people at all stages of the democratic process. The two built the site in their spare time and spent just $180 on marketing to launch BallotReady. Within a few months, it irreversibly changed voter behavior across Illinois, where thousands of people logged on to the site. During this year's bombastic election season, instead of skipping many of the contests, or worse, casting an uninformed vote, BallotReady users now have at their fingertips valuable information about local and regional candidates that are virtually unknown to most people.

For a glimpse of BallotReady's reach, all one needs to do is log on to Twitter on Election Day.

.@BallotReady thx to you, for the first time ever, i feel informed about my vote for Metropolitan Water Reclamation District Commissioner :)

.@BallotReady Thanks for helping me be smart about this privilege. #vote #chicago #YourVoiceMatters pic.twitter.com/GrnmD3isG6

In states where it's active, BallotReady is so popular that politicians ask to add specifics to their profiles, offering new possibilities for local campaigns that are too small to attract media coverage or buy their own advertisements. If a school board member sees her opponent vows to support a charter school expansion, for instance, the incumbent may add more details to her education platform. "If a candidate says, 'I support education,' we don't include that, because everybody does," Niemczewski says. Although, "if a candidate didn't support education, we would include that," she adds.

BallotReady emerged from a collision of two pasts: Rosman's as an enthusiastic electioneer and Niemczewski's nonprofit work, as well as her knack for code. A self-avowed political junkie, Rosman started participating in the political process in middle school, driving with her dad from their native Massachusetts to New Hampshire and attempting to sway the state's swing voters every election. In 2004, she nearly failed two high school classes when she used frequent flier miles to campaign for John Kerry in Florida. Four years later, while staffing a congressional race in Illinois, Rosman realized her knowledge was severely lacking. "I was trying to inform people about my candidate, and yet, I was unprepared to vote for all these other people on the ballot," she remembers. Then in 2014, Rosman ran for a seat on the school council in Chicago. She asked Niemczewski, an old classmate then coaching Chicago's unemployed into IT jobs, to vote for her. "I didn't even know there was an election," Niemczewski says, admitting to missing the vote. The two stayed in touch and a few months later, collaborated on the guide that developed into BallotReady.

More than 160,000 voters in Illinois, Virginia, Kentucky and Colorado have used BallotReady to inform their choices -- a 10-fold growth from its launch last fall. The site is expanding its reach, developing profiles for candidates in Maryland, New Hampshire and Florida. Scaling hasn't been easy: "It takes a lot of phone calls and relationship-building. That's kind of daunting," Niemczewski says, noting that 100 volunteer curators are needed to build candidate profiles, "but it's also exciting, because it means we can really help." By year's end, BallotReady hopes to reach 1 million voters, and by 2020, to be in every state.

Since BallotReady is committed to educating every American citizen, it devotes resources to eliminating digital access issues that arise. Once, Niemczewski responded to a request from an elderly woman in an assisted living center. After the woman reported being unable to load BallotReady, Niemczewski troubleshot the problem by backdating the site's functionality, so the senior citizens could use it on their outdated computers.

Ultimately, BallotReady's founders work to make their innovative site as user-friendly as possible -- to both the older electorate and young, first-time voters alike. That mission is just one of the reasons why teachers like Augustiny thinks that its online repository of candidate profiles is a great way to get Millennials more involved in elections. "The Internet is so pervasive at this point: it informs everything that we do, especially for younger people. Not having that information readily accessible online was a real disservice to young people," she says.

As a teacher, Augustiny always wants her kids to develop in-depth research skills. But when it comes to voting -- an activity that's made so many Americans apathetic -- she's in favor of turning to BallotReady for a digital shortcut.

This article is part of the What's Possible series produced by NationSwell and Comcast NBCUniversal, which shines a light on changemakers who are creating opportunities to help people and communities thrive in a 21st-century world. These social entrepreneurs and their future forward ideas represent what's possible when people come together to create solutions that connect, educate and empower others and move America forward.