Seven days, lots of science in the news. Here's our roundup of some of the week's most notable and quotable items. 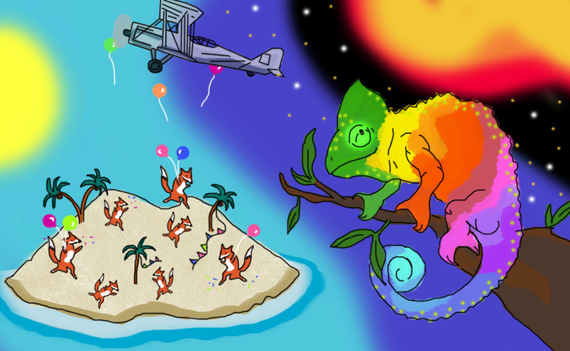 Scientists discovered how chameleons change colors: by controlling the spacing of tiny crystals in their skins.

The star US708 is zooming through space at 746 miles per second -- the fastest star observed in our galaxy; at that pace, it will exit the Milky Way in a mere 25 million years. (If we could attain that speed, we could make it from the Earth to the moon in five minutes.)

NASA confirmed there is a water ocean on Jupiter's moon Ganymede. Saturn's moon Enceladus seems to have hydrothermal activity going on in the southern reaches of its ocean.

A newly discovered galaxy is spewing way more gamma rays than expected, raising the possibility that it could point the way towards confirming the existence of dark matter.

People with gout are less likely to develop Alzheimer's disease.

Rare photos of a tiger family out in the wild captured something even rarer: a tiger dad who helps out with raising the cubs.

Channel Islands foxes in California may have recovered enough to be removed from the endangered species list.

A solar-powered plane took off from Abu Dhabi, starting off on the first attempt to circumnavigate the globe flying on energy from the sun.

There's a new hypothesis for how Devils Tower was formed.

Mummies that had been preserved for more than 7,000 years in the deserts of South America are turning into "black ooze" thanks to increasing humidity blamed on climate change.

Did the "Age of Man"--aka the Anthropocene--begin in 1610? There is disagreement among geologists, but some are making the case that human beings really started to effect the Earth around the time of the "'New-Old World Collision' (when Europeans began traveling to the Americas in earnest)."

Venom from genetically modified spiders could be the key ingredient to the next generation of impotence drugs.

Study of a 600-million-year-old sponge suggests our very early ancestors may have been around earlier than we've been thinking.

It's probably safe to eat snow.

Next Friday Europe will experience its biggest solar eclipse since 1999.