Anglo-French Fleet in the Canakkale Narrows, The Dardanelles, March 1915

The Dardanelles is 38 miles long and connects the Sea of Marmara with the Aegean. At Cape Helles, at the Aegean entrance, the straits are two miles wide and were guarded by several Ottoman forts manned with sixteen heavy and seven medium range guns. The straits progressively widen to about four miles before shrinking to less than a mile at the Canakale Narrows, between Kephez and Chamak, about fourteen miles in from the entrance. At this bottleneck the Turks had placed seventy-two heavy guns and laid eight separate belts of mines. Once past this gauntlet, the fleet could proceed to Constantinople with little opposition. 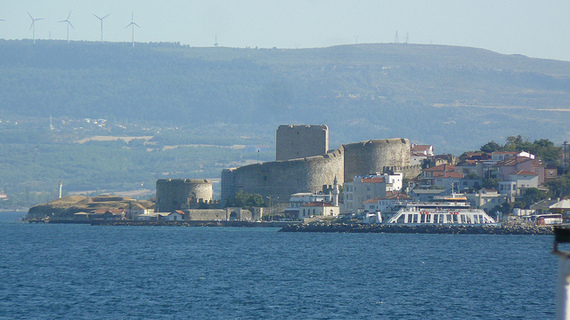 Turkish Fort on the Dardarelles

The attacking force was under the command of Vice Admiral Sackville Hamilton Carden and led by the Royal Navy's newest dreadnought class battleship, Queen Elizabeth (eight, 15-inch guns), and the battle cruiser Inflexible (eight, 12-inch guns). Twelve additional pre-Dreadnought battle ships, eight of which we due to be scrapped in the next 12 to 18 months, made up the attack force. Four additional, older French battleships also joined the force. The fleet was based on the Greek island of Lemnos, just 50 miles away from Cape Helles.

The attack plan was straightforward. The fleet would proceed to the entrance of the straits and use their big guns to destroy the forts. Once the big guns were silenced, two battalions of Royal Marines would be landed at Cape Helles to finish off any remaining opposition. With the entrance secured, the fleet would proceed to the narrows and again, using long-range gunfire from the naval guns, reduce the Ottoman forts and their artillery. Under cover of the bombardment the "minesweepers," actually trawlers manned by civilian crews, would clear away the mines in the Narrows and allow the fleet to proceed to Constantinople.

The first bombardment began on February 19, but was then suspended for a week because of bad weather. It resumed on the twenty-fifth and continued through the twenty-sixth. The forts at the entrance were quickly overcome and by the morning of the twenty-seventh, the fleet, minus the Queen Elizabeth, proceeded to the Narrows. The Queen Elizabeth had been held back to cover the rear of the Anglo-French fleet and also as a precaution after the sinking of the HMS Goliath by a Turkish torpedo boat.

Mine clearing proved difficult. In the Narrows, the minesweepers were fighting an 8-knot, southwesterly current that allowed them little forward progress. Even with the covering fire of the big guns, they were vulnerable to attack. Despite repeated attempts, they could not clear the minefields. The "minesweepers" were in fact civilian fishing trawlers from the North Sea manned by civilian crews. The modern version of a minesweeper, complete with powerful engines, would not make their appearance for another year.

On March 18 the flotilla, now under the command of Rear Admiral John de Robeck, decided to proceed through the Narrows, regardless of the minefields and, guns blazing, attack the Turkish forts. The attack began at 11:00 am, and by 2:00 pm. the Ottoman big guns began to fall silent. De Robeck now ordered the French ships to withdraw and his reserve ships to take their place. As she was steaming south, the French ship Bouvet hit a mine in a hitherto unknown field and promptly sank with the loss of 600 men. Inflexible was the next casualty, hitting a mine that caused her forward compartments to flood and forcing her to withdraw. Fifteen minutes later Irresistible hit a mine, flooding her engine compartments and leaving her adrift. Several hours later, Ocean hit a mine and also sank. Unable to proceed further, de Robeck withdrew his force. 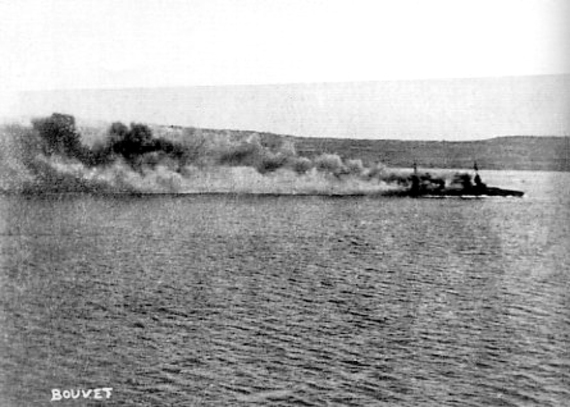 Bouvet Sinking after Striking a Mine, The Dardanelles Marc h 18, 1915

That should have been the end of the operation, but it wasn't. Missions sometimes take on a life of their own. Kitchener, who initially had vetoed the use of ground troops, now reversed himself and ordered a new attack by a combined land and naval force. Control of the operation passed from the Royal Navy to the British Army.

The Allies immediately started preparations for an amphibious assault on the Dardanelles. This would be an unprecedented, combined operation involving both the fleet and land forces. It would be the largest amphibious operation hitherto mounted. More than 200 ships and 75,000 men and their supplies were assembled in Egypt. The force consisted of a British Division, an Australian and New Zealand Corp, (the Anzac) and one French division. Most of the men were raw recruits. The plan was to seize control of the Gallipoli peninsula and attack the Turkish forts from the landward side. From the very beginning nothing would go right for the Allies.