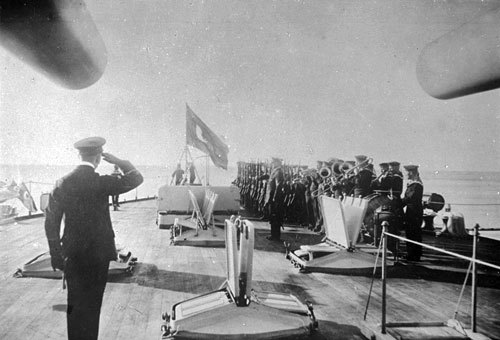 Transfer of the German Cruiser Goeben to the Ottoman navy

The Ottomans Enter the War: Part ISee also the supplemental background brief: "The Ottomans, Sykes-Picot and ISIS which is being posted concurrently with this week's commentary.

The Ottoman Empire signed a secret Ottoman-German Alliance on August 2, 1914 in which the Ottoman Empire agreed to enter the war one day after Germany declared war on Russia. Sultan Mehmed V refused to sign the agreement, however, preferring that the Empire remain neutral in the coming conflict. As the Sultan was also the Commander in Chief of the military, Ottoman forces could not be deployed without his permission.

Just two weeks after the start of the war, two German ships, the heavy cruiser Goeben and the light cruiser Breslau arrived in Constantinople. The German government promptly donated them to the Ottoman Empire. The ships were renamed the Yavuz Sultan Selim and Midilli. The German officers and crew remained, now part of the Ottoman navy.

Elements in the Turkish military now took matters into their own hands and ordered the two ships to sail into the Black Sea. On October 29, they attacked Russia's Crimean port, Sevastopol. Despite the Ottoman Government protestations that the ship had acted without authorization and an offer to pay reparations to Russia, the Russian government used the incident as a pretext to commence hostilities against the Ottoman Empire.

The attack prompted a Russian declaration of war on November 2, and was followed by French and British declarations several days later. On November 6th, British forces landed in the Shatt al-Arab and took control of Basra and its surrounding oil fields. The Sultan's reluctance notwithstanding, the Ottoman Empire was now at war.

The Caucasus TheaterThe Caucasus Campaign was a series of armed conflicts between the Ottoman Empire and the Russian Empire, including Armenia, Azerbaijan and the Central Caspian Dictatorship, between 1914 and 1917. The theater extended from the Caucasus to eastern Anatolia; reaching as far as Trabzon, the historic Trebizond, Bitlis, Mus and Van. Warfare on land was accompanied by naval action between the Russian and Ottoman navies in the Black Sea.

The main objective of the Ottoman government in the Caucasus campaign was to retake the territories lost to Russia in the war of 1877. These territories were Artvin, Ardahan, Karsand, and the port of Batumi. For Germany, a Caucasus campaign served the additional purpose of diverting Russian forces from the Polish and Galician fronts and further complicated Russian war planning. Success, the Germans and Ottomans believed, would ignite a revolt of Caucasian Muslims and the Turkic people of central Asia. It would cut off Russian access to oil fields in the northern Caspian Sea and possibly spread to the Muslim population of British India.

Russia viewed the Caucasus as a secondary theatre to the Eastern Front, but was concerned about Ottoman ambitions to retake Russian conquests from the 1877 Russo-Turkish war. Notwithstanding its secondary importance, Russia had grand plans, for which it sought British and French support, to take control of Constantinople, the Turkish Straits, and a broad expanse of land from the Black Sea coast of Anatolia through Thrace and south to Izmit.

Turkish forces consisted of the 3rd Army, composed of the IX, X and XI Corps, numbering between 150,000 and 200,000 men. They outnumbered Russian forces in theater by about 3 to 1, but were poorly equipped. Russian Forces in the region, initially, numbered about 100,000 men. They were under the nominal command of Illarion Vorontsov-Dashkov, Governor General of the Caucasus, but his Chief of Staff, General Nikolai Yudenich, was effectively in charge. Following the defeat of Russian forces at the Battles of Tannenberg and the Masurian Lakes, almost half of the force was transferred to the Eastern Front, leaving approximately 60,000 troops. Russian troops were supplemented by the creation of Armenian volunteer units. By 1917, these volunteer units numbered around 110,000 men. 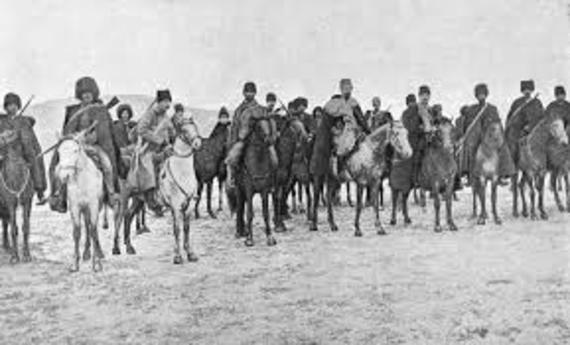 Russian forces commenced offensive operations on November 1, a day before the official Russian declaration of war. The Bergmann Offensive, named after General Georgy Bergmann, the Commander of the Caucasian Army Corp, planned to capture Dogubeyazit and Koprukoy in Eastern Anatolia.Russian forces consisted of 25 infantry battalions, 37 cavalry units, and 120 artillery units organized into two corps, the Russian I Corps and the Russian IV Corps. 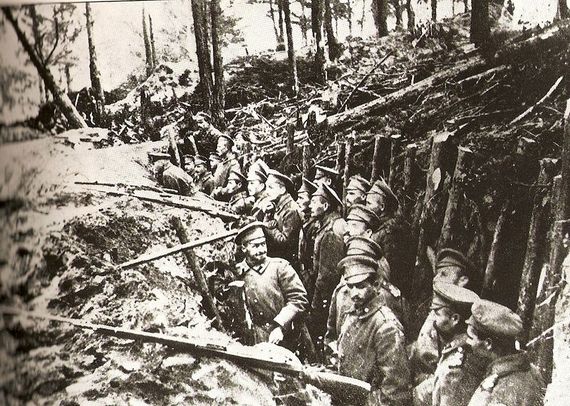 They reached Koprukoy on November 4. Initial Ottoman counterattacks failed and were forced back, extending the Russian advance. Bolstered by additional reinforcements, Ottoman Forces began a second series of counterattacks beginning on November 7, and by November 20 had retaken Koprukoy. By the end of November, the front had stabilized with the Russians clinging to a 15-mile salient along the Erzrum-Sarikamis axis.