World War I Around the World

Part I: The War in Asia & the Pacific 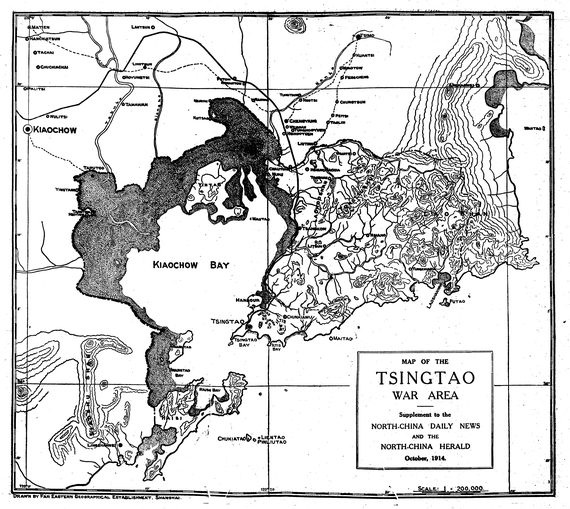 The German Colony of Tsingtao

Germany had a significant colonial interest in China as well an assortment of island colonies spread out across the western Pacific. Additionally, Germany had a naval squadron, the East Asian Squadron, headquartered in the Chinese port of Tsingtao.

Most of the Pacific colonies capitulated with a minimum of fighting. Early in the war, Australian land and naval forces engaged German colonial forces in New Guinea and took control of the archipelago as well as other German island colonies in the Pacific. Naval warfare in both the Pacific and Indian Ocean was widespread. 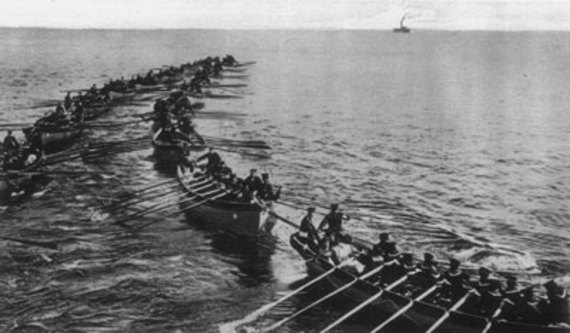 The Siege of Tsingtao in 1914, probably the most significant engagement of the Asian theater, was the first military encounter between Japanese and German forces. It also saw the first joint Anglo-Japanese operation of the war.

The eastern Chinese city of Tsingtao, today known as Qingdao, was garrisoned by 4,000 troops. The German Navy's East Asia Squadron, based there, represented a significant naval force although, at the time, most of its ships were dispersed throughout the Indian Ocean and Western Pacific.

On August 15, Japan issued an ultimatum demanding that Germany withdraw its warships from Chinese and Japanese waters and cede control of Tsingtao to Japan. Three days later, the ultimatum expired and Japan declared war. Bombardment of the port began on September 2. The Japanese General Mitsuomi Kamio, who had 23,000 men supported by 142 guns at his disposal, promptly besieged the German held city. 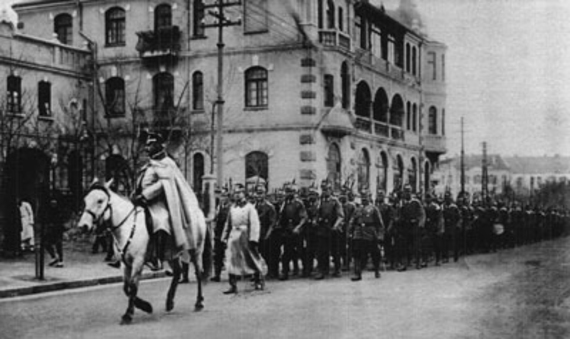 German Troops at the Battle of Tsingtao

The British, although formally allied with Japan, were suspicious of Japanese motives. They sent 1,500 troops, ostensibly to assist the Japanese, but in reality also to keep an eye on the engagement. Kamio favored night raids and avoided the kind of bloody frontal assault that was to become common thousands of miles away on the Western Front.

The German garrison was outnumbered by six to one, yet managed to hold out for over two months before surrendering on November 7. They handed over the port three days later. Germany had lost two ships in the fighting, 727 men killed and 1,335 wounded. When defeat seemed certain, the balance of the East Asian squadron, four small gunboats, had been scuttled. 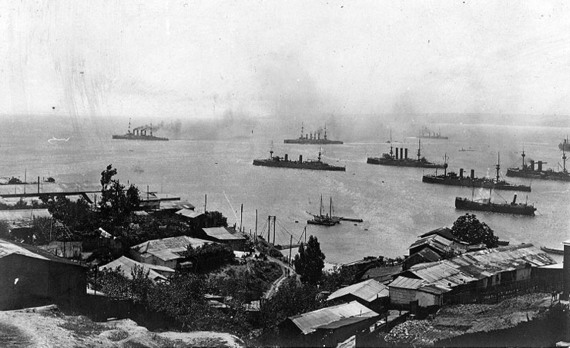 The balance of the East Asia Squadron along with a number of additional German ships clashed with the Royal Navy in the Battle of Coronel and the Battle of the Falkland Islands. The Battle of Coronel, fought off the coast of Chile, resulted from a search by Admiral Sir Christopher Cradock's West Indies Squadron for a German commerce-raiding squadron operating under Admiral Maximilian von Spee in the Pacific Ocean.

Cradock's forces were no match for Spee's five-vessel force, which included the armored cruisers Scharnhorst and Gneisenau and three light cruisers. Battle commenced unexpectedly early on November 1, 1914, and resulted in the outgunned Cradock losing his flagship Good Hope and the armored cruiser Monmouth with all hands and his own life. When news of the humiliating defeat reached Britain, the Admiralty assembled a powerful naval force under Admiral Sir Frederick Sturdee to exact revenge on Spee. 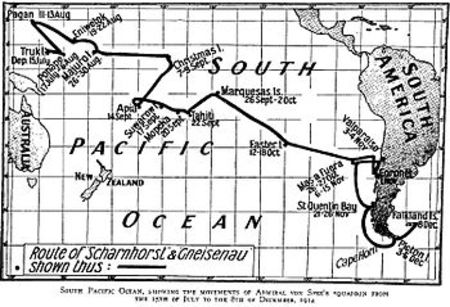 Track of Spee's Squadron in the South Pacific

The result was the Battle of the Falkland Islands, which began on December 8, 1914. Spee had sailed for the islands with the aim of destroying the British radio station and coaling depot. He was unaware that the powerful British cruisers Invincible and Inflexible were already at Port Stanley, accompanied by six other cruisers. Spee, mistaking the British ships for Japanese ones, began his attack but soon realized his error and made for the open sea, pursued by the British. During the ensuing battle four German cruisers, including his flagship Scharnhorst, were sunk and 2,200 sailors were either killed or drowned.