World War I wrought unprecedented changes across the social fabric of Europe and North America. Not only were there the economic consequences of a ruinously expensive war, the horrendous death total and the even greater number of wounded, but the very war itself raised doubts about the legitimacy of the old order and the relationships that under laid it.

Women, for the first time, joined the industrial labor force in unprecedented numbers. Their role was to replace the men fighting on the front lines, and to maintain the production of the stream of war materials needed by the troops. Having done their part to win the war, the women's suffrage movement would take on a new strength and purpose that would ultimately result in the granting of women's suffrage in most of the developed world.

Great Britain and France would draw heavily on their colonial subjects for manpower during the war. French colonial regiments fought at Verdun, and in every major French engagement on the Western Front. Empire troops, and especially the Indian Army, saw service from the trenches of Flanders to the deserts of Persia and Mesopotamia. Having watched their comrades die in defense of European liberty, those colonial soldiers would invariably pose the question, "what of our own liberty?" A question made all the more pressing when Woodrow Wilson would declare, in his Fourteen Points, "a people's right to self-determination." 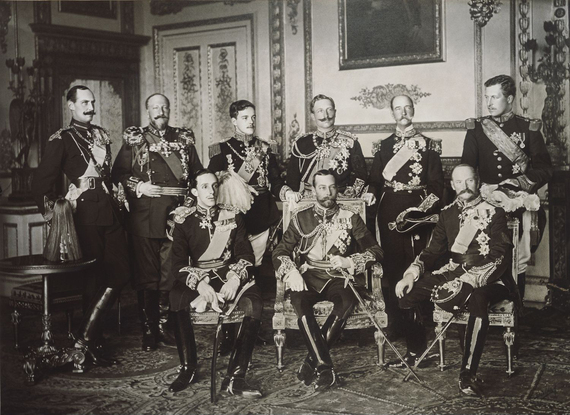 The Nine European Sovereigns at the Funeral of Edward VII, Windsor Castle, 1910

Throughout the length of Europe, national patriotism was increasingly tempered by the realization that it was the reigning elites, their decisions and actions that ultimately would have to shoulder the responsibility for precipitating the catastrophe of the war. By what right did the old order rule? Judging by the war and its outcome, certainly not because of their wisdom, experience or prudence.

As the legitimacy of the old order came into question, the bonds of subservience and obligation that had supported it steadily unraveled. There was no way that the divine rights of emperors and tsars could be reconciled with the rights of the workingman. One would have to go. Four imperial dynasties would vanish in the wake of the war. The world would never be the same.

Russia: The Fall of the House of Romanov

In August 1914, the command of all the Imperial Armies was placed in the hands of the Grand Duke Nicholas, the Tsar's second cousin. He was a professional soldier and was considered an able commander. Many of the generals under his command, however, were both scheming and incompetent. His troops were untrained and mostly illiterate. The army was chronically short of guns and ammunition. There was no motorized transport beyond approximately 680 cars reserved for the use of senior officers. There were two ambulances in the entire Russian army to transport the wounded. 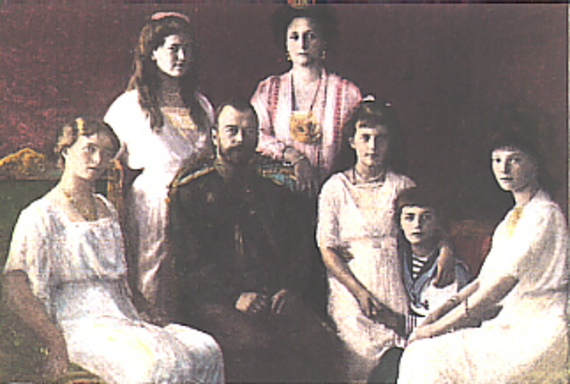 Tsar Nicholas II with Alexandria and Their Children

Ensconced in the royal palace in Petrograd, the newly renamed St. Petersburg, Tsar Nicholas II and his family were almost completely out of touch with ordinary Russians. Cocooned and isolated within the royal court, they were oblivious to the enormous cost being inflicted by the war. The couple had five children, four girls and a boy. The Tsarina Alexandra was extremely unpopular, loathed by many Russians because of her Germanic origins.

Tragically the heir to the throne, the Tsarevich Alexei, was a hemophiliac and was subject to uncontrollable internal bleeding after even the slightest fall or bruise. Desperate to find a means for dealing with her son's hemophilia, the Tsarina had fallen progressively under the malign influence of a purported holy man from Siberia. 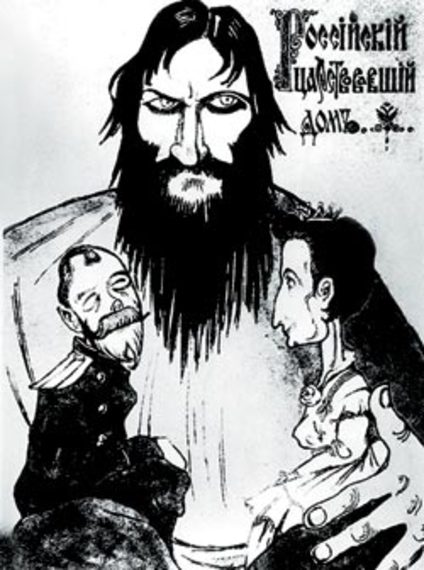 Grigori Rasputin has been variously described as a psychic, a mystic, and the "mad Siberian monk." What is certain is that he had a near hypnotic influence on the Tsarina and that he became a divisive figure in the royal household. He was able, through manipulation of the Tsarina, to influence government promotions and appointments as well as the policy of the war.

In late December of 1916, concerned by the damage wrought by Rasputin on the royal family, the Grand Duke Dmitri Pavlovich, a cousin of the Tsar, and Prince Felix Yusupov decided to murder him. Despite being fed cakes and wine laced with enough cyanide to kill five men and being shot, it is possible that Rasputin was still alive when the conspirators threw his body into the freezing Neva River in Petrograd. They were arrested, although never tried, but by then the damage to the reputation of the royal family had been done.

In late 1915, Nicholas dismissed his cousin and took over operational control of the army himself. With no military training or command experience, it was a role he was completely unfit for. The Tsar, moreover, seemed oblivious to the increasingly desperate economic situation.

At the start of the war, Russia's economy ranked the fifth largest in the world and its rate of growth was the highest in Europe. The onset of war had initially provided an additional growth spurt, but the economy soon began to steadily deteriorate. The combination of growing shortages of essential goods and successive military defeats were causing Russia's social fabric to begin to unravel. Within the next 12 months it would completely fall apart.