World War I in the Air: The Beginning of Air Combat 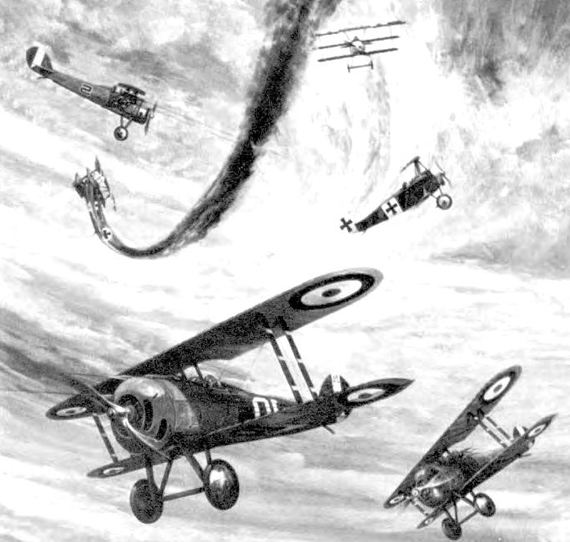 Air Combat on the Western Front

As each side became more belligerent, the pilots and observers began to arm themselves. At first only pistols and rifles were used. Grenades and even grappling hooks were also employed. Soon machine guns were deployed and the era of air combat began. The first aircraft brought down in "air combat" was an Austrian plane that was rammed by a Russian pilot in September 1914.

The main problem in air combat was how to fire straight ahead without chopping off your own wooden propeller. On April 1, 1915 the French aviator Roland Garros became the world's first air ace when he shot down the first of five German aircraft using a forward firing machine gun. His propeller was fitted with steel plates that deflected away the seven percent of the bullets that would otherwise have damaged it. The other ninety-three percent of the rounds got through to the target. 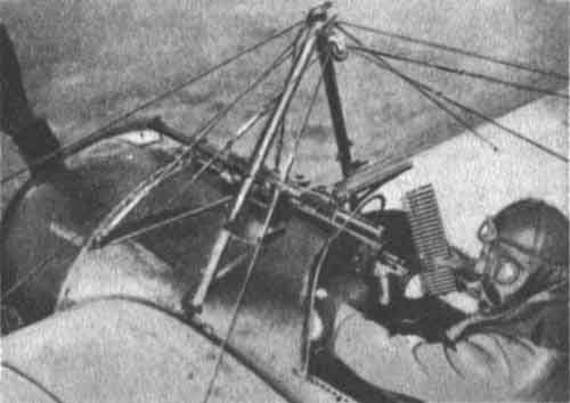 Shortly afterwards, while engaged in air combat, Garros's plane was damaged and was forced to land by the Germans. They quickly discovered this innovation. In response, they instructed the Dutch airplane designer Anton Fokker to develop an improved system. In an unbelievably short time Fokker developed the interrupter gear mechanism and he began building Fokker E1 Eindecker fighters for the Germans. The mechanism linked the propeller to the machine gun's trigger, which momentarily halted the stream of bullets as the propeller passed in front of the muzzle of the gun. Both sides quickly adopted this system. The British Vickers FB5 and the French Morane-Saulnier L were early examples of purpose-designed fighters. The era of the aerial dogfight had arrived.

It was this image of swopping, diving, machine-gunning aircraft that summed up the popular perception of air warfare during World War I. For the participants, the reality wasn't quite so adventurous; it was a matter of life and death. Without a parachute, if the airplane was set on fire or damaged, the pilot had only two options; stay in the plane and hope he could land it safely or take his chances and jump. Despite the technical advances in aircraft design and performance, fighter pilots were often being sent into battle with as little as 20 hours of flying time under their belts. In the Somme, pilots on both sides were undertaking the dangerous task of trench strafing; typically with no prior training and rarely any practice. As the war dragged on, both sides developed more robust defenses against aerial attack, and these missions became even more perilous. 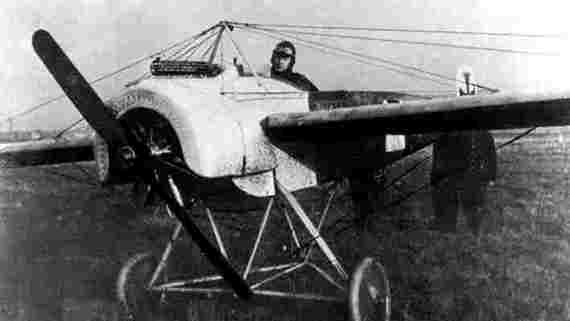 In July 1915, Germany overtook the Allies in air superiority by introducing the Fokker E I monoplane and initiating an era known as the Fokker Scourge. The Allies hit back with new machines, including the British FE2b and DH2 and the French Nieuport 11, and won back air superiority in time for the Battle of the Somme in July 1916.

Fed by a 47, or larger, 97-round drum magazine, the American designed, Lewis light machine gun was often provided as a weapon for the rear seat gunner in Britain's Royal Flying Corps machines. With a cyclic rate of fire between 500 and 600 rounds per minute, the gun was mounted on a scarff ring around the sides and back of his cockpit. This allowed the weapon to be rapidly trained on a target. The ring could be elevated so that the gunner didn't shoot off his own tail. 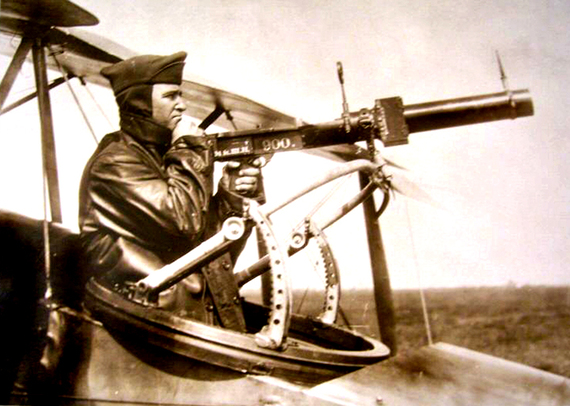 The use of the airplane in the ground attack role came early on in the war. Initially small, improvised bombs were used. As the war progressed and aircraft grew larger and more powerful, the weight of the bombs that could be carried also increased. Initially, bomb loads such as artillery shells and exploding steel darts were carried within the fuselage and dropped by hand. Later on, single-engine warplanes carried a number of 20-pound bombs stored on racks below the fuselage. The narrow trench lines and the nests of machine gun and anti-aircraft artillery made for a difficult target. Further behind the lines, however, enemy transports and troop concentrations provided easier pickings.

In late 1915 came the first flight of the Junkers J1 monoplane, an all-metal aircraft that showed the way forward for aviation technology. Shortly thereafter, the Allies introduced the Handley-Page HP O/400, the first two-engine bomber. This was a huge machine with a maximum takeoff weight of over 13,300 pounds. It could carry up to 2,000 pounds of bombs out to a range of 700 miles. Over 500 HP O/400s were built from December 1915 onwards. The individual weight of bombs had by now risen from 50 pounds to 500 pounds. In turn the Germans used their Gotha heavy bombers to replace their Zeppelins. In the last year of the war the Allies used heavy bombers in a tactical role to support the Argonne Offensive. During the campaign the "heavies" struck at German supply lines and troop concentrations.

With the development of an air combat capability plus the development of "heavy" bombers that could deliver a meaningful payload, the era of air warfare had finally arrived. In the process it would transform World War I into not just the first global war but also the first to be fought in three dimensions: on land, beneath the sea and in the clouds.