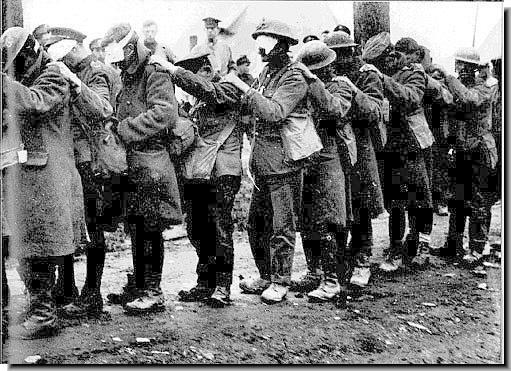 With the arrival of spring on the Western Front, German commanders began looking with interest at the Flemish town of Ypres in western Belgium, a site that had been successfully defended by the British the previous November. The Second Battle of Ypres was to become notorious for a sinister reason: it would see the first large-scale use of gas as a weapon of war on the Western Front. The age of weapons of mass destruction had begun. The Germans had already put it to use against the Russians in Poland. Another "first" came out of Ypres: it was the first time a force from the new world, the First Canadian Division, defeated a European power on the soil of the old continent.

Ypres consisted, in fact, of six major engagements, lasting from April 22 until May 25: the Battles of Gravenstafel, Saint Julien, Frezenberg and Hooge and two battles of Bellewaarde. Eight infantry divisions were employed on the Allied side; seven by the Germans. When the fighting ceased, the Allies had suffered 70,000 casualties, Germany half that number. 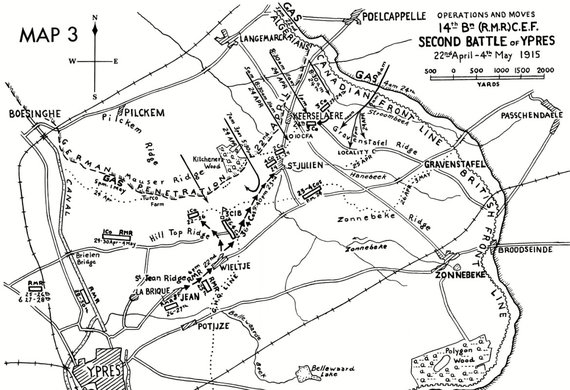 Allied Positions at the Second Battle of Ypres, April 1915

Germany began its efforts to take the town of Ypres with a two-day bombardment and then released 168 tons of chlorine gas over a four-mile front held by French, Moroccan and Algerian troops. German troops had hauled nearly 6,000 gas cylinders, each weighing 90 lbs., to the front by hand and had then opened them simultaneously, relying on the wind to carry the gas to its target. The capricious wind played tricks and many Germans were killed or incapacitated by their own weapon. On the French side, the number of casualties was terrible: around 6,000 troops died within ten minutes from asphyxiation or lung damage, and many more were blinded. The heavy gas filling the trenches also forced their inhabitants out into the open where they were easy prey for German guns. 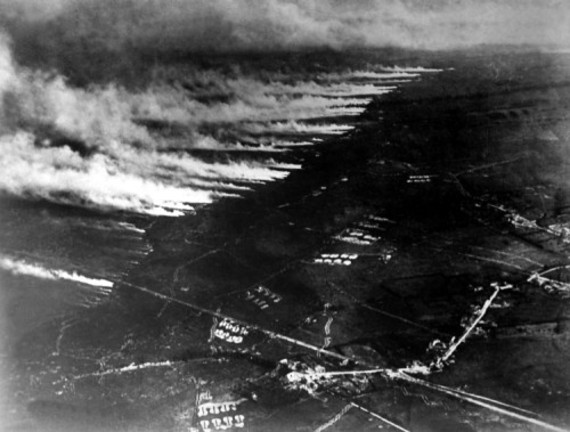 Beginning of German Gas Attack at the Second Battle of Ypres

One soldier described the effects of gas as "drowning on dry land." He continued, "the effects are these - a splitting headache and terrific thirst (to drink water is instant death), a knife edge of pain in the lungs and the coughing up of a greenish froth off the stomach and the lungs, ending finally in insensibility and death. The color of the skin from white turns a greenish black and yellow, the color protrudes and the eyes assume a glassy stare. It is a fiendish death to die. "

British Soldiers Being Gassed at the Second Battle of Ypres

The panic and abandonment of positions that ensued from the gas attack opened up a four-mile gap in the Allied front line. Not having anticipated such an opportunity, the German commanders lacked sufficient reserves to exploit the situation. The attempts they did make to pour through the gap were met by determined defense on the part of Canadian troops. Lacking gas masks they improvised by urinating on cloths and holding them to their faces.

Gas was used again in the battle for Ypres, but the Germans made no great advances. By May 25, the Ypres salient had been reduced so that the town was closer to the line. Eventually, it would be so damaged by shelling that hardly a building stood. By July 1915, Allied troops had been supplied with gas masks and anti-asphyxiation respirators affording them some measure of protection from subsequent attacks. 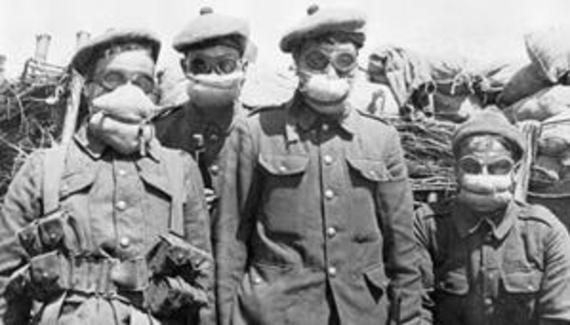 The spring of 1915 also saw the "shell crisis of 1915". Persistent newspaper reports of a shortage of artillery shells on the front lines, and its impact on the war effort, led to a political crisis in London. Asquith's Liberal government was held responsible for the shortages and blamed for poor planning.

Coming concurrently with the ongoing Gallipoli fiasco, the "crisis" sealed the fall of the Liberal government and led to a new governing coalition, in May 1915, with the Conservatives. This also proved to be the last time that a purely Liberal party government would rule in London. Lloyd George was appointed to the new cabinet post of Minister of Munitions with broad power to reorganize the production of munitions.

In reality, neither side had anticipated the rate at which artillery shells would be expended on the Western Front. At the start of the war, the role of artillery had been reassessed. Instead of using artillery in a tactical role to support infantry attacks, artillery was now seen as a strategic weapon to control the battlefield. Moreover, the static front lines made it easier to build rail links right to the artillery emplacements in order to quickly resupply them. The result was that generals could now call for massive, sustained artillery bombardments on a previously unimaginable scale. The resulting consumption of high explosive shells quickly out ran the manufacturing capacity of both sides.