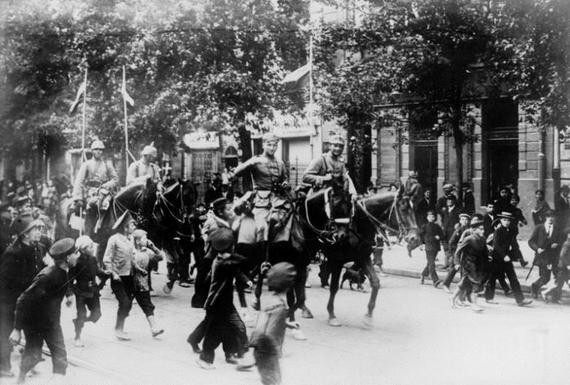 Notwithstanding its status as a global war, the main theater of operations in World War I was in Europe. It was on the battlefields of Europe that the war would be won or lost. The conflicts that raged in Africa, the Middle East, the Caucasus, China and the South Pacific, however deadly their consequences, were at best a side show.

The European Theater, in turn, was divided into three broad fronts: The Western front in France and Belgium, the Italian Front in northeastern Italy and the Eastern Front. The Italian front was a secondary theater in Europe. Potentially, the Italian front offered an invasion route, via the Lubjana/Gorizia gap, into the Austrian-Hungarian Empire. It tied down large numbers of Austrian-Hungarian troops, and, should the Russian armies in the East be able to breakout, it could, with a parallel Italian breakout, form the western end of a broad pincer movement that could surround and destroy the Austrian and German armies in the east. That would take a lot of "ifs", none of which came to pass.

The war on the Eastern Front began with the Austrian-Hungarian invasion of Serbia in July 1914. It would progressively grow to encompass a vast geography stretching from the Baltic Sea in the west to Minsk in the east, and from St. Petersburg in the north to the Balkans and the Black Sea in the south. This was a front of almost 1,000 miles. The absence of many natural defensive features and the relative low density of troops defending it, compared with the Western Front, created a far more fluid battlefield. Front lines were often broken, creating dramatic swings in the geography controlled by both sides. Trench warfare, the mainstay of the Western Front, was never developed to any great extent in the east. 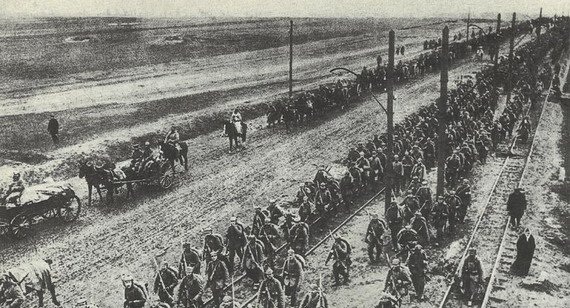 German and Austrian Troops Advancing During the Gorlice Tarnow Offensive

Unlike its progeny, World War II, the eastern front was not the decisive theater of the war. From the early days of the Franco-Russian alliance, the purpose of the military campaign in the east was to draw off enough German strength from the western front to prevent a decisive defeat of Anglo-French forces there. Initially, that strategy seemed to work. The surprising speed of Russian mobilization and the rapid advance of Russian troops into East Prussia forced the transfer of three entire Corps of German troops, some 75 thousand men, to the east. This redeployment was in addition to the 180,000 men originally intended, under the Schlieffen Plan, for the invasion of France, that were deployed in the east instead prior to the start of the war. The reduction in German forces in the west by some 250,000 men slowed down the timetable set out in the Schlieffen Plan and may well have cost Germany defeat at the First Battle of the Marne in September 1914.

With the western front stalemated and reduced to 200 miles of opposing trenches, the Eastern Front took on a new importance. It was the one front were both sides saw an opportunity for a decisive victory. More importantly, the outcome of the fighting on the eastern front would have a direct bearing on the number of additional troops that Germany could deploy on the western front and could represent the margin for a decisive victory in the west. That is precisely what would happen in the spring of 1918 when as a result of the Russian-German Treaty of Brest-Litovsk, Germany was able to transfer 33 divisions to the west. By then however, the buildup of the newly arrived American troops, blunted much of the new found German advantage. 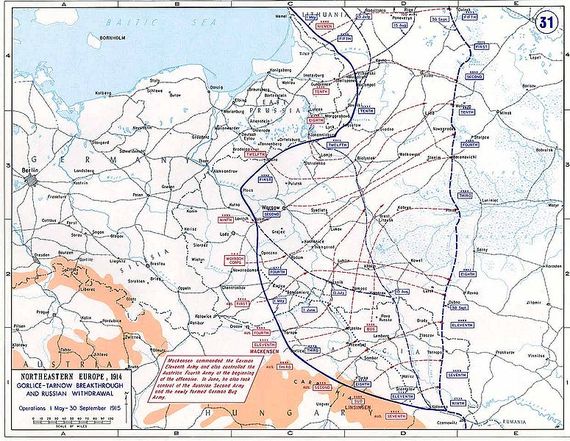 The Gorlice-Tarnow Offensive Stymied by the lack of progress in the west, the German General Staff decided to make the Eastern Front the main focus of their efforts in 1915. To eliminate the Russian threat into Central Europe, the Germans launched the successful Gorlice-Tarnow offensive in Galicia, in May 1915. The offensive began as a diversionary attack by German forces to relieve Russian pressure on Austrian-Hungarian troops in the Carpathian Mountains. Its initial success turned into a broader unified offensive that lasted from May through October 1915. It would result in the total collapse of the Russian lines and the retreat of Russian forces well into Russia.

In April 1915 the recently organized German 11th Army, consisting of ten infantry divisions under General August von Mackensen, was transferred from the Western Front. In conjunction with the Austrian-Hungarian 4th Army, consisting of eight infantry and one cavalry division under Archduke Joseph Ferdinand, it faced the Russian Third Army comprised of eighteen and a half infantry divisions and five and a half cavalry divisions, all under the command of Russian General D.R. Radko-Dmitriev.

Operating under the overall command of General Mackensen, the combined Austrian and German armies shattered the Russian defensive line. Over 140,000 soldiers of the Russian Third army were captured. Total casualties were unknown. Simultaneously, the Austrian 4th and 7th Armies launched a fresh offensive against the flanks of the Russian Eleventh army along the Dniester River. What was left of the Russian army was forced to withdraw back to the Russian border. All of the prior year's conquest of Galicia was given back, as was the recently captured Austrian fortress of Przemysl.

On August 4, 1915 German forces occupied Warsaw. In the following weeks, German troops would clear the rest of Russia's troops from Russian Poland. For the Poles, the Germans were hardly seen as liberators although they were still preferable to the former Russian occupiers; especially since the Russians had enforced a scorched earth policy as they had withdrawn eastward into Russia. The next year, in an effort to increase Polish support for the Central Powers and to raise a Polish Army to use against Russian troops, the German and Austrian-Hungarian governments announced that they would create a new Kingdom of Poland from a portion of recently conquered Russian Poland.

The course of the war on the eastern front would continue to ebb back and forth over the course of 1916 and 1917, until revolution in Russia and the collapse of Russian forces would bring the military conflict in the east to a final close.