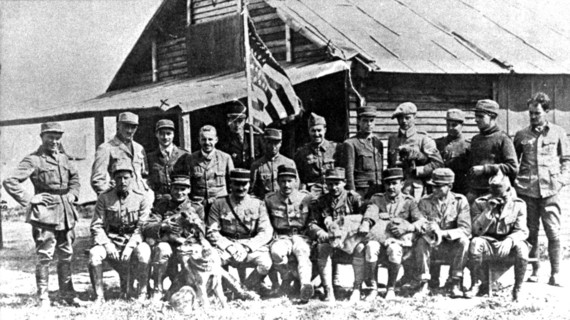 In 1916, following the French model, the German High Command reorganized their air forces into specialist bomber and fighter squadrons. By the beginning of the following year, aided by the deployment of aircraft such as the Fokker D I, D II and D III and the Albatros D I, the Germans had once again achieved air superiority over the Western Front.

In the meantime, although the United States was not yet in the war, many American volunteers were flying in Allied air squadrons. In March of that year, the French organized Squadron Number 123, called the Escadrille Américaine. The word Escadrille simply meant squadron. The Germans filed an official objection with the U.S. government over the name; claiming it suggested American support for the French war effort and was a violation of America's stated neutrality. In response to a request from Washington, in December the squadron was renamed the Lafayette Escadrille in honor of the Marquis de Lafayette--a hero of both the American and French revolutions.

The squadron had been the idea of Dr. Edmund L. Gros, medical director of the American Field Service (AFS), and Norman Prince. The AFS, which today conducts intercultural exchange programs around the world for young people, began as a volunteer ambulance service during World War I staffed mostly by expatriate Americans living in France.

Prince and Price hoped that the exploits of an American air unit fighting on behalf of the Allies would spur public support of the Allied cause in the United States and lead to a formal entry of the U.S. into World War I. The Escadrille Américaine, escadrille N. 124, was authorized by the French Air Department on March 21, 1916. It was deployed on April 20 in Luxruil-les-Bains, a small town in Burgundy in eastern France. By May, the squadron had been trained to combat level and it was soon in action over Verdun. On May 18, 1916, while over the Verdun battlefield, Kiffin Rockwell recorded the squadron's first aerial kill.

The squadron consisted of 28 American pilots, including Eugene Bullard, the first African-American fighter pilot. The escadrille's commander, Captain Georges Thenault, was French and so were the unit's mechanics, airplanes and ground support. There were an additional five French pilots that flew, at various times, with the squadron. Its members all wore French uniforms. The number of volunteer American pilots exceeded the capacity of the Lafayette Escadrille, so the French organized the Lafayette Flying Corp. In total, 265 Americans served in the Corp, including the members of the Lafayette Escadrille. There were a total of 209 American pilots that completed French flight training. Of these, 180 saw combat in the French Air Force. 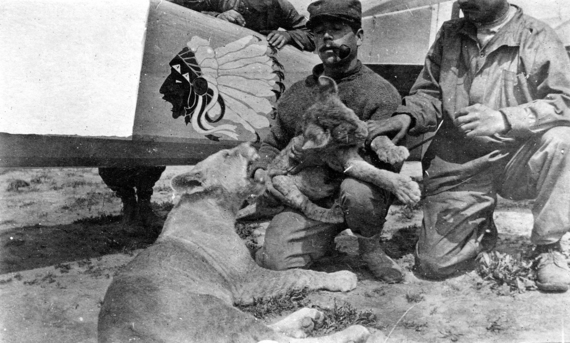 Whisky and Soda, the lion mascots of the Lafayette Escadrille

The members of the squadron, with their mixture of gaudy uniforms and their lion cub mascots named Whiskey and Soda, caught the public's imagination. The pilots were able to live and play behind the squalor of the trenches. Their frequent trips to the hot spots of Paris were tempered by the knowledge that the average life expectancy of a World War I fighter pilot was just over three weeks.

One pilot who beat the average before finally succumbing was Major Raoul Lufberry, an American citizen born in France. He was the Lafayette Escadrille's first and only ace and America's third highest scoring ace with 17 "kills." He served in both the French and U.S. air services. Lufberry was killed on May 19, 1918 when, during combat, he fell from his blazing Nieuport 28.

Following the entry of the United States into the war, the squadron was dispersed on February 8, 1918. The pilots were subsequently inducted into the U.S. Air Service. Most of the veteran pilots were assigned to training the newly arrived American airmen. Twelve of the pilots were inducted into the 103rd Aero Squadron. The name of the Lafayette Escadrille was subsequently changed to the Jeanne d'Arc (Joan of Arc) Escadrille and continued its participation in the war. The Escadrille SPA-124, the Jeanne d'Arc Escadrille, is still an operating squadron of the modern French Air Force.

The emergence of air power as a theater of conflict in World War I represented an unprecedented expansion of the battlefield into a third dimension. Not only was the conflict a world war that encompassed 90 percent of its inhabitants, but it was also a conflict that was fought out everywhere, on land and sea, beneath the waves and in the air.

Air power represented the cutting edge of industrial and technological innovation in the early twentieth century, and evolved rapidly following the first successful air flight of the Wright brothers. On the other hand, however intriguing and fascinating, it is hard to see how air power in itself was that crucial a factor in shaping the outcome of the war. Unlike the submarine or the tank, both also important technological innovations that emerged from the war and whose impact on the outcome of the war is far more apparent, we cannot point to any battles whose outcome was shaped by the role of air power. 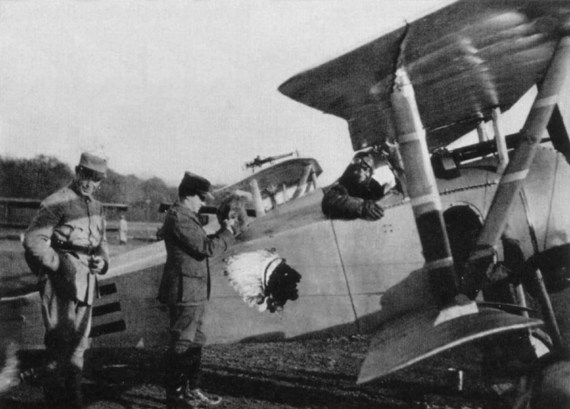 Major Raoul Lufberry in his Nieuport 17

Those daring young men and their flying machines may have captured the public's imagination, and they may have been a useful tool for reconnaissance and the ground support of troops, but in the end their impact in shaping both the conduct and the outcome of the war was muted.

Instead it would be fair to say that World War I was the crucible in which the weapon of air power was tested and refined. Many of the roles that would eventually be assumed by air power: air superiority, close ground support, strategic bombing and marine reconnaissance, first emerged during this war. So too did naval air power and the first aircraft carriers, and the role of air power in shaping war at sea. It would take another generation and another world war before the true power of this weapon would be unleashed and when it was, it would prove to be devastating.

By the end of the war, American Brigadier-General Billy Mitchell was able to declare with confidence, "The day has passed when armies on the ground or navies on the sea can be the arbiter of a nation's destiny in war. The main power of the defense and the power of initiative against an enemy has passed to the air."