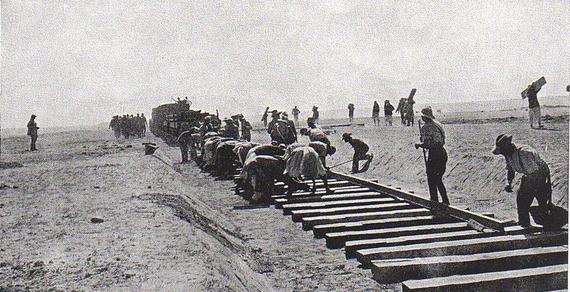 British troops constructing the railway line across the Sinai to Katia

During World War I, the Allies engaged Ottoman forces on three principal fronts: Gallipoli, the Caucasus and the Sinai Peninsula. The Gallipoli campaign in westernmost Anatolia was an attempt to seize the Turkish forts along "the narrows," the narrowest portion of the Dardanelles, in order to clear the minefields and open up the way for British and French naval units to sail up the Turkish Straits and besiege the Ottoman capital of Constantinople. The ground force was made up of a combination of British and French units, with the British contingent drawing heavily from Australian and New Zealand troops. The latter, dubbed the ANZACS, an abbreviation of Australian New Zealand Army Corps, would suffer enormous casualties during the roughly nine month long campaign. The effort ultimately failed and the Allied troops were withdrawn.

The Caucasus campaign saw Russian forces make slow but steady gains in eastern Anatolia. Harsh winters, the absence of roads and the rugged terrain made for slow progress. Nonetheless, Russian troops made significant advances and were on the verge of penetrating into northern Mesopotamia and central Anatolia before the Russian Revolution led to the collapse of Russian forces on the Caucasus Front. As a result of the Treaty of Brest-Litovsk, signed between the Bolshevik government in Moscow and the Central Powers, Russia, it was not yet the USSR, returned all of its Anatolian conquests, as well as territory seized in the earlier Russian-Turkish war of 1877.

It was the Sinai, a theater manned largely by British and Empire forces, which would prove to be the decisive theater in the Allied conflict with the Ottoman Empire. Between 1916 and 1918, British forces would successfully march up the eastern flank of the Mediterranean, reestablishing European control of Jerusalem for the first time since the eleventh century, and reaching all the way to Damascus before the Armistice of Mudros on October 31, 1918, brought an end to the hostilities. In the process, it would pave the way for the dissolution of the Ottoman Empire and its subsequent division between Great Britain and France.

The initial Allied strategy had been to simply knock the Ottoman Empire out of the war. The Gallipoli campaign was seen as the fastest way of doing that. When that campaign failed, an advance through the Sinai and Palestine was seen as the next best alternative. An Ottoman surrender would have opened up the Turkish Straits to Allied shipping, allowed the shipment of critical military supplies to the Russian Army and allowed Russia to deploy more troops on the Eastern Front. In turn, more Allied pressure in the East would force Germany to redeploy more troops there from the Western Front, relieving the pressure on Allied forces in France. It was on the Western Front, the Allies believed, that the ultimate outcome of the world war would be decided. 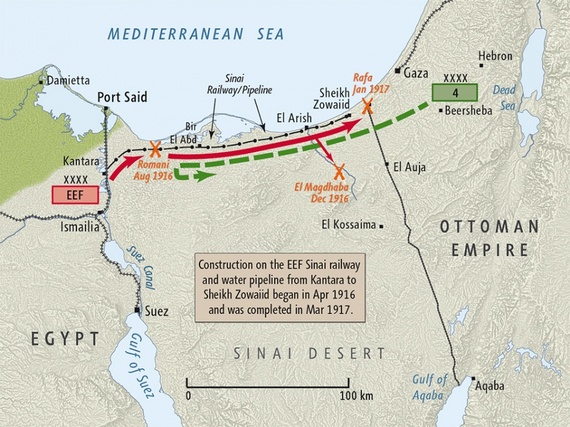 The strategy of the Ottoman Empire and their German allies was essentially the reverse. By threatening the Suez Canal and British control of Egypt, the Central Powers believed that Great Britain would be forced to deploy more troops in the Sinai. Every soldier deployed in Egypt was one less soldier available for deployment of the Western Front.

The Ottoman Minister for War, Enver Pasha, also believed, or at least hoped, the Ottoman successes against British forces would spark a revolt among Muslims in Britain's colonies. Such a revolt would tie down additional British forces, potentially lead to the loss of large areas of the British Empire, including India, and possibly pave the way for Ottoman seizure of the Turkic areas of Central Asia from Russian control. Initially, it was the Sinai where these two competing strategies would be played out.

By early 1916, the Ottoman forces in Gaza and the Sinai had been expanded and resupplied and were ready to try again to seize control of the Suez Canal. Following the Allied withdrawal from Gallipoli, both sides had redeployed some of these troops to the Sinai. The Ottoman force was reorganized into the Fourth Army of Syria and Palestine. Its six divisions, organized into the VIII Corps and XII Corps, numbered around 50,000 men. With the railroad line between Berlin and Constantinople now open, ammunition and equipment was reaching, the often times German led, Ottoman troops. The immediate objective was to seize control of the Suez Canal and deny its use to Great Britain and the Allies.

To counter the Turkish build up in the Sinai, the British organized the Egyptian Expeditionary Force. They also organized a mounted cavalry force consisting mostly of ANZAC troops redeployed from Gallipoli. In the spring of 1916, the British decided to move their defensive lines forward from the vulnerable canal and deeper into the Sinai. They also continued the extension of a rail line and water pipeline eastward in order to supply the forward positions of British forces. British horse and camel cavalry units were deployed to clear the central trail across Sinai. Approximately 60,000 troops of the Egyptian Expeditionary Force (EEF), under the command of General A. J. Murray, were stationed in forward positions in the Sinai and along the canal.

On April 23, 1916, Ottoman Forces, under the command of German General Kress von Kressenstein, attacked British forces in the town of Katia in the Sinai. The town was the projected terminus of the Sinai Railroad and its accompanying waterline. British forces stationed there were widely dispersed and proved no match for the attacking Ottoman force. After briefly occupying the town, and destroying anything deemed to be of military value, the Ottoman force withdrew eastward. 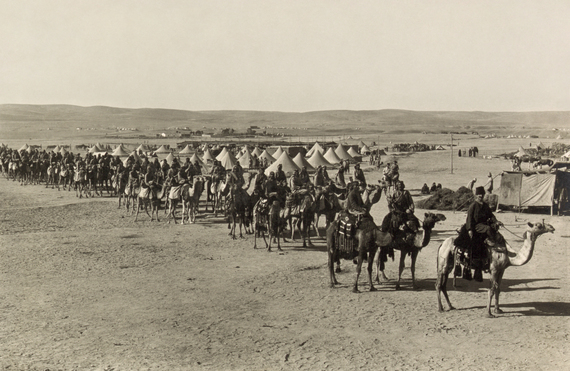 The Ottoman Camel Corps at Beersheba

A combined Turkish-German force again attacked the canal on August 3, 1916, before being repulsed at the Battle of Romani. This time, the EEF pursued the retreating Ottoman force eastward back toward Palestine; defeating it at the battle of Magdhaba in December 1916, and the Battle of Rafa in January 1917. These victories resulted in the recapture of substantial Egyptian territory in the Sinai, but were followed by two successive EEF defeats at the hands of the Ottoman forces in the First and Second Battle of Gaza, in March and April 1917, at the Egyptian-Ottoman frontier.