Paul von-Lettow-Vorbeck and the War in Africa 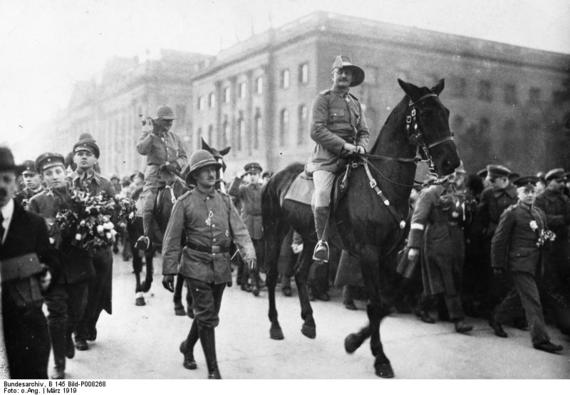 Among the most iconic characters to emerge from World War I was the German General Paul von Lettow-Vorbeck. As commander of German forces in German East Africa, he succeeded in holding off a combined British-Portuguese-Belgian Army of over 300,000 men with a force of less than 14,000 men, 3,000 of which were German soldiers and the balance comprised of German Colonial Army (Schutztruppe) troops. Never defeated in battle, he was the only German commander to successfully invade British colonial territory during World War I.

Before the onset of World War I, Germany had expressed broad ambitions to develop an African empire. By 1914, Germany controlled four principal colonies in Africa: German West Africa, Togoland, German East Africa and German Southwest Africa. Together, these colonies covered an area of approximately one million square miles and had a population of almost fifteen million people. 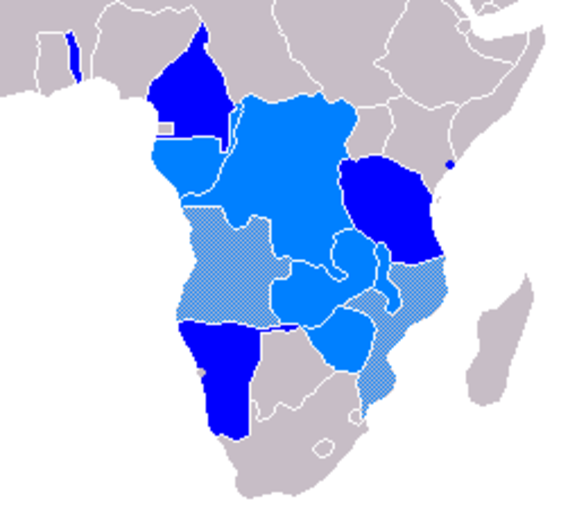 The expansion of Germany's African colonial empire figured prominently in Germany's postwar plans. Prior to 1914, the Mittleafrika lobby had advocated the annexation or the acquisition of both the Belgian Congo and the Portuguese colonies of Angola and Mozambique as well as the British colonies of Southern Rhodesia (Zimbabwe), Nyasaland (Malawi) and Northern Rhodesia (Zambia). Additional British and French territory would also have been acquired had Germany triumphed in the war. The result would have been the creation of a German colonial empire from the Guinea coast to the Indian Ocean covering one-third of the continent. 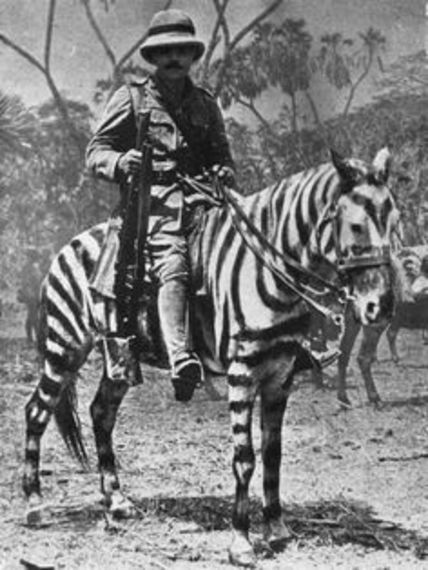 Instead, German colonies, mostly lightly defended, were subject to campaigns by armies of the British Empire, France, Belgium and Portugal. Germany's African empire, by the end of the war, was dismantled, with the victors dividing the spoils between them.

German colonial troops in the West African country of Togoland, nowadays Togo, and the Volta region of Ghana, surrendered to British and French forces very early in the war. In Kamerun, modern-day Cameroon, the fighting continued until 1916. Many German soldiers eventually escaped into the neutral territory of Spanish Guinea.

In their attempt to take German Southwest Africa, today's Namibia, the British committed the error of arming their former enemies, the Boers of South Africa. They paid the price when 12,000 Boers rebelled. Once the rebels had been vanquished, Boer General Jan Smuts advanced on the capital, Windhoek, and succeeded in capturing it in May 1915. South Africa was to remain effective ruler of southwest Africa for the next 75 years.

German and Portuguese forces clashed on the border between German Southwest Africa and Angola in March 1915. Despite their early success, the Germans surrendered in July. 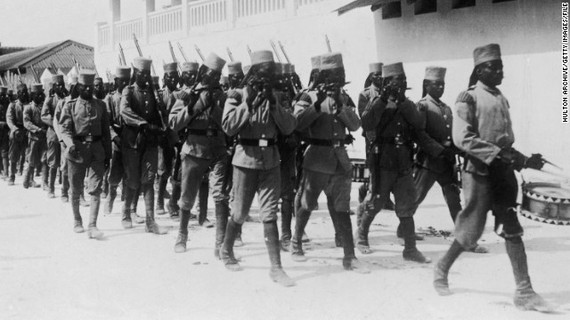 It was a different story in German East Africa, where the German colony comprised the modern-day states of Tanzania, Burundi and Rwanda. The colony comprised a territory of over 384,000 square miles, an area three times the size of modern Germany. Here, in a sustained, brilliant guerrilla campaign, a force of approximately 14,000 men, comprised of 11,000 African soldiers (Schutztruppe) and 3,000 German soldiers under the command of General Paul von Lettow-Vorbeck held the 300,000-strong, armies of Britain, Belgium and Portugal at bay for four years.

The Schutztruppe were comprised of locally recruited African troops under the command of volunteer German commissioned and non-commissioned officers. Referred to as Askaris, they were initially recruited from Sudanese mercenaries and later from members of the Wahehe and Angoni tribal groups in German East Africa.

When war broke out, Lettow-Vorbeck immediately went on the offensive, attacking a British outpost at Taveta on the British side of Kilimanjaro. The attack was followed by a series of deeper raids into Uganda and British East Africa. In the meantime, German forces abandoned Lake Victoria in the face of superior British naval forces.

In order to eliminate the threat to British colonies in East Africa and subdue Lettow-Vorbeck, in November 1914, the British launched a two pronged attack into German East Africa consisting of an amphibious landing at Tanga while a second British force descended from the west in a broad pincer movement designed to trap German forces while at the same time seizing control of both ends of the Usambara railway. Although badly outnumbered, Lettow-Vorbeck prevailed over both British forces.

Despite British success in gaining control of Lake Tanganyika, Lettow-Vorbeck and his troops continued to avoid British attempts to defeat them. In 1916, South African General J.C. Smuts was given overall command of the theater in German East Africa. He was in direct command of a mixed army of South Africans, Indian and local African troops amounting to more than 93,000 men.

He was supported by Belgian and Portuguese armies consisting of another 200,000 or so men consisting primarily of local African troops. At this point, Lettow-Vorbeck's combined troop strength numbered only 13,800. Smuts succeeded in gradually confining Lettow-Vorbeck's troops to the southern portion of German East Africa but was never able to engage him in open battle much less defeat him. 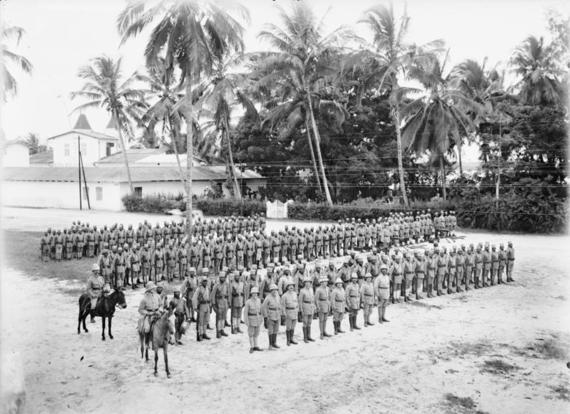 Eventually Lettow-Vorbeck withdrew into Portuguese Mozambique to raid supplies from the Portuguese military garrisons there. He returned to German East Africa in August 1918 and continued fighting until November 14th when he was handed a telegram informing him that an armistice had been signed on November 11th. He formally surrendered to British forces on 23rd November.

General Paul von Lettow-Vorbeck returned to Germany a national hero. On March 2, 1919, astride a black charger, he led a contingent of 120 officers and men of the Schutztruppe on a victory parade through the Brandenburg Gate. Although the campaign in German East Africa had little bearing on the overall outcome of the war, his military success would be remembered, in the words of the military historian Edwin Palmer Hoyt, as one of "the greatest single guerrilla operation in history and the most successful" 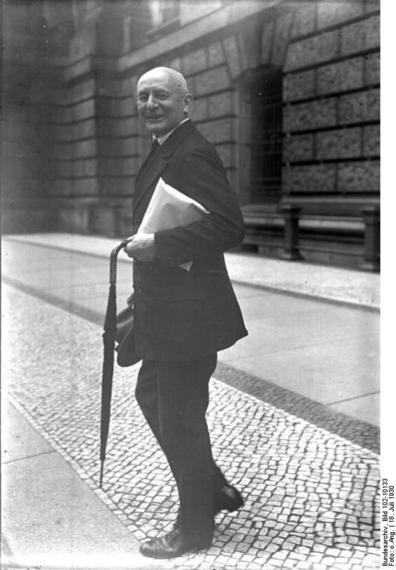 Lettow-Vorbeck would go on to serve in the German Reichstag from May 1928 through July 1930 as a deputy for the Monarchist German National People's Party. Intensely distrustful of Hitler and his Nazi party, he attempted to organize various parliamentary coalitions, the most notable being the Vorbeck-Blumenthal Pact, to keep the Nazis out of power. Wooed repeatedly by Hitler, legend has it that he told him off in no uncertain terms when in 1935 he was offered an appointment as the Ambassador to Great Britain.

Following his death in 1964, the West German Bundestag voted to give back-dated pay to all of the surviving Askaris who had fought with German military forces in East Africa. Only a few of the 350 odd soldiers still alive could present the discharge certificates that Lettow-Vorbeck had given them in 1918. The German official supervising the payments instead handed each of the Askaris a broom and asked them to perform the "manual of arms". Every man passed the test.

Mascots For Paris Olympics Criticized For Being Mostly Made In China