I'm in London and this week's tabloid Daily Express has a headline in type two inches high: "ORGANIC FOOD NO HEALTHIER." The article begins, "Eating organic food in the belief that it is good for your health is a waste of money, new research shows." 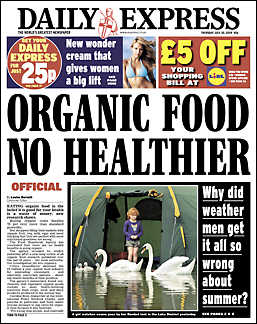 Really? This surprising statement is based on the conclusions of a lengthy report just released from the British Food Standards Agency, Comparison of composition (nutrients and other substances) of organically and conventionally produced foodstuffs: a systematic review of the available literature. This report, done by excellent researchers at the prestigious London School of Hygiene & Tropical Medicine, looked at the results of 162 studies comparing organic to conventionally grown foods for their content of nutrients and other substances. Although it found higher amounts of some nutrients in organic crops, it found higher amounts of others in conventional crops, and no difference in others. On this basis, the report concludes:

There is no good evidence that increased dietary intake, of the nutrients identified in this review to be present in larger amounts in organically than in conventionally produced crops and livestock products, would be of benefit to individuals consuming a normal varied diet, and it is therefore unlikely that these differences in nutrient content are relevant to consumer health.

In a statement accompanying release of the report, the Food Standards Agency says:

The Agency supports consumer choice and is neither pro nor anti organic food. We recognise that there are many reasons why people choose to eat organic, such as animal welfare or environmental concerns. The Agency will continue to give consumers accurate information about their food based on the best available scientific evidence.

I'm surprised that investigators of this caliber would focus so narrowly on nutrient content. There is no reason to think that organic foods would have fewer nutrients than industrially produced foods, and there are many reasons to think that organics have greater benefits for the environment, for pesticide reduction, and for taste, all of which affect human health at least as much -- or more -- than minor differences in nutritional content. I buy organics because I want foods to be produced more naturally, more humanely, and more sustainably. I see plenty of good reasons to buy organics and this study does not even begin to address them.

Fine, but do animal welfare and environmental concerns not matter? The authors of the report summarize their findings in a paper in the American Journal of Clinical Nutrition. The paper concludes:

On the basis of a systematic review of studies of satisfactory quality, there is no evidence of a difference in nutrient quality between organically and conventionally produced foodstuffs. The small differences in nutrient content detected are biologically plausible and mostly relate to differences in production methods.

But these authors did not compare amounts of antibiotics, hormones, pesticides, herbicides, chemical fertilizers, irradiation, genetic modification, or sewage sludge. They did not look at any of those things. They only looked at nutrients. This is an example of nutritionism in action: looking at foods as if their nutrient content is all that matters - not production methods, not effects on the environment, and not even taste.