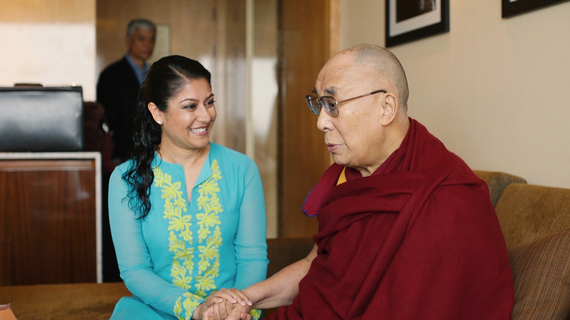 Today is World AIDS Day 2015. While the outlook for people living with HIV has never been better, many challenges persist throughout the world relating to HIV prevention and education. I'm acutely aware of these problems every time we launch a new version of our research-based HIV prevention software, as we are doing in February in the Tibetan language.

I began the work which became TeachAIDS in late 2005, and our team has been full-time since spinning out of Stanford in 2009. Over the years, we have all learned a great deal about scaling and running a nonprofit social venture. One of the most humbling and educational parts of our work has been getting to meet others working on social causes who have had a profound influence on the world.

There is no better example of such a person than His Holiness, the 14th Dalai Lama, Tenzin Gyatso, who has been a source of great inspiration to us and countless others. I was recently given the opportunity to meet His Holiness, to receive his guidance on pursuing social causes and service. His kindness, generosity, and humor gave me a renewed sense of purpose and focus. Here are some of his words on serving humanity; I hope they resonate with others, particularly everyone who has worked tirelessly to improve the human condition.

Serve the world, not just our individual groups.
The Dalai Lama said that we should serve all of humanity, not just our own individual sections of it. Local and regional causes necessarily have a smaller scope, but for global challenges, we should ask ourselves are we doing our best to help everyone we can? One of the defining characteristics of TeachAIDS has been that we are pursuing a transnational approach to HIV prevention education. Our software is simultaneously local -- in that every version is designed for a specific language and culture -- and global, in that we repeat this approach systematically for regions with the greatest HIV prevention needs. Nonetheless, we are constantly thinking about what else we can do to ensure that our materials have the widest possible distribution. We have had the software displayed in non-interactive form on national television stations, shown during halftime at World Cup soccer games, and played on laptops hooked up to car batteries by NGOs in villages without electricity. Unfortunately, there are also groups that are not reached by any of our channels, so we are working to bridge those gaps as well.

Help others for unselfish reasons.
The Dalai Lama said that every human activity comes from a particular motivation, but if that motivation is something selfish, then it's impossible to be open. It's liberating and empowering to be able to function in a fully transparent fashion. One of the areas in which I see this illustrated is in our decision to be a nonprofit organization and distribute our materials for free under a Creative Commons License. When we began TeachAIDS, one of the questions we would routinely get from governments and NGOs around the world, after they had heard our pitch, was "OK, this sounds great, but how much does it cost?" When we told them the software was free, it was a revelation to them. There are many social enterprises that attempt to balance the motive of making a profit with the goal of helping the world. Many of these organizations are doing great things, but striking that balance is always a challenge. We have found that, at least for HIV prevention software, transparency around the lack of a profit motive allows progress on a scale that would otherwise be impossible. For example, in India, in just a few years, we have launched versions of our software for more than half-a-billion people, which are now being actively and freely disseminated by governments and NGOs.

When anyone in the world suffers, we all suffer.
The Dalai Lama said that "we must recognize that the suffering of one person or one nation is the suffering of humanity." As I write this, I'm looking out the window, watching rain pour over Chennai. It's been ten years since the city has been buried in water this late after the monsoon had passed; locals are boating through the streets to reach their destinations. I spoke earlier with Desingh Raja, the manager of our animation team for the last five years. He told me that he had walked through two-and-a-half feet of water to reach our animation studio in Velachery to meet the team. I told him he would get sick and that he should go back home, but he ignored me, replying "no, we have to finish. This is for the children of India".

It's this kind of selflessness which amazes me about so many of the people working on TeachAIDS as well as other social causes. This World AIDS Day, I think about how much progress has been made in the fight against HIV over the years, thanks to people around the planet coming together with a common goal.

Many thanks to His Holiness the Dalai Lama for his guidance and words of encouragement. Here is a short video of the meeting: