The British Art Show, currently at Leeds Art Gallery and next in Edinburgh, Norwich and Southampton may help us understand why the art of these islands has lost touch with that which it should be helping society preserve (that is, the realm of the human). Instead of this, it has become a commercial apparatus filled with political correctness and political slogans.

I think the two main problems that this show has are, firstly, the fact that this type of art is often supposed to be exhibited in institutional environments where the educational programs are, I would say, the only way to secure government money. This means that the preferred works are those that clearly illustrate social phenomena and that can be explained in one sentence to a group of uneducated adults or children. This, of course, pushes the issue of artistry (and the intentionality of the artists) aside and turns the work of art into a slogan and a vehicle for confirming what we already know which is that the world is fucked. Secondly, the problem also lies in the content of that slogan which almost always coalesces around issues of "origin" or "heritage." This last issue is blatantly reactionary and, for that reason, deserves to be explored here. Let me be more clear. 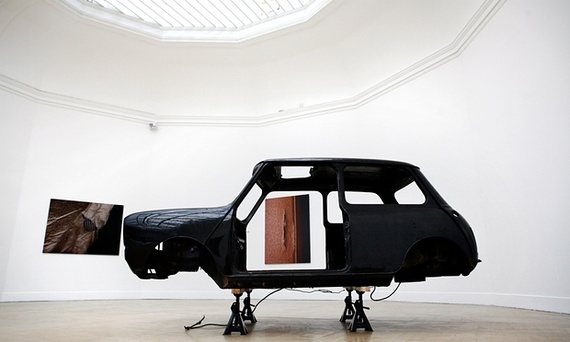 For the Leeds show the curators of British Art Show 8, Anna Colin and Lydia Yee, selected the work of 42 artists who, according to them, have made a significant contribution to contemporary art in the UK over the past five years. Among them, there is an artist that transforms worn-out shoes into art. There are also "sculptures" that double as donation boxes for the relief of student debt. There are working weaving machines, a pseudo-scientific contraption that supposedly imitates the enormous energy consumption of a bitcoin factory and Stuart Whipps, the artist showing the Mini -- linked to of the strikes that failed to deter Margaret Thatcher from transforming the landscape of this country forever. 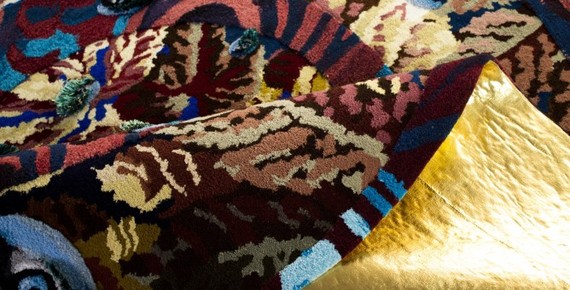 There is some craftily made art such as hangings stitched out of leather scraps that look uncannily like Paul Klee watercolours; outsize relief panels by that wildboy ceramicist Jesse Wine that play on the substance of Morandi's china vessels, as well as the texture of his still lifes.

On the other hand, much of the work centers on artificial intelligence, virtual reality and electronics. Lawrence Abu Hamdan's "A Convention of Tiny Movements" considers (and depicts, in wall-size photographs) all sorts of innocent objects, from tissues to crisp packets, which can be transformed into listening devices for surveillance. Melanie Gilligan's droll sequence of short films, The Common Sense, features a futuristic invention known as The Patch that can transmit emotions directly from person to person, resulting in some grotesque forms of barter and blackmail. And the Bitcoin "factory" in Yuri Pattison's installation, which apparently runs continuous calculations verifying online peer-to-peer payments, is streamed live into the gallery on a computer feed from China. Pattison wants to make the virtual processes real in our mind's eye; his film presents a place, his contraption proposes the metaphor of mining.

But what is the viewer supposed to do with these pieces? How should he or she react? According to the curators, they should be understood as an exploration of the ever blury line that separates the real from the virtual in our societies. According to The Guardian's Laura Cummings, we should avoid falling into the inherent lack of coherence of the show.  If you ask me, however, I would say that, overall, there is an emphasis on the  transformation of the materials with which the works are made into the source of artistic value. In other words, what makes Whipps' Mini a work of art is that the material witnessed a strike in 1979 that the work is supposed to evoque. The effort is in the 'genetics' of the work and not in the artistry. But how does that work? How can an object travel in time to transmit the energy of past (and unartistic) times. I don't think it would be too farfetched to compare this way of conceiving the material with the way relics used to function during the Middle Ages. Something similar happens with Broomberg and Chanarin's piece or Pattison's Bitcoin factory, both included in the show, which only become relevant because they include some sort of material that, at a point in time, was used in a meaningful way. It is as if meaning is, before we start, placed outside the work of art but in the past.  Why is this relevant and/or artistic? Because it allegorises financial globalisation which is to whom these artists (through their respective  gallerists) are actually desperate to sell? All this kind of art repeats the mechanics of a classist society in which someone has value for having been in this or that place or knowing this or that person. This is the point in which art becomes endogamic in the worst possible way.

Having said this, I think that this obsession with the genealogy of the materials (as in 'it is made with a car that witnessed certain historical events') brings about unconscious concerns about inheritance, property and the fear to lose what we are guilty to have.