After the fall of the Berlin Wall and the collapse of the Soviet Union, Francis Fukuyama famously declared an end to history. Things, of course, would continue to happen, he said, but the clash of rival ideologies was over with the "unabashed victory of economic and political liberalism."

It was 1992, and it was a time to celebrate. "What we may be witnessing is not just the end of the Cold War, or the passing of a particular period of postwar history, but the end of history as such: that is, the end point of mankind's ideological evolution and the universalization of Western liberal democracy as the final form of human government," he wrote in his landmark essay-turned-book.

With Germany and the eurozone squeezing the life out of Greece in a deal that forces the country to surrender to all of its creditors' demands, it has become clearer than ever that only one half of that victory remains alive: neoliberal economics.

Monday's deal between Greece and its creditors makes a mockery of the ruling Syriza government's democratic mandate for economic relief, which was reinforced by a July 5 referendum vote in which Greek voters rejected a deal that was far more moderate than the current one. The popularity of the hashtag #ThisIsACoup on Sunday expressed the view of many Greeks and citizens around the world that democracy had died in the negotiating room at the hands of Greece's creditors.

Within just a few years of Fukuyama's pronouncement, protesters in Western nations and governments and people in the global South began suggesting that the new democratic system was, in the end, perhaps not so democratic. The International Monetary Fund and other global creditors began writing laws, mostly for Third World countries, enforcing what they called "structural adjustment" -- which was bloodless bureaucratic language referring to the pillaging of a nation's assets and resources, coupled with the gutting of its social services, pensions and other advances that came in the 20th century. The first major protest to capture global attention was in Seattle, Washington, at a World Trade Organization meeting in 1999. The movement spread around the globe, with protests hitting capital after capital, wherever economic leaders gathered, until the attacks of September 11, 2001. A planned protest against the IMF and World Bank in Washington, D.C., was supplanted by a peace march.

This popular meme was among the tamer expressions of anger on the “We are all Greeks” Facebook page.

The world's rich nations assumed that what institutions like the IMF did in the South wouldn't hit the North. Capital, however, marched on. And on Sunday night, it marched into Athens with an offer to Greece that would end the idea that capitalism and democracy can survive together there. The final deal, released on Monday by the institutions of the European financial elite, states: "The [Greek] government needs to consult and agree with the institutions on all draft legislation in relevant areas with adequate time before submitting it for public consultation or to Parliament."

Not only would the Greek people be forced to accept the kind of deal they rejected overwhelmingly at the polls just a week earlier, but they'd be blocked from implementing any future policies Germany disapproved of.

"The triumph of the West, of the Western idea, is evident first of all in the total exhaustion of viable systematic alternatives to Western liberalism," Fukuyama wrote. But, instead, the absence of a viable alternative emboldened capital: with the threat of socialism gone, there is less need for either half of what's known in Europe as "social democracy."

The sad reality of #Greece & #Europe : Its not long now until historians draw a parallel with historical episodes of “gunboat diplomacy.”

In a previous interview with HuffPost, French economist Thomas Piketty highlighted the interaction. "The existence of a counter model was one of the reasons that a number of reforms or policies were accepted," he said, arguing that people in capitalist countries fared better thanks to the threat of communism. "In France, it's very striking to see that in 1920, the political majorities adopted steeply progressive taxation. Exactly the same people refused the income tax in 1914 with a 2 percent tax rate. And in between, the Bolshevik revolution made them feel, after all, that progressive taxation is not so dangerous as revolution."

During negotiations over the future of Greece, the Greek Syriza government repeatedly offered progressive taxation as a way of achieving some of the budget surpluses the institutions demanded. However, the institutions argued that higher taxes on the rich might slow growth and rejected the offer. With no fear of revolution, the interest in progressive taxation is gone.

The trending hashtag ThisIsACoup is exactly right. This goes beyond harsh into pure vindictiveness, complete destruction of national sovereignty, and no hope of relief. It is, presumably, meant to be an offer Greece can’t accept; but even so, it’s a grotesque betrayal of everything the European project was supposed to stand for.

On Monday morning, the details of the final deal forced on Greece confirmed skeptics’ worst fears. For the privilege of remaining in a currency union that has already devastated Greece’s economy, Greece must surrender what remains of its financial sovereignty. In exchange for rescue loans of 82-86 billion euros, the Greek government has been forced to agree to an even larger package of pension cuts and tax increases than those its citizens have already rejected.

But the most humiliating part of the agreement is a forced fire-sale privatization of Greece’s state-owned assets that will raise 50 billion euros. The sales will be ensured by strict eurozone monitoring. An apparent concession negotiated by French President François Hollande is that 12.5 billion euros of the returns from privatization -- one-quarter of the funds raised -- will be reinvested in the Greek economy.

And at the end of 2016, Greece will be required to beg the IMF for a new round of funding, something Greece has tried hard to avoid.

Greece did not receive significant debt restructuring, but will benefit from some longer payment periods and reduced interest rates. Much of the relief this would have offered was offset by the economic losses Greece has sustained from two weeks of capital controls that have closed its banks.

Ultimately, Germany’s willingness to force Greece out of the eurozone, and Greece’s unwillingness to risk the collapse of its banking system and the unknown economic consequences of a Grexit, have brought Greece to its knees. In the game of chicken between the two nations, Greece blinked first. German Finance Minister Wolfgang Schäuble -- long the creditors’ most powerful hardliner -- insisted until the end that Greece be temporarily forced out of the monetary union. That put Hollande and eurozone leaders in the position to play the good cop in negotiations: They pushed the parties to keep Greece in the eurozone, but on more onerous terms than ever before. 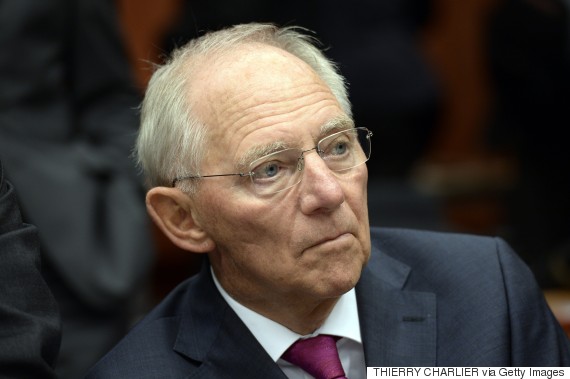 German Finance Minister Wolfgang Schäuble is seen prior to the start of the Eurogroup meeting scheduled in the EU Council building in Brussels on Monday. Schäuble's support for a temporary Grexit contribute to the pressure on Greece to submit to creditors' demands. (Thierry Charlier/AFP/Getty Images)

A Financial Times account of the marathon negotiations was replete with anecdotes of the browbeating that Greek Prime Minister Alexis Tsipras endured. Finance ministers from Finland and Slovenia took the opportunity to hector and shame Tsipras. A senior eurozone official reported, “They crucified Tsipras in there. Crucified.”

Indeed, the most decisive result of the final deal may be the collapse of Greece’s democratically elected government. Tsipras was able to push an earlier version of the deal, drafted with the help of French officials, through Greece’s Parliament on Friday night. Even then, Tsipras suffered a handful of defections from within his party, including Energy Minister Panagiotis Lafazanis, whom Tsipras will reportedly soon dismiss from his post. By Sunday, with the onerous terms of the new deal coming to light, senior Syriza members and legislators from their right-populist coalition partner, the Independent Greeks, were in open revolt. It is unclear whether Tsipras will be able to get the new deal through Parliament with his current coalition. 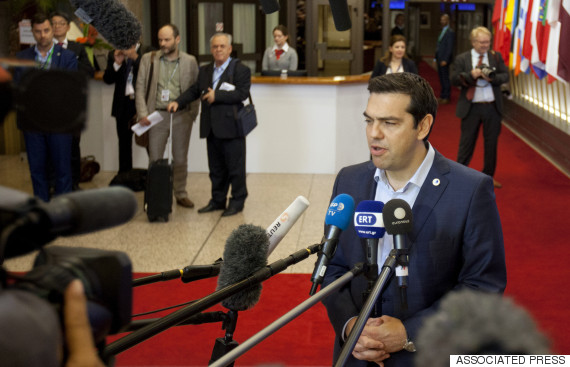 Greek Prime Minister Alexis Tsipras speaks with the media after a meeting of eurozone heads of state at the EU Council building in Brussels on Monday. Tsipras has agreed to a new bailout deal that accedes to virtually of the creditors' demands. One European official present in negotiations said that the other European leaders had "crucified" Tsipras. (AP Photo/Francois Walschaerts)

If Tsipras’ government does collapse, it will be by design. Even before Greece’s July 5 referendum, European leaders openly mused about their desire to force Syriza from power. They have decided to make an example of Greece to show that European citizens can elect governments with an anti-austerity agenda, but Germany and Europe’s wealthy countries will be able to dictate what those governments can actually do -- and whether they can stay in power.

The German government argues that the bailout deal is consistent with European ideals of democracy and sovereignty. But in a press briefing in Washington on Monday, Peter Wittig, the German ambassador to the United States, admitted that the broader sovereignty of the European Union sometimes contradicts the wishes of voters in individual eurozone nations. The “shared sovereignty” of the European Union “entails tensions,” Wittig said. “In some instances, this shared sovereignty conflicts with the wishes of some citizens.”

The United States has done precious little to support Greece or the principle of democracy in Europe. The Soviet Union may be gone, but the U.S. reluctance to intervene stems largely from its desire to keep Germany as a strong ally while the U.S. wages a proxy war against Russia in Ukraine.

If European history is any guide, the too-clever calculations and the petty vindictiveness will backfire in a bad way.

As Rena Dourou, a member of Syriza, wrote for HuffPost Greece on Sunday:

Greece is at a crossroads, between Europe, the Balkans, the Mediterranean Basin and the Middle East -- between the West and the East. It is at the junction of important geostrategic interests. It is situated in an area where the established interests of the great powers are pitted against those of rising regional powers, against the backdrop of a reemergence of blind religious fundamentalism, in the form of the Islamic State -- a serious menace to universal human rights and a threat to the principles and values of rationalism. The weakening of a country in this specific area and under these specific circumstances would constitute not just a failure, but a choice with grave strategic consequences.

Sign up to get an email when reporter Ryan Grim publishes a new story.