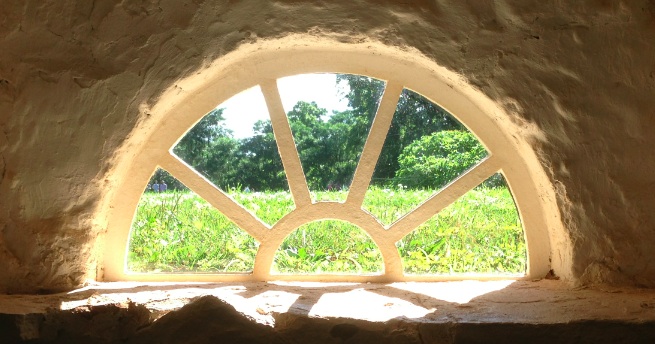 July 6 found us at Monticello, Thomas Jefferson's residential masterwork, located in Charlottesville, Virginia, on a day that was as much a progressive's pilgrimage as it was a family day of sight-seeing. We dodged sunlight and heat, finding respite and inspiration in the shade of massive, aged trees and shadowed cellar storerooms, going back and forth in time as we absorbed both the new and centuries-old, original aspects of the beautiful, high-cost folly that was our third president's dream home, the refuge he designed and had built for him atop the "little mountain" of his youth.

Our tour was one of the last ones of the day, the late afternoon sun bathing the mathematically formulated, classically inspired spaces in a warm glow that reflected the brilliance and eccentricities of our third President, the gentleman Revolutionary, the Renaissance Man. The soft light underscored the homage we were paying, adding a visual hush to the air that filled his rooms, in particular by the alcove bed upon which Jefferson breathed his last, on a July 4th in 1826, fifty years to the day after his Declaration of Independence was approved by the Continental Congress.

Thomas Jefferson's bed was built into a thick wall, linking two rooms that were his personal work and living space. To the East is his study, or cabinet, where, centrally placed by a writing-table, there resides a revolving bookstand, unique in that it is a finely wrought, wooden cube, faced with four small easels and a top surface upon which five open books can be displayed all at once and spun to quickly bring each set of pages into view, a research tool Jefferson had made around 1810. As any researcher will know, accessing multiple documents is foundational to one's work. Jefferson, with an oeuvre as majestic as his, had far too little time to be satisfied with stacks of books that would require the continuous flipping of pages, reshuffling and repeated re-stacking. The logic of the five-book revolving stand is as beautiful as is its workmanship.

I don't doubt for a moment that in addition to the five book array there would also have been additional volumes, heaped on the desk and marked, notated or at the very least split open to the pages he desired, their costly bindings stretched to accommodate their master's inquisitive needs. But Jefferson's use of the revolving book stand struck me as reminiscent of computer use today, the five open books spinning into view like docs layered on a screen. Today we tap a computer pad or click a mouse, pulling one source after another off the vast shelf we call the Web and placing onto our high-tech easels three, five, ten or more sources at once. Thomas Jefferson, as our nation's founding multi-doc manipulator, utilized what could be construed as the first tabbed browser. His walnut book stand we should consider the definitive precursor of our computer screen, the five spinning books the forerunners of our graphical user interface.

Unlocking with the turn of the spindle, book to book to book, Jefferson read, reread and located text as one might turn the dial of a safe to unlock and take from it the valuables inside, in this case knowledge borne of new conclusions, drawn from the words of ancients and rebel thinkers alike, perusing doc after doc on his rudimentary screen: Turn-click, turn-click....

I can easily imagine, even in his seventies, as most of the portraits in Monticello depict him, Jefferson today would have gloried in the World Wide Web, in its unfettered flow of information: the good, the bad, the sublime and the trash. And I bet this man of words who famously wrote, "I cannot live without books," who in his centuries was able to link the old with the new in ways we still regard with awe, would have been, like Steve Jobs, a proponent of skeuomorphism. Thomas Jefferson would no doubt have delighted in trying out my Mac and been eager to set up for himself a personal email address, illustrative and concise, in the same way he crafted his own epitaph, text bytes first carved into stone: