Can you imagine a black and white-robed Catholic monk walking the red carpet at the Oscars? A slim be-jeweled woman would approach him with a microphone, saying to the camera, "Why, it's Father Thomas Keating!" Then, turning to him, "Please tell us who designed your robe. And I love that twisted rope sash. It' so ... so ... Catholic!"

And on Monday morning TV, his attire would be described as "pure, classic, clean lines," words that actually describe Father Thomas Keating's lifestyle. All kidding aside, this might have happened.

There IS a film featuring this Catholic abbot: Thomas Keating, A Rising Tide of Silence. It was lovingly produced and directed by photographer Peter C. Jones, Keating's nephew. And Jones' film (his first) qualified as a nominee and made the first cut of documentaries vying for the Oscar finals. 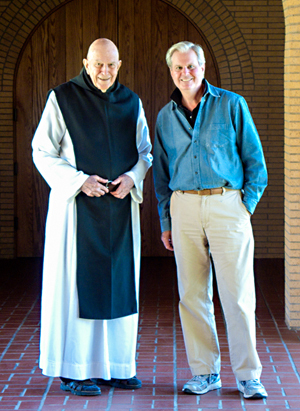 Jones, a New Yorker adjusting to L.A., says, We've been well received everywhere we've shown the film. And we'll go anywhere. When we were invited to the 2013 Aspen FilmFest, their large theater sold out. When the film concluded and people learned Father Thomas was in the audience, he got a three-minute ovation. And we won the Audience Award.

Father Keating's story, from age five to age 88, compelled me to watch the film twice. Though it is Jones' tribute to his uncle, he doesn't whitewash anything. Thomas hurts a good many people along the way, not the least being his family. Like any life, it isn't all pretty.

Fr. Thomas and Peter Jones/Photo by Charlotte Frieze
As a young man from a close-knit, privileged New York family, he chose to leave, for good, all he'd ever known and loved. For what? For the silent, uncomfortable, friendless life of a monk--cloistered, watched, and disciplined according to unchanging tradition.

Taking his camera inside shrouded monasteries, Jones interviews monks who had lived and prayed alongside Keating. I had to wonder what could compel a person to make such a dismal choice. Looking back in time to answer that, Thomas says, "All I wanted was just to talk to God." 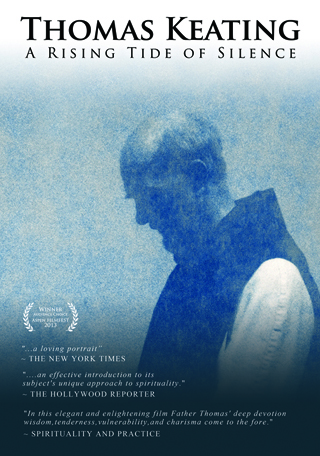 He tells his own story:

At five, I had a serious illness. I heard adults in the next room wondering whether I'd live. I took this very seriously, and at my first Mass bargained with God: 'If you'll let me live to 21, I'll become a priest'. After that, I'd skip out early in the morning before school and go to Mass. I knew my parents wouldn't approve, so I never told them.

Later, I went to Yale and made all D's the first semester. I wasn't studying! I'd read Tolstoy, who challenged Christianity, accusing it of mistakes. So I researched mistakes in the history of the church. It was a matter of life and death for me!

I looked around the Yale Library for a book and found, by happy chance, a four-volume set of homilies by church fathers from Christianity's earliest centuries. They verified what I'd perceived Christianity to be about yet was not being followed in our tradition.

I finally cut out all movies, radio, operas, dating. I had something to do that was much more interesting. I just wanted to talk about God. I remember coming out of a chapel at Yale after kneeling for an hour. I sat on a curb and said, "I wish I could just die!

I didn't want to go anywhere or experience anything else. It's like reaching the end of a journey. That was the moment I really changed completely and my values became completely opposite to those of my beleaguered father.

His father, Cletus Keating, was a successful maritime lawyer in New York City. Upon hearing they were losing their son for good, he, his wife and remaining children, Cletus, Jr., Anne and Marshall, were devastated. All but Thomas stayed put in the city. (Anne was Director Jones' mother and Marshall is my brother-in-law.)

I broke communication with everyone I knew, went into a Trappist monastery and prayed for my family daily. I felt the more austere the life, the sooner I would achieve the contemplative life I sought. I spent the next five to six years observing almost total silence. I couldn't leave. My only communication was with two abbots, neither of whom could give you any friendship or equality.

Keating's grandmother wrote him from her sick bed:

I miss you so much. I'm lying here in bed, and I said to the nurse, 'If my grandson doesn't come home, won't you please just throw me out the window?'

Unable to respond, Thomas prayed harder for those he'd left behind.

Rewarding his diligence, superiors made him Abbot of a second monastery. But some monks departed, complaining about his overarching strictness. Undisturbed, church fathers elevated him with the title of Abbot for Life in a third monastery, St. Joseph's, in Spencer, MA.

With more responsibility and travel, Thomas oversaw all Trappist monasteries in North and South America. He wrote, met and mingled with leaders of the world's great religions, and was frequently asked to speak. His lanky frame, the twinkle in his kind eyes, won favor everywhere he went. 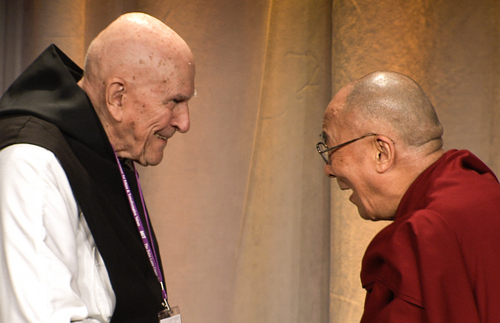 We see him sharing the stage with the Dalai Lama, with philosopher Ken Wilbur, meeting with groups of Muslim Imams and Jewish Rabbis. Some commented about him:

He's had a tremendous influence, maybe more than any Christian, on world religious dialogue. (a Muslim Imam)

He's a transformative figure, more than most people recognize, certainly more than the church recognizes. (a Jewish Rabbi.) 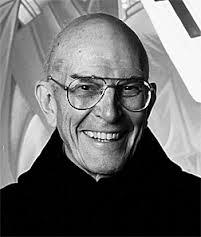 Yes, he transformed, becoming more ecumenical, more universal. He sees God in the Big Bang, in quantum physics, in Jungian psychology. He sees Eastern meditation as congruent with his Centering Prayer, both leading to union with the Divine. He wanted other Catholic monks to see the bigger picture, too.

"But Father Thomas' ideas deeply divided his monastery," says Jones. "Finally, he had a dream in which he was hanging wallpaper but it wouldn't stick. He recognized this represented his futility, so he asked for a straw vote. When it came in divided 50-50, he resigned almost immediately, leaving the monastery and his position. He said he didn't want to be disruptive. He retired to a Snowmass, Colorado, mountain house loaned by friends. He loves it up there."

"I live with eagles who also like solitude," the monk has said. But his life is not silent now. He founded a monastery in Snowmass, St. Benedict's, that's become a hub for world religious meetings, classes, and outreach programs to many states. Check the calendar at www.contemplativeoutreach.org 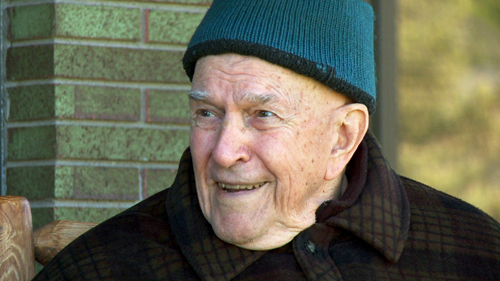 The day after watching this film, I decided to wear three layers to keep warm indoors. Starting with a thin undergarment, I added my usual white cotton turtleneck (I have nine). The third layer was a navy lightweight wool turtleneck. Something told me to pull the white turtleneck's collar out over that of the navy blue one. I'd never done that, but I liked the look ... pure, classic, clean lines. Strangely, I wore that for the next seven days. What was this priestly effect Father Thomas had had on me? Hmm ...

Thomas Keating: A Rising Tide of Silence will be introduced as streaming video within two months.
For DVDs and those with Spanish or Portuguese subtitles, go to www.contemplativeoutreach.org/product/thomas-keating-rising-tide-silence