Current Gig: After opening one of San Francisco's most popular pasta and pizza spots, Flour + Water, McNaughton developed a masochistic schedule, opening Central Kitchen and Salumeria and beginning a four-season cookbook, all in the same year. And it seems the schedule hasn't dulled the blade: 7x7 magazine has already called Central Kitchen "the new cuisine of the Bay Area." And just try getting a reservation after 5:30.

Now, McNaughton runs the block at 20th and Harrison, with three businesses, a test kitchen and an army of followers. This week, the young chef will step out of the kitchen to rub elbows with diners at SF Chefs, San Francisco's largest food event. HuffPost SF sat down with McNaughton to talk the event, his future and why food TV isn't what cooking is all about.

(SCROLL DOWN FOR RECIPE)

So Central Kitchen, Salumeria and a cookbook all at the same time. Sounds like a big year. It hasn't been dull.

Are you just going to keep expanding? No. NO. [Laughs.]

What made you decide to do all of this at once? After Flour + Water we always had the salumeria in mind, but it was actually the physical space here that dictated the other pieces of the puzzle. [Salumeria and Central Kitchen are housed within the same building.] I come from a more refined dining background so I always wanted something slightly more elevated than Flour + Water. Thus, Central Kitchen.

Tell me about your background. Are you from San Francisco? I'm from South Jersey. I've worked in Europe, but I left cooking school to work for Roland Passot at La Folie. I was only planning on staying here a year. That was in 2002.

Would you say that being here has influenced your cooking? Definitely. I've formed relationships with producers, farmers and the culinary community that are very important to me. It's not just picking up a phone and the food shows up. A lot of our food is raised specifically for us. It's pretty unique to be able to sustain yourself on that system year-round. That would be impossible in some place like South Jersey or New York.

Which local chefs inspire you? David Kinch, Daniel Patterson, and then the whole wave of their proteges who are doing their own thing.

Tell me a local restaurant you've been wanting to try. Atelier Crenn. I keep telling her [Chef Dominique Crenn] that I'm coming in but I haven't had a day off since we opened. A favorite place that I haven't been to in a while is Bar Tartine. I'm really excited about their new sandwich shop.

What do you love to do besides cooking? I get outside. I love foraging, exploring, being in the outdoors. As a chef, you're spending 14-16 hours a day inside, so it's nice to actually be in nature. I don't get to do that very often, but at home I have a deck space that doesn't have anything above it so even though it's in the Mission, it feels removed.

You have a lot of irons in the fire with all of your projects. Do you think it will ever get to a point when you aren't actually cooking anymore? It's sad how little I cook now. There's so much more that goes into running a restaurant than cooking. I'm going out to the farms to see the product, ordering deliveries and making sure they come in ok, developing dishes. It's a lot.

Do you think you'll ever go the TV route? That's a good question. When we first started getting attention, all of these TV producers started calling. But after opening these restaurants I can now say for certain that that is not something I want to do. All of that competition is kind of sad. Pitting people against each other, putting personalities up on a stage like that. That's not what cooking is about.

So what would be the end goal? I'd eventually love open a place up north and raise everything we serve in the restaurant. We have so many great resources in the city, but with the lack of space, that kind of vertical integration isn't really possible. I'm very passionate about farming and animal husbandry.

I hear you have a pet pig at your apartment. Kona. She's becoming quite the media whore.

Why a pig? I know it's a little weird. I don't really have a lifestyle that allows for a dog. But pigs are much more low maintenance. Except when I come home. Then she's like a needy girlfriend.

Do you have a girlfriend? The only girl in my life is Kona.

Try your hand at a McNaughton-style meal with the Central Kitchen recipe below: 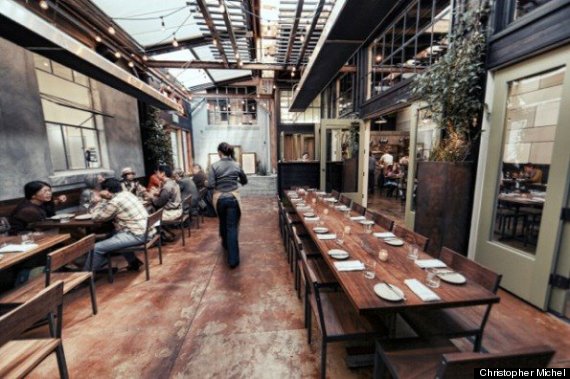 Fresh curds
1000 g. milk
400 g. buttermilk
salt to taste.
Procedure: Slowly warm the milk and buttermilk together until they separate. Strain the curds and whey. Reserve the whey for the sauce.

Whey Sauce
250 ml whey
1/2 pound butter
Procedure: Slowly reduce the whey until thick and almost set. It will almost be the consistency of a syrup. Emulsify the butter into the whey as if you were making a beurr blanc. Strain and keep in a warm area.

Arugula Sauce
170 g. arugula
200 ml. cold ice water
.01% xanthan gum
salt to taste
Procedure: Blanch arugula in salted boiling water. Cook for ten seconds or until tender and shock in a ice bath. Once cold blend in a Vitamix blender with ice water until smooth. Weigh the sauce on a digital scale and incorporate .01% of the total weight with xantham gum. Season with salt and lemon juice at the last minute. Serve at room temperature.

Poached Chicken
2 chicken breast skin on
50 grams butter
50 grams chicken jus (reduced)
1 sprig thyme
1 garlic clove
150 ml milk
1 T salt
Procedure: Place chicken in a cryovac bag with all ingredients. They should all be cold except the chicken, which should be at room temperature. Seal the bag on a medium setting and place into a water bath. Cook at 54 C for two hours and twenty minuets. Remove the chicken from the bag slice and serve.

Fork crushed turnips
1 bunch of baby turnips cleaned
1 quart water
2 T sugar
2 T salt
2 T butter
3 T banyuls vinegar
1 sprig thyme
2 clove garlic
Procedure: Place all ingredients in a pot and cook at a low temperature until the turnips are tender. Allow to cool in the liquid. Strain the liquid and reserve for another application.