On the surface, the "Thor" movies should be my least favorite of the Marvel Studio films. I never read “Thor” comic books as child, and the whole concept of watching a Norse almost-god prance around and do almost-godlike things with his magic hammer seems off-putting to me, to be honest. My instinct is to hate him.

But I don't! And that's because Marvel made the conscious or unconscious decision to model its theatrical version of Thor after Michael J. Dundee.

If you have never seen “Crocodile Dundee,” the plot centers on a somewhat cocky Australian outdoorsman named Michael J. “Crocodile” Dundee (Paul Hogan). He received his nickname from an encounter with a crocodile that has been exaggerated so many times that a reporter from New York City, Sue (Linda Kozlowski), is sent to Australia to do a story on what turns out to be little more than a flesh wound. And when we first meet Dundee, he’s a bit of a braggart – holding court in a seedy bar to anyone who will listen. And getting in fights. Regardless, Sue winds up finding Dundee a fascinating case study and brings him back with her to New York City. This is where people fall in love with the cocky outdoorsman … as a cocky outdoorsman who has no clue how to live in New York City. We found a way to connect with Mick Dundee because we’ve all felt out of place at some point in our lives.

When we fist meet Thor in his first self-titled film, he’s every bit as brash and cocky as Mick Dundee, and, yes, he also likes to get in fights – eventually waging a war against the Frost Giants, which went against his father Odin’s direct order. Thor is not someone we like right off the bat. In fact, Thor seems like kind of an asshole. Unlike Mick Dundee, Thor is sent away (in this case, to New Mexico) against his will as punishment for defying Odin’s order – along with being made mortal. It’s at this point that we start to like Thor.

Once both Mick Dundee and Thor are in their respective fish-out-of-water scenarios, the similarities are aplenty (I will even refrain from mentioning that both Chris Hemsworth and Paul Hogan are Australian or that Chris Hemsworth bought Paul Hogan's old house.):

Mick Dundee rides a police horse in Manhattan; Thor tries to buy a horse at a pet store.

Both Thor and Mick Dundee fall in love with a woman from the strange place they are respectively visiting. 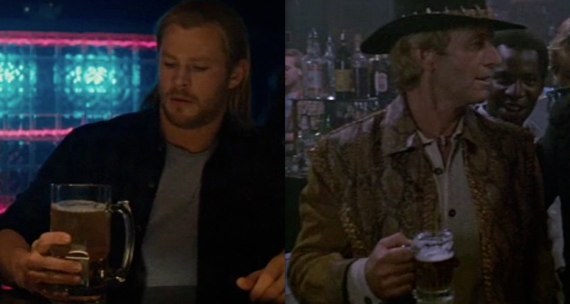 Both Thor and Mick Dundee aren’t afraid to wear outfits that show off their upper arms. 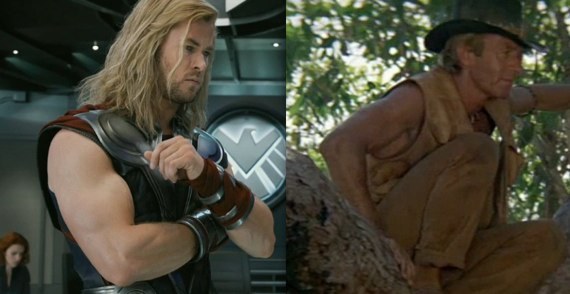 
(Mick Dundee also takes a man’s vial of cocaine and dumps it in boiling water, thinking he’s helping the man’s sinuses. It’s unknown if Thor was ever offered cocaine.)

In each film's sequel – “Crocodile Dundee II” and this weekend’s “Thor: The Dark World” – the scenario is basically reversed. In “Dundee II,” (in what turned out to be a terrible plot choice), Sue is kidnapped by a drug cartel that eventually leads Mick and Sue back to Australia where a final confrontation ensues between Mick and the cartel. (Though “Crocodile Dundee II” made a considerable amount at the box office, it’s certainly not a loved movie by any measurement. The sequel basically took the “National Lampoon’s European Vacation” route and decided that what was missing from the first, beloved, movie were criminals and a harebrained kidnapping plot.)

In their respective native homes, neither Mick Dundee nor Thor are terribly interesting to watch. They are just good at what they do in these environments that most of us are not familiar with. It’s when they travel to a place that is foreign to each of them –- this is when the characters grow and this is why it works. And, look, I get the appeal of having an adventure in Asgard because, hey, a whole new world to look at! But, Thor is at his most interesting when he’s right here on our little planet. And, yes, Mick Dundee is at his most interesting when he’s trying to figure out how a bidet works while he’s visiting New York City.

Marvel President Kevin Fiege has stated that they already have a story idea for a third “Thor” movie. Let’s just hope the title doesn’t wind up being “Thor in Los Angeles.”