Last week was but one more setback in hopes for a robust economic recovery. For two years now, economists, pundits and politicians have been looking for evidence that we have put the economic collapse behind us. Yet just last week, the sharp decline in the Case-Shiller Home Price Index and poor jobs report pointed to a stalling in any meaningful economic recovery.

The Case-Shiller index history, shown below, illustrates the extent of the asset bubble in residential real estate that we experienced over the past decade, and how far prices still have to fall to be within historical ranges. 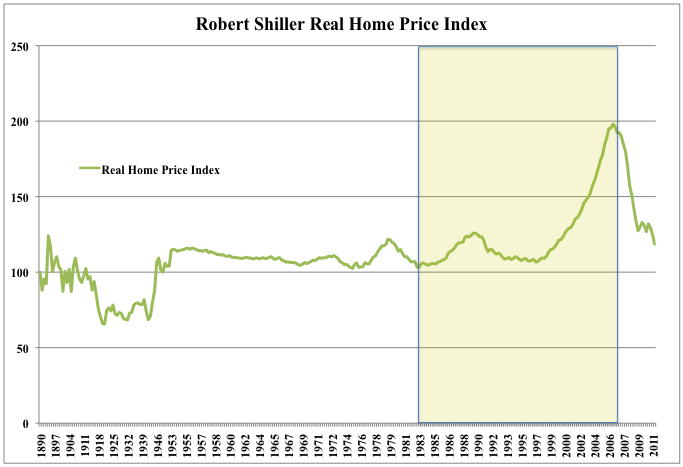 Even with the sharp contraction in prices that we have realized since the unraveling of the mortgage bond market almost three years ago, housing prices remain high by historical standards, and thus it is curious that this week Standard & Poor's would express puzzlement at the lack of a sustainable recovery. Its report "Global Housing Still Faces a Puzzling Future," begins: "Since the first-time homebuyer tax credit ended last year, the recovery of the U.S. housing market has been something of a tease." Unfortunately, that S&P should be puzzled is itself more of a puzzle than the housing market.

In fact, with the expiration of the first-time homebuyer tax credit and looming end to the quantitative easing efforts by the Federal Reserve to hold down long-term interest rates, the housing market is only now being left to face the brunt of post-crisis market forces without those two forms of federal support. As that support falls away, it is hard to be optimistic about the direction of the housing market, and if a rebound in housing is a prerequisite for a sustained economic recovery, we could have a hard road ahead.

In their write-up, S&P projects that when all is said and done, home prices will fall 35% from their pre-crisis peak, meaning that we have another 15% downside to go. Yet by historical standards, this will not produce "cheap" prices as S&P suggests, but rather return prices to within historical norms. But whatever bottom is ultimately reached in housing prices, a resurgent housing market will also require an environment that provides reasonable expectations for asset price stability, if not appreciation. And this appears unlikely to happen any time soon.

Over the past 30 years, the housing sector benefitted from declining interest rates and liberalizing standards for residential real estate lending. Just 30 years ago, my wife and I purchased our first house in Philadelphia. A 2,400 square foot twin, we purchased it for $37,000. 30-year mortgage rates at the time were 19% the day our offer was accepted. We were required to put down 20% and the result was a monthly payment just under $500.

Real estate is a peculiar market. While people talk mostly about the sale price, what matters most to the buyer is the monthly carrying cost of the mortgage, as well as the down payment. That is to say that affordability is only partially related to the sale price.

This was evident in the growth in property values in that Philadelphia neighborhood over the ensuing three decades. Since that day when we purchased our first home, long-term mortgage rates have declined fairly steadily. There were bumps and plateaus along the way, but the decline in mortgage rates led to a long-term, explosive uptick in home prices.

Five years after we purchased our home, with mortgage rates down to 10%, we sold it for $86,000. While the price was well over twice what we paid for it, the new owner's monthly payment of $600 was only slightly more than our $500 in real terms (adjusted for inflation). And the value of the homes on our block continued to increase as long-term rates continued downward. Over the ensuing years, as mortgage rates fell to 8%, the selling price of twins on that street increased to over three times their value in 1982. And by the time we reached the pre-crash years, and mortgage rates fell to the 6% range, the price of those homes topped out over $220,000, or six times what we paid, yet the monthly carrying cost of required to by a home at that price was only $1,200 per month, still almost the same as our $50o per month payment in 1982, adjusted for inflation over the ensuing quarter century.

As mortgage interest rates continued to decline from their 1982 peak, the market grew a fevered pitch. As a real estate broker said to my wife and I when we moved to California in 1990, "You just have to get on the escalator." Prices would go up, they would never go down. Americans borrowed more as rates declined, and, believing that prices could only go up, they committed more of their income to buying bigger homes: From 1982 to 2007, the median size of a new American home grew by approximately 50% and the percentage of household disposable income Americans spent on mortgages increased by 30%.

This was the phenomenon we lived through. As interest rates fell, lower cost mortgages allowed home values to skyrocket, even as homes remained affordable at the higher prices. The graphic below illustrates the trends that conspired to support the price escalation captured in the Case-Shiller Home Price Index (shown here as the green solid line). As mortgage rates fell (blue dashed line plotted against the right axis), the mortgage value that could be supported for a constant payment grew (solid red line, left axis), while at the same time the percent of household income families used to pay their mortgages increased (purple dotted line, right axis). 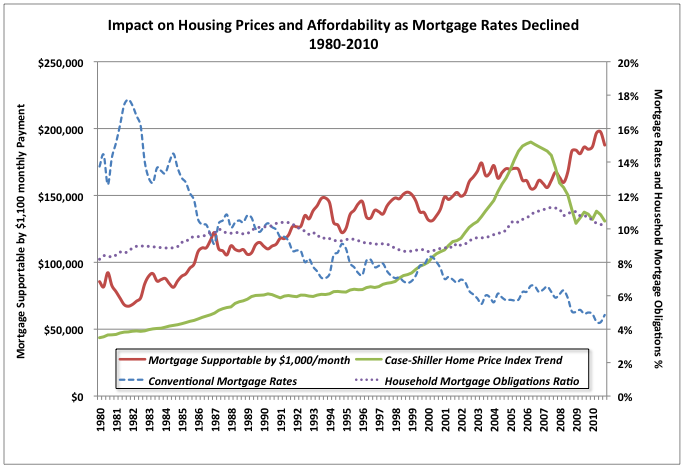 The financial crisis was built on the conclusions people drew from this decades long trend in price appreciation. Many -- Standard & Poor's famously among them according Michael Lewis in The Big Short -- concluded that home values would never decline across the board. The mortgage lending markets bought into this notion, as down payments -- the traditional protection for lenders against declining values -- all but disappeared.

But if declining rates were the driver of price appreciation, what does this portend for the housing market if we have reached the floor in long-term interest rates? The factors that could drive interest rates and mortgage carrying costs upward -- economic growth, a domestic debt crisis, waning international buyer interest in our securities, sunsetting of QE2 -- seem more likely to transpire than those that would push rates lower -- reduced U.S. borrowing, depression, deflation, renewed global economic collapse. As such, if a driver of the housing market has been steadily declining long-term interest rates, perhaps it is no longer reasonable to expect the housing market to be a driver of our economy for the simple reason that it is no longer reasonable to expect interest rates to continue to fall.

Standard & Poor's should not be puzzled. We are on the downside of the bubble now, and that should have a fundamental impact on the prospects for recovery of the housing market. If prices can fall, the psychology of home buying is very different, and for all the reasons that prices rose over the past decades, they could well continue to fall going forward if interest rates trend upward. Today, a $200,000 mortgage at 4.5% costs just over $800 per month. An increase in mortgage rates by just 1.5% to 6% increases that monthly payment by 33%, while a return of mortgage rates to the 8% level of the mid-1990s increases the monthly payment by 45%. Accordingly, rising rates would reduce home affordability and assert downward pressure on prices -- just as falling rates pushed home values upward over the past several decades -- and even just the risk of future price uncertainty should affect buyer confidence.

And there are other reasons home ownership may have lost its patina, further suppressing demand. Babyboomers, downsizing now that the kids are gone, may rationally choose to rent rather than own, if price appreciation will no longer be a given. And for them and their children in today's workforce, mobility may be of greater value than the rootedness of owning one's home. You only have to ask the residents of Michigan, who found themselves unable to move to pursue opportunity, tied down by the equity they hope still remained in their homes.

Home ownership is part of our identity. For some it is a rite of passage to adulthood, while for others it is what binds a family and neighborhood together. Those are attributes without financial measure. As such each spring, homes will be spruced up for sale, and buyers at a Sunday open house will find the place of their hopes and dreams. That is not going to change. But the interest rate driven growth in values of the past quarter century is behind us, and those looking for a sustained rebirth of the housing sector -- waiting for the escalator to start once again -- may have a while to wait.