The central question of climate change is, how will it affect humanity? New research has been published examining this question, estimating which regions are most vulnerable to future climate change (Samson et al 2011). The researchers then compared the global map of climate vulnerability to a global map of carbon dioxide emissions. The disturbing finding was that the countries that have contributed the least to carbon dioxide emissions are the same regions that will be most affected by the impacts of climate change.

To estimate the impact of climate change on people, scientists from McGill University, Montreal, developed a new metric called Climate Demography Vulnerability Index (CDVI). This takes into account how regional climate will change as well as how much local population is expected to grow. They incorporated this index into a global map and found highly vulnerable regions included central South America, the Middle East and both eastern and southern Africa. Less vulnerable regions were largely in the northern part of the Northern Hemisphere.

Next, they created a map of national carbon dioxide emissions per capita. They found the countries most severely impacted by climate change contributed the least to greenhouse gas emissions. It is quite striking that blue, less-polluting regions in the CO2 emissions map correspond to the red, highly vulnerable areas in the vulnerability map. 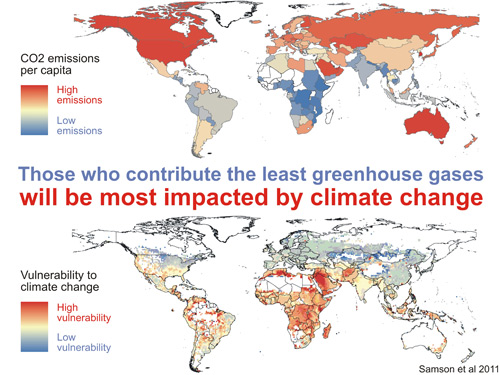 The study didn't delve into the question of which countries are least able to adapt to the impacts of climate change. But it doesn't take a great leap of the imagination to surmise that the poor, developing countries that emit the least pollution are also those with the least amount of infrastructure to deal with climate impacts. So we are left with a double irony -- the countries that contribute least to global warming are both the most impacted and the least able to adapt.

This research put into perspective those who try to delay climate action, arguing that "CO2 limits will hurt the poor." This argument is usually code for "rich, developed countries should be able to pollute as much as they like." This presents us with a moral hazard. If those who are emitting the most greenhouse gas are the least affected by direct global warming impacts, how shall we motivate them to change?