Most adults have some experience with driving a motorized vehicle, and whether you're a road rager or a calm commuter, you've probably had a few of the same thoughts while navigating the roads. 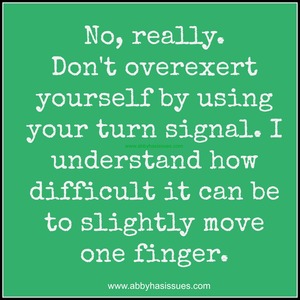 I don't care if my mirrors are perfectly adjusted, I'm still going to turn around and look while I back out of the driveway.

Sigh...more like, "Warning: Objects in the mirror may appear older and more haggard than you would like them to appear."

Where is the street that I have to drive down? Maybe turning down the radio will help.

What?! I just got gas five days ago!

Crap. What side of the car is the gas tank on?

(Singing to radio) I should be a singer.

(Dancing while signing to the radio) I should also be a dancer.

OH MY GOD I HAVE TO SNEEZE THIS IS THE SCARIEST THING EVER!

The number of red lights I hit is directly proportional to how bad I have to pee.

Oh, good Lord people. It's a four-way stop. Not a Rubik's cube.

Since I have all this extra time, I should probably rehearse arguments in my head, just in case they should ever come up.

That car a few miles back let me in, so I'll be nice and let you in, too. HEY! WHERE'S MY FREAKING WAVE?! That's it. I'm done being nice.

I love the sense of community formed when a line of cars joins up to prevent a jerk from cutting in at the front.

OHMYGODISTHAT...ugh. Commercials and songs should NOT be able to include a siren while I'm driving.

Do I have to turn on my wipers or can I see through these drops for another couple miles?

If you beep your horn .03 seconds after the light changes green, I can promise I will shut off my car, lie on the hood and feed birds for an hour.

What are you doing in the fast lane? Seriously?

A car is not an invisibility force field that shields you from the general conventions of society. We can see you picking your nose.

Crap. Now I have to pick my nose. Is anyone looking?

Get off your phone you idiot.

I hope my car appreciates the fact that wince when I hit a pothole.

There is no need to stop completely when making a 90-degree turn where there's no stop sign, stop lights or opposite-direction traffic.

Do I honk? Do I not honk? Has the window of "honking" passed?

The car that was driving slowly in front of me just turned, so I better drive fast now so the cars behind me don't think it was my fault.

The back windshield full of Beanie Babies kind of contradicts the "Thug Life" bumper sticker on your minivan, dude.

Seriously semis? Do not race the semi truck in the lane right next to you, forcing all of us to watch this sad little drama play out. Nobody wins, especially the lines of cars stuck behind you.

Nothing says "midlife crisis" like a yellow sports car.

People who don't understand how to use a blinker should probably just stay home.

Was that a cop? I should get extra credit for going the speed limit while driving through that unexpected speed trap.

(Gives a little wave to the pedestrian.) OK. Walk along...a little quicker. No, really. Stop in the middle of the road and contemplate life while I wait to make a left turn.

Are you taking a photo? Of yourself? You're in a car. That makes no sense.

I need one of those stick person window decals of a distressed woman on the couch with the fridge decal stuck way on the other side of the window.

Okay. Maybe I'm the only one who thinks that last one, but you know, it's a "Thug Life."