My girlfriend loves to shop. And she's French, which means that, in my mind, she is automatically more fashion-forward than half the people I know. Neither of us goes in for the far edge of the femme/butch binary, but I can also say that I am more apt to wear thongs and maybe (maybe) a dress to a wedding, while she really won't wear either, especially not a dress. Ever.

But this also means that it's a struggle to find clothes that fit well. Jeans shopping, while a trial for almost everyone, is complicated by the fact that women's styles are too tight and men's styles just plain don't fit: They are too small in the waist and too long in the crotch. Button-down shirts? Men's shirts are way too tight in the hips, the arms are too big, and if you have any amount of cleavage, well, no luck there. Why do designers feel the need to put embellishments like little bows on women's button-down shirts? Or frills?

I know this isn't the first time many of you have heard this complaint, or you may have even said these things yourself. However, in the past few years, I've noticed a lot more designers, and a lot more queer and lesbian designers, stepping up to create androgynous styles and clothes. The butch/femme dynamic is a spectrum, and there are at least a dozen words and combinations of words that women use to self-identify. My girlfriend and I don't need every moment to be a political statement about gender-bending; we just want clothes that fit, that we can feel comfortable in. And we realized that this feeling also extends to underwear.

Has anyone else noticed that underwear for women is extremely gendered? It's like walking into a toy store and seeing the boys' side with bright colors and trucks, and the girls' side washed in a sea of pink. Women's underwear is skimpy, lacy, flowery and pastel- or pink-colored, and if it's not lacy, or if it doesn't have flowers, it's pretty boring: solid colors (sometimes still pastels), stripes or polka dots.

Some people might argue that women have a lot more options for underwear because they can have their pick of both sides of the store -- the men's and women's cuts and colors -- while men are usually forced to conform to the prevailing gender standards of the options on the men's side of the store. But for women who don't want to wear the women-specific cuts, if you look at the more gender-neutral styles -- boxer briefs, specifically -- women don't have that many options. On the women's side, it's still pink. For men, there are many different specialty underwear brands that provide a myriad of graphics, fabrics and colors. So why not wear men's underwear, as a lot of lesbians we know do? Well, they're not that comfortable. Men's waistbands are just too tight, and the whole shape isn't cut right if you have any mention of a woman's hips. They are also made of thicker, heavier fabric. And the whole bit of extra fabric in the front? Really, we don't need that. I promise.

My girlfriend has the hardest time finding underwear that she feels comfortable and sexy in. And isn't sexy the feeling that everyone wants to have in their underwear? I decided to take it upon myself to find these elusive women's boxer briefs that are sexy and cool, fun and exciting, and not boring or pink -- a pair of women's cotton underwear that offered graphics that weren't completely gendered and girly, with that stylish wide waistband. I spent hours online looking to buy underwear for my girlfriend as a Christmas present two years ago. What did I find? I came across one or two companies overseas making this type of underwear for women, but their products were made of polyester fabric and were expensive to ship; I could not find anything similar available in the U.S.

When she came home from work that day, I looked at her point-blank and said, "We have to make underwear. Period." And that's how we came up with Play Out. When we couldn't find the style we wanted -- sexy, comfortable and exciting but not overly pink and girly -- we realized that a lot of lesbians probably have the same problem. It took us two years to design the cuts and find the right graphics.

We don't get to show off our underwear very often; there are only a few people -- childhood friends, old lovers, significant others -- who have seen you in your underwear. But even under your clothes, you know what you are wearing. Wearing underwear that fits your personality and style, no matter your gender presentation, can make you feel more confident and comfortable in your own skin. We started out with three cuts and three graphics and are excited that not only have butch-leaning femmes liked wearing our underwear, but so have femme-leaning butches. We should all be able to be sexy and comfortable with who we are. In our underwear. 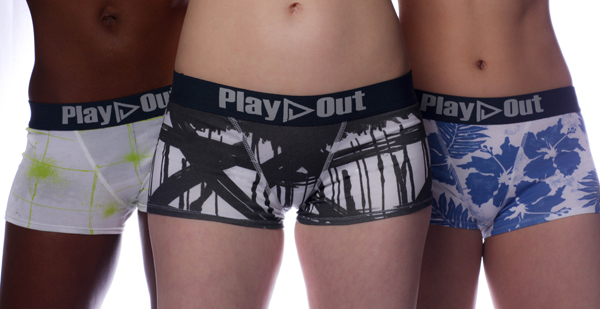 For more information on Play Out Underwear, visit the official Kickstarter page.