LONDON (AP) — Tens of thousands of students marched through London on Wednesday against plans to triple university tuition fees, and violence erupted as a minority battled police and trashed a building containing the headquarters of the governing Conservative Party.

Organizers said 50,000 students, lecturers and supporters demonstrated against plans to raise the cost of studying at a university to 9,000 pounds ($14,000) a year – three times the current rate – in the largest street protest yet against the government's sweeping austerity measures.

As the march passed a high-rise building that houses Conservative headquarters, some protesters smashed windows as others lit a bonfire of placards outside the building.

Office workers were evacuated as several dozen demonstrators managed to get into the lobby, scattering furniture, smashing CCTV cameras, spraying graffiti and chanting "Tories Out," while outside police faced off against a crowd that occasionally hurled food, soda cans and placards.

"We are destroying the building just like they are destroying our chances of affording higher education," said Corin Parkin, 20, a student at London's City University.

The violence appeared to be carried out by a small group as hundreds of others stood and watched. Anarchist symbols and the words "Tory scum" were spray-painted around the building, and black and red flags flew from atop an office block beside the 29-story Millbank Tower.

Rooftop protesters threw down water, paper – and in one case a fire extinguisher, to boos from the crowd below.

Police said eight people, a mix of protesters and police officers, were taken to hospitals with minor injuries.

The Metropolitan Police said, "A small minority of protesters have taken it upon themselves to cause damage to property, whilst the vast majority have peacefully made their point."

Nearby, the headquarters of Britain's MI5 spy agency, Thames House, was sealed with heavy metal doors as police guarded the rear exits.

Organizers condemned the violence. Sally Hunt, general secretary of faculty group the University and College Union, said "the actions of a minority, out of 50,000 people, is regrettable."

Elsewhere, protesters were peaceful but determined.

"I am here because it is important that students stand up and shout about what is going on," said Anna Tennant-Siren, a student at the University of Ulster in Coleraine.

"Politicians don't seem to care," she said. "They should be taking money from people who earn seven-figure salaries, not from students who don't have any money."

"This is about turning colleges and universities from learning institutions into finishing schools for the rich," she said.

Britain's Liberal Democrats, who are part of the coalition government with the Conservatives, pledged during the country's election campaign to abolish fees.

Protest leaders said they would attempt to use recall powers to oust lawmakers who break campaign promises on the issue.

The National Union of Students said it would try to recall legislators from the party who vote in favor on the hike.

"We will not tolerate the previous generation passing on its debts to the next, nor will we pick up the bill to access a college and university education that was funded for them," said union President Aaron Porter.

While British tuition fees are modest compared to those at some U.S. colleges, British universities are public institutions. Opponents of the tuition increase have pointed out that Prime Minister David Cameron and other members of the government attended elite universities such as Oxford and Cambridge at a time when university education was free.

The previous Labour government of Prime Minister Tony Blair introduced the first fees for students soon after it was elected in 1997. Scotland abolished tuition fees in 2000, and in the rest of Britain the cost is capped at about 3,000 pounds ($4,800) a year.

Prime Minister David Cameron's government plans to triple that and cut funding to universities as it strives to slash 81 billion pounds ($128 billion) from public expenditure over the next four years.

Raphael G. Satter of the Associated Press contributed to this report. 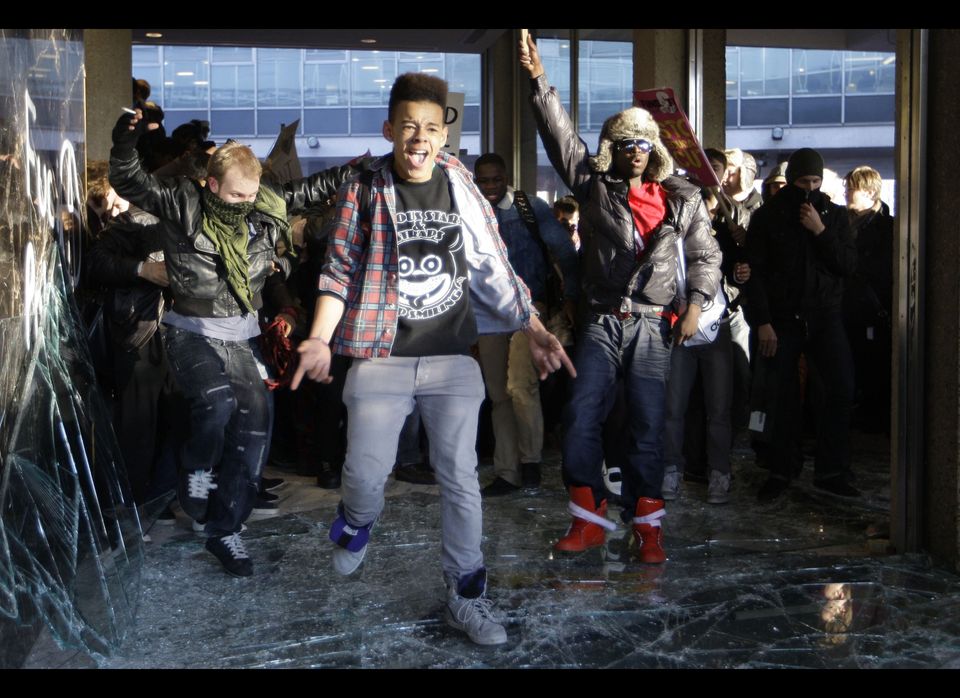 1 / 14
Demonstrators occupy the foyer of Millbank Tower, housing the headquarters of the Conservative Party, during a protest in London Wednesday Nov. 10, 2010, against an increase in university tuition fees. Organizers said 50,000 students, lecturers and supporters were demonstrating against plans to raise the cost of studying at a university to 9,000 pounds ($14,000) a year - three times the current rate. (AP Photo/Sang Tan)
AP