At the University of Havana on Monday morning, Josefina Vidal, director of the Cuban Foreign Ministry's department for the United States, held up a grainy printout of a 39-year-old document bearing the signature of president Jimmy Carter. "This was a secret document until 2002," she said. The two page presidential directive, issued by Carter on March 15th, 1977, bears the heading "Subject: Cuba."

"It was a simple directive," said Vidal, "short, barely a page and a half." In it Carter outlined his belief that "we should attempt to achieve normalization of our relations with Cuba. To this end, we should begin direct and confidential talks... with representatives of the Government of Cuba."

Vidal's audience was a crowd mainly composed of students from the University, who were on hand to protest the 54-year-old embargo of Cuba imposed by the Kennedy administration in February of 1962 (The Eisenhower administration had imposed a more limited embargo in 1960). For many Cubans, the Carter directive demonstrates the gulf that has long existed between the stated objectives and actual policies of various U.S. administrations. "It was not possible, in his presidency, to advance towards normalization of relations," said Vidal. "Now President Obama has issued something more extensive."

The Obama administration, since it announced the normalization of relations with Cuba nearly two years ago, has maintained a stated commitment to ending the embargo. When Obama spoke in Havana in March of this year he stated this intention clearly (while mixing up his Spanish genders): "Es un nueva día... the embargo's gonna end. When, I can't be entirely sure. But I believe it will end. And the path that we're on will continue beyond my administration. The reason is logic... if you keep on doing something over and over again and it doesn't work, it might make sense to try something new."

In a country where political protest remains tightly controlled by the government, it can be hard to tell where state propaganda ends and grassroots activism begins. But the U.S. embargo is one subject on which there seems to be broad agreement. One student sent me the photo below via Facebook, along with her estimate that 3,000 people were in attendance: 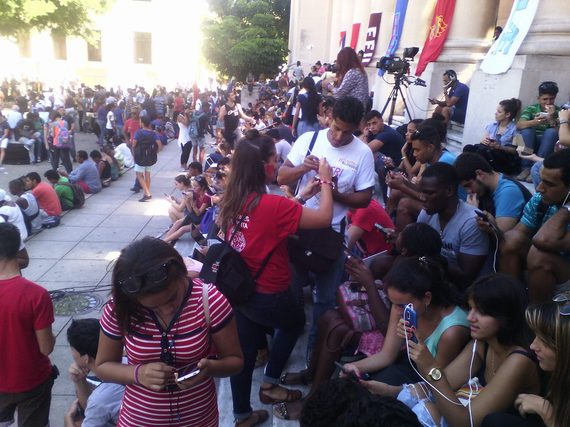 "Here everyone is in favor of lifting the blockade," she told me, using the Spanish word "bloqueo". Although there has not been a physical blockade of Cuba since the 1962 missile crisis, and while the U.S. does not restrict Cuba's trade with third parties, the Cuban government prefers to use the term bloqueo instead of embargo for its greater rhetorical force. The "bloqueo" has long been a staple of propaganda imagery within Cuba in posters like this one (via Granma, the official newspaper of the Cuban Communist Party:

This video, from RadioDelSur, shows some more of the protest that took place this morning:

Although internet access is highly restricted in Cuba, the government has been creating free public WIFI hotspots in recent years. The same student told me that while internet is always available at the University, the signal's strength and reach had been enhanced for the protest to allow people to promote it on social media, especially on Twitter, under the hastag #YoVotoVsBloqueo (I'm voting against the blockade).

While the normalization of relations has proceeded apace and travel restrictions have been greatly relaxed, the future of the embargo is still uncertain. It's reasonable to assume that a Hillary Clinton administration would continue the Obama policy, but the Republican congress (which will likely remain Republican come January) has so far shown little interest in calls to lift the embargo. That's why activists and government officials in Cuba are trying to keep up the pressure. "The people here don't believe words from anyone," said the student who contacted me. "We need to see to believe."

When Vidal was finished, she took questions from those in attendance. The first, from a student in international relations named Rachel, expressed the widespread anxiety of many Cubans over the prospect of a Donald Trump presidency and what that might mean for U.S.-Cuban relations. Vidal did not mince words.

"The 8th of November... we'll know who's going to be the next president of the United States. Let me reiterate, this directive is President Obama's... but the president who follows him is not obligated to continue it. He can revoke it completely... it depends on the will of the future government."

The protest received support from elsewhere in Latin America, including from Bolivia: