Kimberly Brooks's "Thread" at Taylor De Cordoba is neither about fashion nor the women who bring it to life but about how fashion lives but for the moment it's worn. It's about the expectations that clothes elicit, and once those expectations are met, memories of the occasion create attempts to rekindle the irretrievable beauty of, say, a "Sunset Boulevard" Gloria Swanson. As such, the show offers a metaphor of aging: we do, style does, and, as is the case here, specific time spent in the particular clothes does. 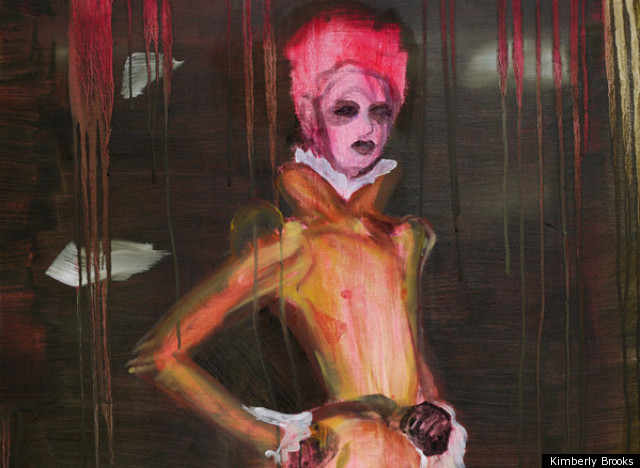 The show waxes lugubrious, the result of waiting for something or someone that doesn't arrive. The faces are bland and featureless. Some appear in shadows and, in certain instances, are shadows. Some appear waxen as if at a wake, their wake, while others appear as if at a macabre masquerade ball. The overall effect is that of a post-apocalyptic fashion show (a nice image for looking back on one's youth), with art direction by Tim Burton, refracted through Goya or Velazquez, and scripted by Cormac McCarthy. 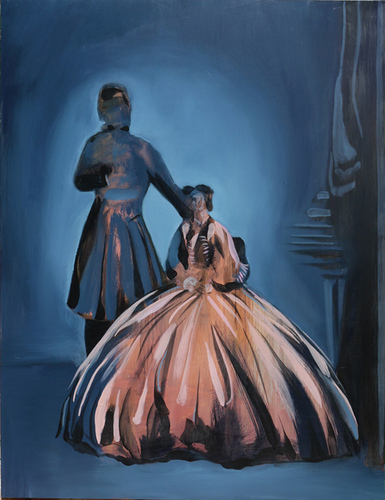 Not so much feminine as asexual, the farthest thing imaginable from elegant or chic, the women may strike a conscious pose - they know their likeness is being captured - but they all look shrink-wrapped. Their model's hardly-modeled face epitomizes blah, a state of couture obsolescence and personal irrelevance. The woman in Highrise clearly articulates, while the rest allude to alienation, not just from their clothes, their environment, but from themselves. Hardly comfortable in their clothes, they are even less comfortable in their skin, much less their lives. 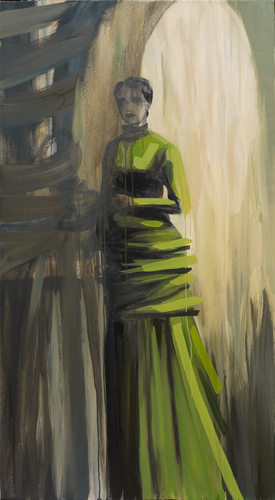 The portraits feel cartoonish; this strikes a nice dynamic between high fashion and lowbrow culture. The women in The Confidant and Punk History have heads that look as if they're about to be teleported to another solar system, giving them a sci-fi sense. Though their titles (Punk History, The Victorian) suggest specific eras, these two women in particular and the rest of them in general are not of that time and place or any time or place. They seem like re-imaginings of better days that were never better in the first place and thus have a treacly feeling, a Francis Bacon feeling, as if they're disintegrating at an atomic level, from the inside out. A female version of Edvard Munch's The Scream in a Stella McCartney dress wouldn't feel out of place here.

Perhaps failed romance brings the women to this state of alienation. The posture of the woman in Bing Theatre suggests that she's been spurned. The red seatback behind the woman in Soho House suggests a heart, as does the blue shape behind the man in The Passage. The Passage could conceivably be a marriage portrait, if it didn't look as if someone tried to rub out the image of the man (and which could conceivably have led to the solitary woman in the claustrophobic Edward Hopperesque "Highrise").

The exhibition reads like a designer's preliminary sketch laid out on a storyboard, ready to be fleshed out. It offers a keen and incisive commentary on the user-end expectations of fashion: to be escorted by a man, to turn heads at galas, theaters, and commemorative portraits, all of which in retrospect result either in prettified mummies or else in sitters who are a lot more lonely than their attire and setting would suggest. 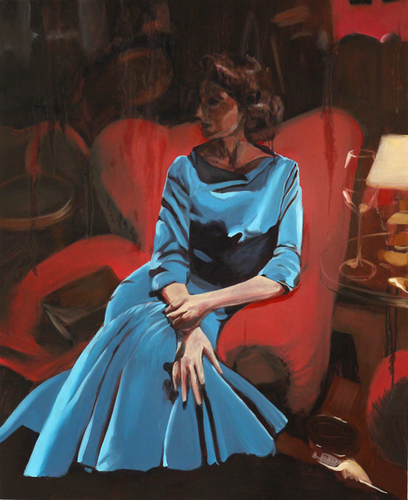