In this exhibition at the Studio Channel Islands Blackboard Gallery in Camarillo, threads converge and commonalities are laid bare among a group of artists who each in their own way pursue the elusive connections between nature, experience, and abstraction.

Thread is a material; and to thread is an action. Bare is an adjective; and to bare is an act of revealing. A thread is a way of tracking an idea through different incarnations and across conversations; as a sewing tool, thread is something that stitches and holds together disparate parts, creating a new whole. To thread is also to carefully toe a line, push boundaries, hit a sweet spot in between edges. To bare is to uncover, to make naked, to make clear -- bodies, the truth, hidden connections. Such is the poetry of paradox; and such is the paramount role of language in creating meaningful context for experiences of art and of the world. In the case of the artists in THREAD/BARE, language is also a prism through which unexpected correspondences emerge. Besides an appreciation for the multifaceted generosity of language, these artists also share a vital interest in the transformative, even alchemical, effects of art making as an action.

These artists make very different-looking work for very different reasons -- and are thrown together more or less by fate, by occupying studios in the same campus -- yet still frequently employ the same words (abstract, intuitive, visceral, organic, transformed, collaged) and even some of the same non-traditional materials (monoprints, rust, pieces of the natural world, and yes, thread). More than one use ceramics, more than one make prints that become elements of paintings. While all six refer to nature in their content, more than one directly incorporates actual artifacts of nature into the work. More than one use found and original text. Including but not limited to incorporating books and/or pages. More than one directly engage with personal/family history; and all expand the concept of narrative to include the ambiguous and symbolic, because while formal issues are the language, storytelling is the impulse. Perhaps most saliently, all of them consciously wrestle with the shifting terrain of the abstract/figurative continuum -- which in part explains why their work hangs so well together as a formal matter, but also speaks to the overlaps in their thought processes and studio practices. And finally, all seem to accept that they are asking open-ended questions.

"Abstraction is one of the greatest visionary tools ever invented by human beings to imagine, decipher, and depict the world." -- Jerry Saltz

"There is no abstract art. You must always start with something. Afterward you can remove all traces of reality." -- Pablo Picasso 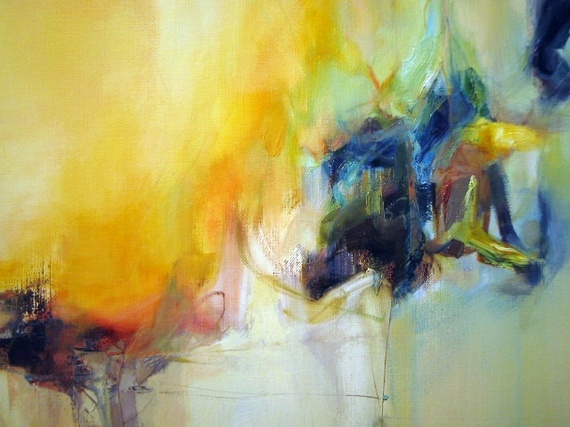 Elana Kundell is the first to admit that one can't invent what already exists in nature -- but one can certainly claim it, renew it, and make it personal. Her rather opulent and evocative abstract paintings operate like tiny ecologies, deftly resembling landscapes and atmospheres despite being resolutely non-figurative. Densely detailed, cracking with life, creating paradoxical pictorial space, and appealing to the brain's atavistic pattern-seeking, Kundell's paintings trigger a deep sense of recognition but remain ambiguous. The rich and emotional array of cool, earthy, fiery, and jewel-like colors sewn into these "landscapes" make their atmospheres seem familiar, despite being fanciful and invented. Her topographical surfaces have a geological sparkle yet are obviously made of paint wielded by a person -- rather than, say, contoured by centuries of exposure to the elements -- so that viewers end up thinking about art-making in a general, philosophical, even esoteric way in addition to contemplating the compelling physical terrain of her pigment.

Susan Kurland has a professional sewing background, having worked in the fashion and theater industries -- but just as importantly for her fine art practice, she has a personal history with it as well. Her family matrilineage is rich with talented stitchers who worked for love, for money, and for posterity -- and from whom she inherited a trove of what could be called artisanal heirloom thread and textiles which could rightly be called the raw materials of her art. Her mounted plexiglas pieces resemble the reverse side of an embroidery hoop, but also evoke drawing and expressionist painting in their combination of gravity-directed lines, contours, color pools, and the scattering of chopped-up fabric, like a map of her memories. Abstract yet subtly political, her sculptures too are about the qualities of the material as well as the history of their traditional use. In that context, her incorporation of the ceramic body shapes inside the wrapped, color-field cocoons of her found-object sculptures can be seen as not only a formal choice, but also as a feminist investigation. 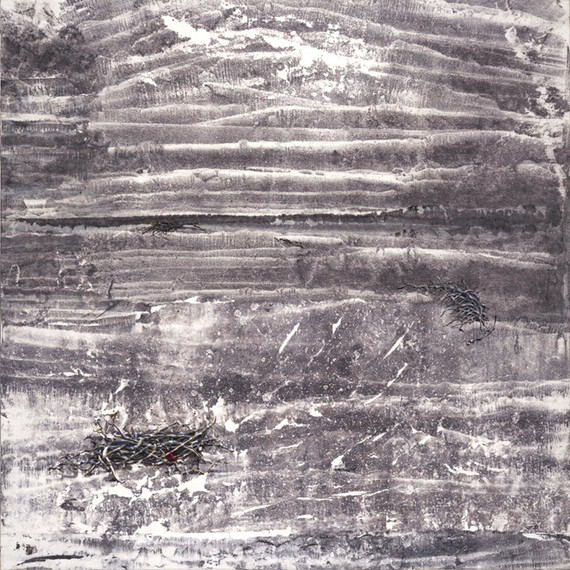 Nurit Avesar is known for compositions that strikingly juxtapose pattern and portrait, yet lately the figures have receded in favor of the abstract elements -- speaking to the archetypal emotions animating their stories. Avesar makes monoprints based on photographs then manipulates and paints over them, so that the finished work contains literal traces of its own ancestry in its finished form. Her favorite subject is water -- already formally abstract as it is and a common metaphor for the subconscious; its features are dictated by fractal laws of nature. Her black and white and rust works often use oxidized metal grown directly on the painting surface -- achieving a colorful embodiment of time's passage, visually invoking a distant past. Frequently her work is also about the destructions waged on people and places by both war and by time. Avesar herself is second generation and in a way her technique and process reflect this, considering the evolutionary steps through which the elements of her works move on the way to emerging as something alive and new.

Michael Clinite's original inspiration is nature -- with a vector of human psychology. Rather than depict the luminous, fluid wonders of the natural world like rain and sand and abalone shells, he cultivates those processes within his canvas (or paper, or found wood panel, or printing press). He grows rust inside his pigments; he might add salt crystals and other non-traditional materials; and he makes then incorporates monoprints into larger mixed media compositions. Sanding, layering, and "waiting to see what happens," he takes the scenic route, the long way around, so to speak -- the paintings are as much lab notes as images. But they are also meditative studies relying his instincts for "finding" images inside the amorphous grounds, in the spirit of a favorite book: 1967's The Hidden Order of Art: A Study in the Psychology of Artistic Imagination by Anton Ehrenzweig in which the author observes that "superficially insignificant or accidental looking detail [in art] may well carry the most important unconscious symbolism." 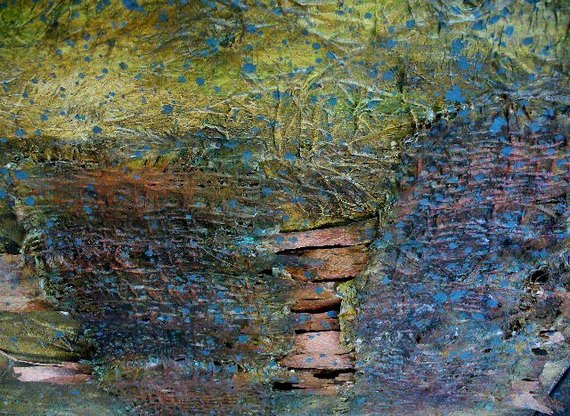 Sigrid Orlet's background in the field of Creativity Studies had her "investigating the complex nature of symbol formation in deep scientific inquiry. I am an artist-archaeologist. My artwork is a collection of visual field notes." And her moving and innovative mixed media paintings and sculptural installations give literal and allegorical form to this conceptual foundation. Using hefty, dimensional materials like burlap, and dried plant roots, and favoring a richly, fertile palette of earth and autumnal shades along with sensual, distressed, painterly surfaces and salient pieces of text, Orlet both honors and generates the symbolism of a kind of pagan art history. Spiritual rather than dogmatic, her work is experiential, multisensory, dimensional, temporal, devotional, and scientific. In pursuit of an aesthetic beyond meaning, it asks "what happens when you go to a place of not knowing?" -- demonstrating a willingness to question even one's own most firmly held beliefs -- including about what art can be. 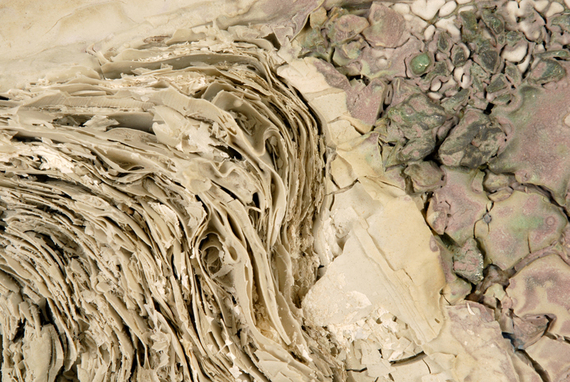 Janet Neuwalder works primarily in ceramic and clay, but very often in direct conjunction with academic objects (such as books) and artifacts from the natural world. Through her unique processes of encasing and decontextualizing, she transforms her objects away from their original functions and contexts, instead drafting them into a conversation about art and alchemy, with a hint of institutional critique for our culture's obsession with categories and labels. Reconstituting her inspirations as objects which are both fossils of themselves and enjoying new life as part of original works of art, Neuwalder's relationship to nature is both collaborative and conceptual, walking the line between image and abstraction while highlighting the transformative power of art-making as a way of understanding the world around us -- along with an implicit acknowledgement that all the best ideas are derived from nature.

A CLOSING RECEPTION AND PANEL DISCUSSION ON THE NATURE OF INSPIRATION HAPPENS SUNDAY, JANUARY 26, AT 4PM.