Sea turtles be warned: A new report has found nesting sites in India, Sri Lanka and Bangladesh are some of the most dangerous places in the world for you to be.

Published in the online science journal PLoS ONE this week, the study is the first to assess individual sea turtle populations around the world to determine which are the healthiest and which are the most threatened.

According to the report produced by IUCN Marine Turtle Specialist Group, four of the seven sea turtle species have populations within the world's 11 most threatened.

Dr. Bryan Wallace, Director of Science for the Marine Flagship Species Program at Conservation International told The Huffington Post, "One of the strengths of our report is that it gives managers and conservationists a look under the hood of the scores, at what is the driver of the scores. Then they can figure out what the major threats are and address them."

To determine the most threatened populations of the seven species of sea turtles, experts scored traits that determine if sea turtles are more vulnerable to threats. These included population size, population trends, nesting sites, and genetic diversity. Wallace said major threats to sea turtles included fisheries and consumption. "India still has an enormous trawl issue, which contributes to turtle bycatch and there is still a lot of consumption of turtles and their eggs," he said.

"Until this report, we could only see how sea turtles were doing globally. Now we have an assessment on all of their populations," Wallace said. "Ultimately what it provides is a prioritization framework. It provides the best, most holistic perspective to help maximize resources and work to recover populations."

Wallace said the findings of the healthy turtle populations were exciting because it showed they were recovering. "It's not like healthy populations somehow missed out on being threatened. They represent a population that has been depleted and recovered. For example, in Brazil, green turtles are on the rise. So there are lessons being learned, like monitoring nesting beaches. In Australia, Japan, Brazil and the U.S. populations have all increased in the last decade or more." He added, "It is kind of a slow process, but if we take a page from their book -- slow and steady wins the race."

So, according to the report, if you are a sea turtle, you are probably better off sticking around the waters of Australia, Brazil or Mexico, where some of the healthiest sea turtle populations can be found.

Take a look at where you can find the world's healthiest and most threatened sea turtle populations: 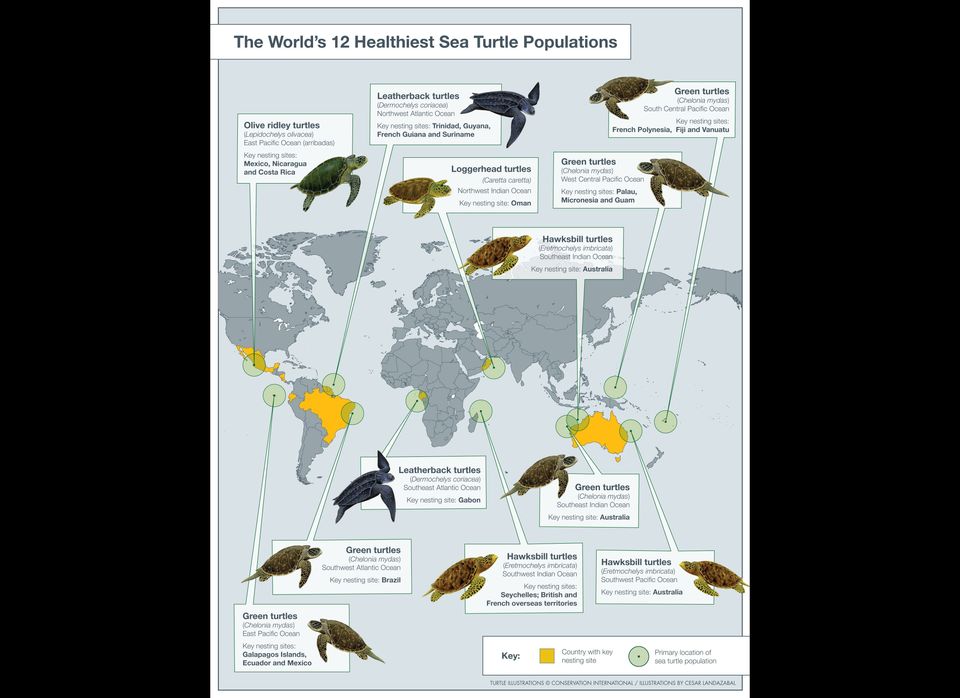