Let's take a well-deserved break from manufacturing and tax policy and cheer things up with a post on threats to the current recovery.

As I've stressed, in my humble opinion we're not yet into the virtuous cycle where we can count on above-trend growth to generate jobs, which boosts paychecks, which supports consumption, which signals investors to get into the game, which leads to more growth, etc.

But we're headed there. The best evidence for that is the improving job market -- that's been the missing link in the above cycle. Outside of public sector job losses -- there's your first ongoing threat -- net payroll gains have accelerated in recent months and that's helped to nudge down the unemployment rate which has ticked down by one or two tenths every month since last September.

In that spirit, the first two figures show steady, favorable trends in the four-week average of unemployment insurance claims, closing in on pre-recession levels, and the number of job-seekers per job opening, which has recovered about half of its losses since the downturn. 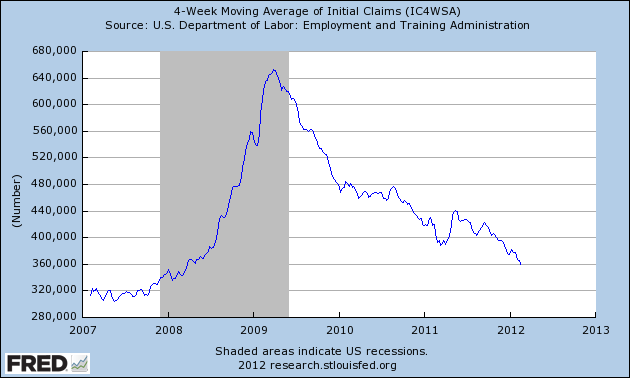 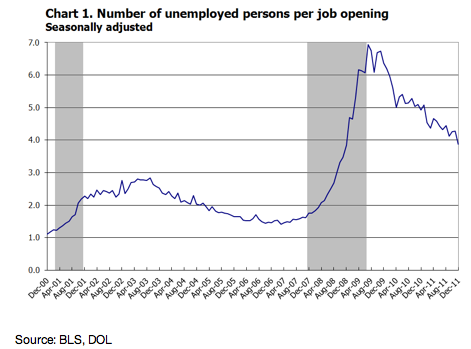 So, what could go wrong?

The conventional list is Europe, oil, and fiscal drag--which, to me at least, are ordered least to most worrisome (though "least" doesn't mean "not").

On fiscal drag, I offer this handy update from GS analysts which quantifies its impact in percentage points of GDP, including the impact of the just passed extension of UI and the payroll tax break (which helps prevent a bit more fiscal drag this year). Compared to the others -- though oil's a close second -- this one worries me the most because a) we see the damage each month with the state/local job losses, and b) given the current Congress, it's not going to improve. The other two can certainly bite us, but we can't know with certainty which way they'll bounce. 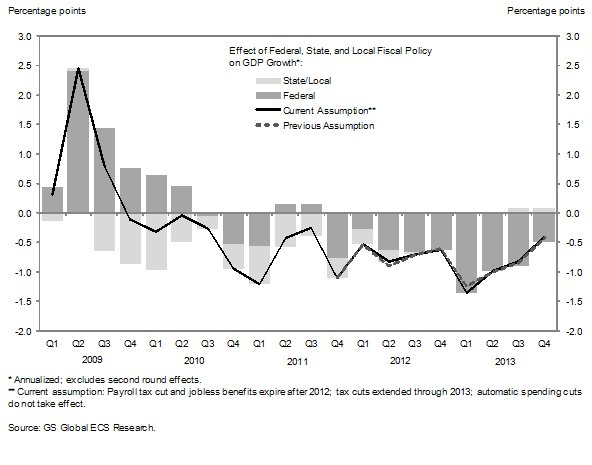 On Europe, I see three pieces needing to come together, and in the Lucy-with-the-football way this has consistently evolved, they too are moving forward. They are: Greek restructuring, Troika stability fund (IMF, EU, ECB), and the ECB stepping up to plate with more aggressive purchasing of sovereign (through its members' banks). Don't get me wrong--recession already appears to be once again upon the land over there, in no small part austerity-policy-induced. So real risk here, but compared to say the previous figure on fiscal drag, my median estimate is that Europe shaves 50 bps (half-a-percent) off of US GDP growth this year.

Re oil and gas... Oy. Over the past year, the average price at the pump is up about 40 cents, and that maps onto around $40-$50 billion less in disposable income, which, absent other moving parts, is enough to show up in slightly slower growth. We tend to describe higher gas prices as working like a tax on consumers, but economist Mark Zandi, who also views energy prices as a downside risk, recently wrote: "Worse than a tax, higher oil prices siphon off spending power with no offsetting government expenditures."

There are, however, other moving parts. As the President has pointed out, the payroll tax break is helpful in this regard, as is the fact that at least so far in the Great Recession and its aftermath, people have responded more elastically to higher gas prices (and income losses) by driving less, as shown in the figure at the bottom here. The tax break is also important because real wages (pretax) have been about flat of late, which is actually an improvement over a few months ago.

The US EIA -- a wonderful source for info on such things -- predicts pump prices to go up only a slight bit more, as shown below. Clearly, they're not predicting $4/gallon or above, but who knows? Though slower growth in China has been a bit of a pressure valve here, global oil capacity is once again tight, as are geopolitical tensions vis-à-vis Iran. So this tops my list of nervous makers. 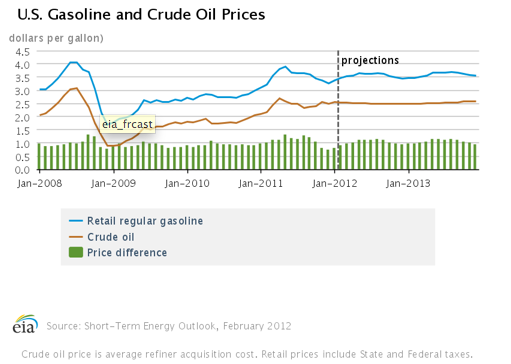 [Note: re the current Republican efforts to ding the President on rising prices at the pump, I'm with Brad Plumer. I'd probably go further and point out that domestic production, including nat gas, is way up, petroleum imports, including crude, are down, and in fact, 2011 was the first year in decades that we were actually a net exporter of petroleum products--see figure here. So the dude's got good street cred on the production side; it's just that he doesn't control the global supply...(not to mention seasonal effects)]

Re housing, it's bumping along the bottom but not getting much better. The best you can say--and this is relevant for this threat survey--is that we've largely flipped from housing bringing down the economy to the economy keeping down housing. If jobs and income continue to grow apace, or better yet, accelerate, we should see some new household formation and new demand for housing, especially given such low mortgage rates, but the system isn't there yet. 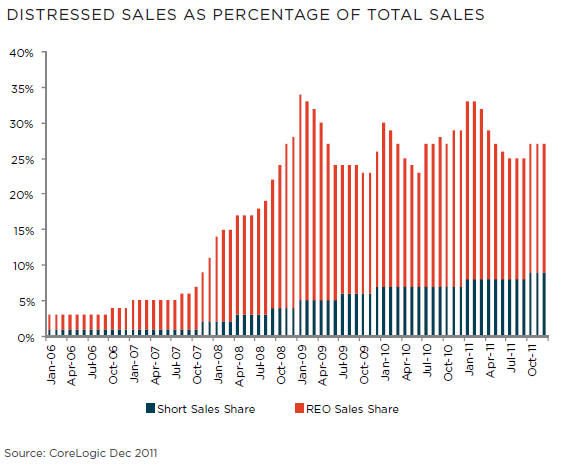 So the housing sector isn't much of a threat but it ain't helping much either.

The last figure shows three forecasts of the unemployment rate over this year and next: CBO, Goldman Sachs researchers, and Moody's Analytics. CBO is the most pessimistic, but that's because they assume the "current law" baseline which includes huge tax increases and spending cuts all hitting the economy at once next January. The full sunset of the Bush cuts along with sequestration (automatic budget cuts) leads to a decline in the 2013 budget deficit of about $500 billion. Only the most bloodletting austericons could stomach a fiscal contraction of that magnitude at that point in the cycle. 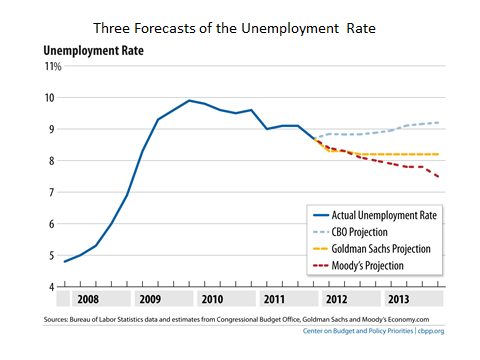 The Moody's team is most bullish, based on the improving job market boosting consumer income and investor confidence. GS forecasts GDP growth at about trend, so the jobless rate stays around where it is now. I don't think we're likely to let the current law baseline prevail, so I'd say stick with GS but hope for Moody's to be right.

All told, we're into a real recovery, but it remains fragile, it is not yet self-sustaining, and risk factors lurk out there. What worries me most is the lack of a public policy cushion such that if one of those risk factors flared up, we could count on policy makers to fight back. Jeez... imagine that.