But the subtext -- the wondrous, beautiful subtext -- in that one small sentence can fill pages.

The main message is: "Mom, I know who I am, and because I know who I am, I won't spend my life crashing around in despair, hurting myself and others, trying to be something that I can never be."

And then there's: "Mom, look how brave I am! Because even though you told me that being gay was more than OK, it's still scary to tell you, because I have friends whose parents kicked them out of the house at this exact same news, and please hug me right now!"

But the best subtext of all? "Mom, I love you and trust you to keep loving me unconditionally, the way you've loved me from the moment I was born."

All of that is exactly what I heard when my son, Jason, said those three little words when he was 15 years old. The relief I felt at "Mom, I'm gay" came with a rush of pride and love.

"I know," I said as I kissed his forehead and gave him that hug we both needed. "I've always known. I love you, and I'm so proud of you." And then, because I wanted to reassure my kid that everything was normal and fine, that nothing in either of our lives had changed in the slightest, I gathered up his laundry from around his hamper and teased him about his crappy aim.

I remember talking to my husband, Ed, after the very first time my gaydar pinged, back when Jason was 3 years old. I tiptoed into the conversation. "Would you be OK if... Jason is gay?"

The way that Ed blinked at me, and the sheer confusion on his face, are things I will forever remember. "Of course," he said, as if I were insane for asking. "Why wouldn't I be?" And then he smiled. "He's one of a kind."

"Jason is Jason," I agreed. And we both laughed, filled with our limitless love for our sweet little boy.

Those words became our battle cry through the years that followed: "Let Jason be Jason."

We worked hard to raise our son in a home where he always felt safe and free to be himself. And we made sure that Jason lived in a world where being gay is an option.

That wasn't hard to do. We added the word "gay" to our vocabulary, and we didn't whisper when we used it. We loudly admired out celebrities and gay rights activists. We encouraged Jason's love of theater, driving him endlessly to rehearsals, where he -- and we -- met a vibrant community that included a creative and eclectic group of LGBT people who -- bonus! -- became our friends too.

We implemented a no-gay-bashing rule in our home -- and anyone who entered had to comply. The word "gay" would never be used as a pejorative.

We encouraged and applauded Jason's individuality.

We tried our best to protect him from hatred and ugliness.

And most of all, we paid attention.

I used to shake my head when I heard about mothers who were shocked -- shocked! -- when their kids came out. I didn't understand how they had missed seeing something so essential when looking at their children.

But too many parents see only what they want to see, and that's true whether our kids are gay or straight.

But this shocked-that-my-child-is-gay thing is a special kind of not-seeing. It's a socially approved not-seeing. And yet that lack of vision and understanding made sense when I stopped to think about it.

If "gay" is not in your vocabulary, if being gay is not an option in your world, then you're far more likely to see your kid as anything but gay.

My formerly harsh view of those shocked mothers has softened as I've come to realize that many of them don't live in a community like mine, where being gay is an option. The word probably isn't spoken in their homes -- unless it's used pejoratively. Or maybe it's whispered when talking about someone's uncle, turning being gay into an awful secret instead of the bright and sunny normal that it is in my house, in my neighborhood, in my incredibly awesome, rainbow-filled corner of America.

That's changing, more quickly all the time. With the appearance of realistic LGBT characters in TV shows, movies, and books, with celebrities and sports heroes and political leaders coming out, "gay" is finally and consistently -- and matter-of-factly -- showing up in our national vocabulary.

We're at the point now where Americans must make a conscious choice to ban "gay" from their vocabularies if they want to live in a confining, restrictive, sadly gray world where being gay is not an option.

But whether you grew up with "gay" in your vocabulary, whether you've added it more recently, or you're still resisting that change, I think most people can agree that the grand prize of parenting is having a child who grows up to love and to be loved, and, ultimately, to be happy.

Today, Jason lives out in Los Angeles, where he works as an actor and a writer. He's still funny, sweet, generous, kind, and impressively talented. He's in a serious relationship with a wonderful man who loves him as much as I do. No doubt about it: My baby is happy -- and that's exactly what I dreamed he would be, back when he was a baby, sleeping in my arms.

And I know that his happiness is directly connected to his speaking aloud those three little words: "Mom, I'm gay."

I smile whenever I remember the first time he told me that. 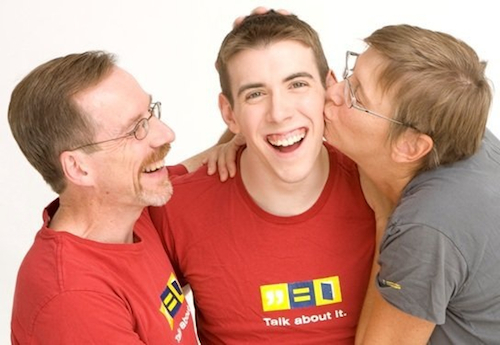