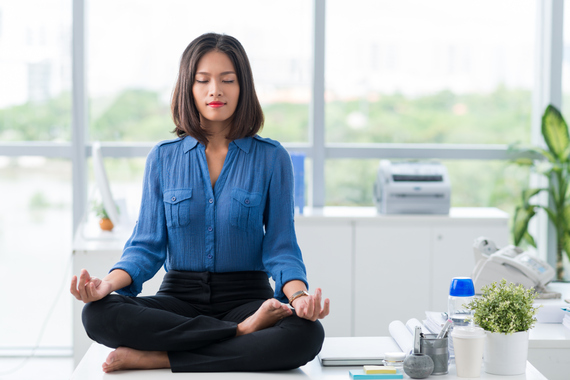 Research says mindfulness works for individuals. But does it work in the bottom-line-driven workplace, or is it just a frivolous feel-good program?

This is the question tackled in a growing number of studies -- and at an November 13-14 conference at the University of California, Berkeley, called Mindfulness & Well-Being at Work. There we'll discuss how cultivating moment-to-moment awareness might improve workplaces. In the meantime, here are three benefits to mindfulness on the job, based on four studies.

A.D. Amar and colleagues at the University of Westminster measured the self-perception of leadership skills among a sample of senior managers in the London area--and then put them through a 12-week secularized Vipassana meditation-training program.

Their results, published in the Academy of Management Proceedings, revealed that training significantly enhanced their overall self-confidence, as well as the individual skills like inspiring a shared vision and demonstrating moral intelligence.

"However," conclude the authors, "meditation did not statistically significantly enhance participants' skills as a role model and enabling others to act" -- areas that will need more study in the future.

As Greater Good reported in June, researchers found that the more mindful the supervisor, the lower their employees' emotional exhaustion and the higher their job satisfaction. But that study also revealed a caveat: When basic psychological needs like feelings of autonomy and connection with other people aren't being met, the employee can lose the benefits of having a mindful supervisor.

A new study, published in the September 2014 edition of Mindfulness, extends that study by specifically exploring the link between mindfulness and autonomy. The researchers recruited two hundred and fifty-nine participants, assessing them for their mindful traits -- like the ability to pay attention for long periods of time -- and exploring how much autonomy they felt like they had on the job (as opposed to facing a more controlling managerial style).

Echoing that previous study, the researchers found that both autonomy and mindfulness "had direct relations with employee work well-being." Feeling less-empowered at work was associated with a lower level of health and happiness. These indirect effects, found the researchers, were moderated by mindfulness -- meaning that more mindful people were less likely to feel frustration, even when supervisors squashed their independence.

"Mindfulness thus appears to act as a protective factor in controlling work environments," conclude the researchers.

If mindfulness works in the office, then what's the best way to deliver the training?

A study published in the Journal of Occupational and Environmental Medicine sought to determine whether an online mindfulness program created for a specific workplace, the Dow Chemical Company, could cut stress while enhancing the resiliency and well-being of employees.

Eighty-nine participants completed scientific scales designed to measure their degree of stress, mindfulness, resiliency, and vigor. They were then divided into two groups -- one to take the online class and one to sit on the wait list.

After the first group finished, the researchers came six months later to see how everyone was doing. They found that, in fact, the group that took the class was doing a lot better -- they were less stressed, more resilient, and more energetic than the group that couldn't yet take the class.

"This online mindfulness intervention seems to be both practical and effective in... enhancing overall employee well-being," conclude the researchers.

More:
Thrivethird metricGPS For The SoulMindfulnessmindful meditation
Newsletter Sign Up
An essential daily guide to achieving the good life
Subscribe to our lifestyle email.
Successfully Subscribed!
Realness delivered to your inbox