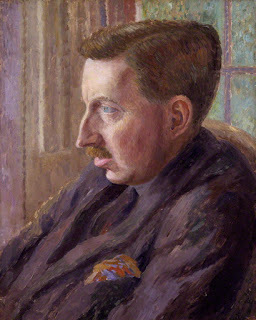 E.M. Forster was famous for his novel A Passage to India which dealt with the clash of cultures as a metaphor for the internal machinery -- human language -- that inevitably separates all individuals from each other. Noam Comsky might talk about a universal grammar, but both syntax and semantics conspire to create the modern form of a Tower of Babel, a tower of "paradigm shifts," to quote Thomas Kuhn's famous locution. A Passage to India should be required reading in a world where even a liberal minded organization like PEN can find itself divided by the conflict between free expression and a sensitivity to cultural differences, as manifested in the recent conflict over the Charlie Hebdo award ("Charlie Hebdo Award at PEN Gala Sparks More Debate," NYT, 5/4/15). Forster also wrote a book called Two Cheers for Democracy, a series of essays in which he defended liberalism. Here again Forster's mild mannered, ambivalent and often tortured thinking deserves to come to the fore. The classic liberal finds his or her views more threatened then ever in our current climate. He or she buckles at a multi-culturalism that threatens free speech while at the same time feeling protective of constitutional rights of those extremists who would stifle all expression. Will liberal ideals which champion privacy, constitutional rights and due process be able to survive in a world where government agencies increasingly need to take action? Will liberal ideals survive in a world where search warrants and Miranda rights go down the drain, as our fear of terrorism mounts? And can you make exceptions and suspend certain rights, under particular conditions? Oliver Wendell Holmes seemed to think so in the famous Schenck decision in which anti-draft sentiments at war time were equated with "falsely shouting fire in a theatre and causing panic." However, in a subsequent dissent, Abrams v. United States, he seemed to reaffirm the rights of expression in the same theater of war. The classic liberal is a latter day Hamlet, inhibited from action by too many thoughts and preconditions. And yet we sometimes forget that without all the questioning, without all the concern for due process and human rights -- that constitute the liberal mandate -- we would have nothing left to defend against the onslaught both of terrorism and its equally totalitarian backlash. You don't want to hear about wishy washy liberal ideals when your blood is boiling and you're ready to throw the baby out with the bathwater, opting for revenge at all costs. But isn't this exactly what the terrorists want? After they're finished pillaging the historical memory of antiquity, they'll get us to commit hara-kiri by doing away with everything we stand for.