During divorce proceedings, the devil is truly in the details. One small oversight in a divorce settlement agreement can cost hundreds of thousands of dollars over the course of your lifetime. Here are three examples of small mistakes, based on real-life examples, in which one party has suffered devastating financial consequences.

Example 1: Failing to account for cost of living adjustments in a pension division

Most pensions are paid out like an annuity, with a monthly benefit paid for a term of years (or ongoing for the recipient's lifetime). Usually, the monthly payment is adjusted annually to reflect the increase in cost of living.

If pensions are earned during a marriage, they are considered marital assets subject to division by the Court. The pension is often the most valuable asset in a divorce case, considering that it could be paid out for many years after retirement.

Because a pension is difficult to value in present dollars, the practical way to divide it up is for the receiving spouse to get a percentage (to be determined during the divorce proceedings) of the beneficiary's pension every month. However, if the receiving spouse's attorney fails to address the Cost of Living Adjustments (COLA), they will not receive an annual cost of living increase, even though the beneficiary will.

The receiving spouse will get 50% of the pension recipient's $6,000 monthly pension upon retirement, or $3,000 a month for the first year of the retirement.

How much is COLA worth?

Well, assuming an average cost of living increase of 3% (reasonable), over the course of 25 years receiving the pension (also reasonable), by the 25th year the spouse without the COLA increase will still be receiving $3,000 a month, while pension beneficiary will be receiving more than $6,000 a month! This is courtesy of the compound interest effect, illustrated in more detail below. 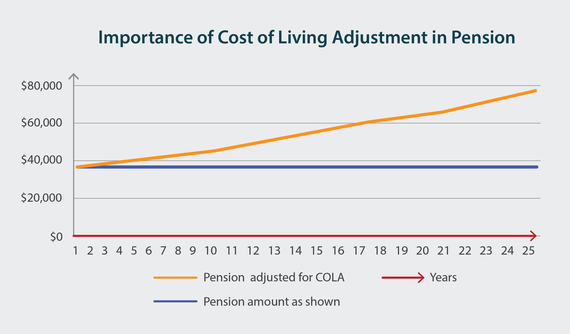 The total value of the differential between the two numbers over the course of the 25 years? $487,915!

Example 2: Valuation of a retirement account without considering passive appreciation


If you do not have a pension as your primary retirement vehicle, then you likely have a 401k or IRA. The money that accumulates as a result of your contributions during the marriage is considered an asset.

By contrast, the portion accumulated before the marriage is non-marital, meaning you will keep that portion before any equitable distribution.

But how do you value the portion of the 401k or IRA from before the marriage?

The incorrect common-sense approach would suggest that the husband had $50,000 in non-marital 401k, and approximately $180,000 in 401k increase during the marriage. This leaves a distribution of $90,000 to both spouses from the husband's 401k.

Example 3: Alimony is nontaxable to the spouse


Interestingly, when people hear the word "alimony", they think of additional funds that are coming out of their net pay, rather than pre-tax income.

However, the tax effect on alimony can completely change the bottom line for both the recipient and payor spouse.

The husband knows he has an alimony case, meaning he made substantially more money than his wife during his long-term marriage and he will need to provide additional support after the divorce is finalized. With the help of his lawyer, he decides he can provide around $1500 a month.

In mediation, the parties settle into that range, but the wife requests that the money to be taxable to the husband and not to her. The Husband consents and the term of support is set for ten years. 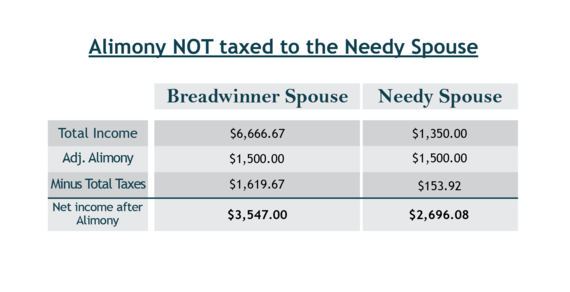 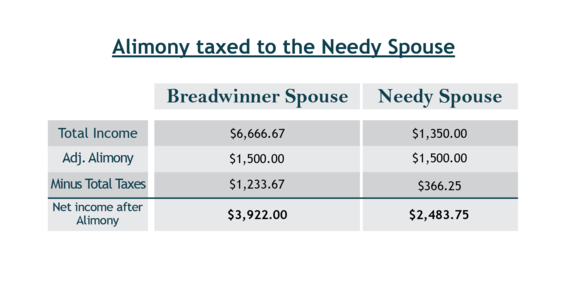 When consulting with a divorce attorney, it is crucial to select a lawyer who can thoroughly talk through all of the seemingly small details, to ensure that you don't leave hundreds of thousands of dollars on the table during your divorce settlement.

All graphics were provided by the Denmon & Denmon Law Firm.

Content concerning legal matters is for informational purposes only, and should not be relied upon in making legal decisions or assessing your legal risks. Always consult a licensed attorney in the appropriate jurisdiction before taking any course of action that may affect your legal rights.

More:
personal financestaxdivorceeconomicsTaxes
Newsletter Sign Up
A weekly guide to improving all of the relationships in your life
Subscribe to HuffPost’s relationships email
Successfully Subscribed!
Realness delivered to your inbox

A civil trial lawyer. I get to fight bullies every day.