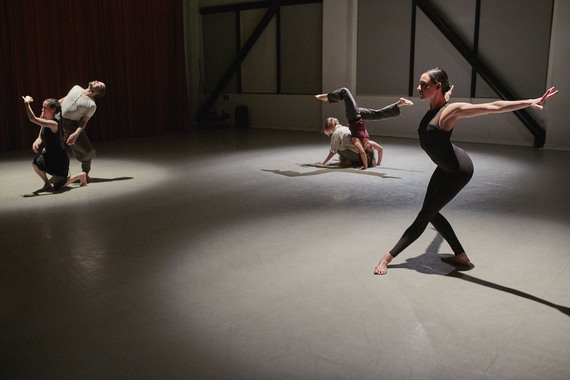 Just in from the ODC Dance Commons in San Francisco where our peripatetic correspondent has been embedded at the front lines of dance:

Rumors of a détente between contact improv, ballet, and Japanese-inspired dance theatre have been vastly exaggerated. A summit held by dance-makers Scott Wells, Amy Seiwert and Shinichi Iova-Koga yielded some entertaining and provocative insights, and left observers hopeful that the next round of diplomacy would result in a full-blown piece of theatre.

A series of joint war games was meant to bring the three camps together. These included the translation into dance of what random observers had for lunch that day. The memory of yesterday's hummus and yesterday's avocado drove the gangly (and very funny) Miriam Wolodarski into a fit of melancholy, while mention of a tossed salad and chicken-fried steak sent Scott Marlowe into alarming convulsions.

The wide-eyed, adorable Virginia Broyles was ordered to "enter like a ninja," upon which she bounced out from behind a curtain, doing her darnedest to look intimidating. The fiery, curly-maned Shira Yaziv, when instructed to "go wild," exploded impressively into the air and went splat on the studio floor.

Funnily enough, the dancers appeared most stumped by an instruction to move in a "pedestrian" manner. Extreme athletes -- which all of these dancers are -- are simply not used to moving like ordinary citizenry.

Early on, Seiwert mimed and narrated a version of Swan Lake (the version which ends in tragedy not because the prince is a self-absorbed idiot, but because he's colorblind -- hah!) The performers appropriated bits of mime and ran with them, and it looked like the evening was about to take some narrative or thematic shape. But the dancers went rogue, and had to be corralled by Iova-Koga into rituals suggested by various Japanese theatrical traditions and movement philosophies, including Butoh and Noguchi Taiso. Observers were lulled into a meditative state by the complexity of the negotiations between the dancers' feet and the floor, but were soon jolted to attention by Wells' vigorous introduction to contact improv. It starts with touch, he advised us, as the dancers wandered along random paths, deliberately colliding with each other. All of a sudden, the floor seemed a dangerous place for civilians.

Wells reminded the observers of their role in this theatre: "seeing us is touching us," he maintained, and "the world is your brain turned inside out." (Which probably would have made a better title for the evening than "Take this dance and shove it!") 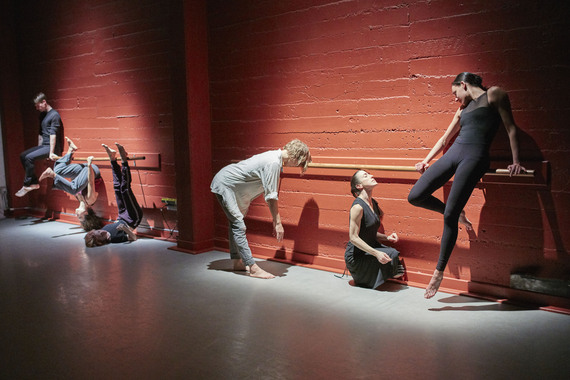 Some of the vignettes were less compelling, particularly the one in which the dancers exchanged places with the choreographers and started ordering them around. Other scenes overpromised but underdelivered, notably a longish segment set to John Williams' Imperial March (Darth Vader's theme) -- at least that's what Ballet to the People, being one of four people left on the planet who has never seen a Star Wars movie, was advised. The dancers set out on a painstaking, slow-motion hike and, one by one, were stricken as if by a deadly virus. The slight, sinewy Dana Iova-Koga stood out in this scene, her slow-mo collapse and subsequent recovery a tour de force. Throughout the evening, her mercurial presence, both solo and in complicated grapplings with her husband, was spellbinding.

More successful was a segment in which Scott Marlowe decided to have another crack at the Swan Lake mime and balletic sequence, but Broyles kept wanting to have contact improv with him and wouldn't take No for an answer. She repeatedly tackled him, and in his efforts to brush her off, he lost the thread of the mime. Marlowe finally shook her off, and embarked on an impassioned solo, which hinted at the coalescing of disparate dance techniques.

Equally striking was a sequence in which Wolodarski nattered on in highly animated fashion in Swedish, which evidently none of the other performers understand. She raced around the studio, gesticulating wildly, then executed a very slow and impressive pistol squat -- yakking away the entire time. The rest of the ensemble, clearly nonplussed but sticking to the rules of the game, attempted to recreate her spiel and antics; hilarity ensued.

Toward the end of the evening, the three choreographers sat back-to-back atop a wooden crate and, gazing off into the distance, conversed desultorily about what they had and hadn't accomplished together. Meanwhile, in the opposite corner of the studio, Marlowe and statuesque ballerina Sarah Griffin executed a tender pas de deux. One of the many wondrous moments that emerged when contact improv, ballet, and Japanese theatre collided and made sparks that evening.