Life is a billiard table. We're the balls being whacked by sticks -- political sticks, cultural sticks, psychological sticks, and the biggest of all, biological sticks. Some of these sticks we can handle, at least sometimes; others we never control, they control us. Freedom is when we're not being slammed around the table of life.

At the recent Big Sky Documentary Film Festival -- a real gem of a festival in Missoula, Montana -- I watched three excellent films that dealt with one potent stick. It may be a cultural whacker, although it's probably innate. I can't imagine this force arising from anywhere except one's DNA. It's the power that propels parents to sacrifice so their children can have better lives than they have. Sure this is love, but love in action for a specific goal. It's our nature.

Although this biological stick is universal -- only the sickest, most demented parents don't obsess over their children's future -- the parents' behavior run the gamut from completely sensible to nearly insane, and everything between. 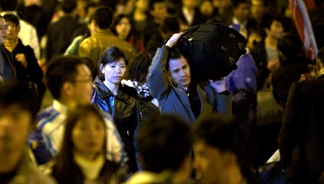 The first film I saw was Last Train Home, directed by Lixin Fan. It's a gripping tale of a husband and wife working grueling hours in a dreary Guangzhou textile plant to earn the kind of money they could never make back in the countryside. Since their two children live with a grandmother in their home village, each Chinese New Year the parents (joining some 130 million other Chinese migrant workers) make the difficult, exhausting annual pilgrimage back to their rural roots and their children.

In their village home, the 17 year old daughter -- struggling with growing pains and feeling abandoned by her parents -- has a nasty verbal and physical fight with her parents, screaming that they love money more than they love her. It's a strong scene. The daughter soon leaves the village for a city where most likely she will end up working in the sex trade.

For the Chinese parents, all the sacrifices and the pain of separation to earn money so their children can have a better life ends in heart-wrenching failure. Clearly they wanted a better life for their daughter, but they overemphasized the monetary -- not unusual for parents from backgrounds of poverty. Last Train Home concludes on this depressing note. 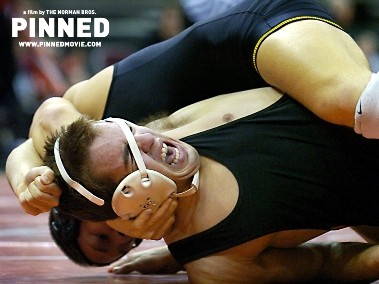 The second film, Pinned, is about high school wrestling in suburban Cleveland -- a real grabber, right? Actually, this unique film by brothers Pat and Mike Norman is about much more. It's about lifestyle and sacrifice, the social context of an intense sport, and one hard-charging father and his relationship with his two wrestling sons.

During these troubled times, Americans are increasingly insecure and unsure, and increasing extreme in thought and behavior. This is not surprising. Anxiety feeds uncertainty and that encourages extremism. So we have an explosion of fanatical religions, polarizing politics, computer addiction, obesity, and most recently, armed militant groups. When Americans are pushed, they turn weird. And extreme.

Probably no American sport is as all-consuming as wrestling. An isolated sport under the heavy shadow of the big three -- football, basketball, baseball -- with severe training schedules, lots of pain, rigorous weight control, wrestling demands passion and commitment -- if not fanaticism.

Whereas Last Train Home took us into an unfamiliar world on the other side of the planet, Pinned takes us into a unfamiliar world right here in the United States. In Cleveland, a father is riveted on his sons excelling in wrestling. He seems to have no other life. In economic-thriving China, the parents are obsessed with work to give their children a better life; in Rust Belt America, sports can be looked upon as the means to that better life.

Much is not explicit in this subtle film about the unsubtle subject of wrestling, yet one sees the stick pushing the father, and he pushing his boys to do better than he has done. There are hints that a cost -- the boys' future estrangement from their father -- will come in due time. But Pinned does not explore the future. This exhaustive, unique survey of a passion-driven American subculture leaves us to decide what the future might bring. 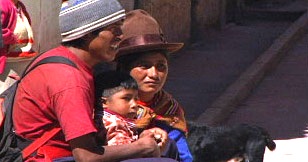 Mi Chacra (My Land) is set in a traditional agriculture community in the isolated Andes Mountains of South America. It is about as far as one can get from the manufacturing bustle of urban China and the sports-passion of suburban America. Whereas the struggle in Last Train Home is explicit, the difficulty of maintaining the family when parents are off working in the city, and the danger in Pinned is implicit, a father's fixation that will possibly push his sons away, in Mi Chacra the threat comes from a question not yet answered.

The husband and wife, simple farmers in rural Peru -- he also works as a porter on the Inca Trail -- are considering a move to the city so their son can acquire an education. If they don't move, they feel their three-year-old is destined to live the life of poverty and illiteracy that they are living. Yet, in this isolated Peruvian community of a few hundred indigenous people, the community remains tight and strong. Still, life is hard and limited. What to do? Stay or leave?

Director Jason Burlage delivers stunning expansive mountainous scenery with an intimate human focus, which sucks us into this isolated corner of the world and a couple's difficult decision. While their traditional lifestyle has disappeared in much of the world -- completely in America, quickly disappearing in China -- this Peruvian couple ponder whether they should leave this world.

Three excellent films with parents -- Chinese with a young boy and teenage girl, American with two high school boys, Peruvian with three-year-old child -- three sets of parents taking three different approaches in response to the universal drive -- a biological stick -- to give their children a better life. The money-centric approach in China is an outright failure. Sports obsession in America is uncertain and problematic. Indecision in Peru is, of course, indecisive. Three smart films delve into three distinct communities to reveal the problems and the hopes in each for a better life.

This is independent film making at its best; taking us far away, even when as close as Cleveland, uncovering the diversity in the world that reveals what we all have in common. Last Train Home, Pinned, and Mi Chacra will unsettle you, make you question your own life and probe your dreams. They deliver a good whacking from one heavy stick.