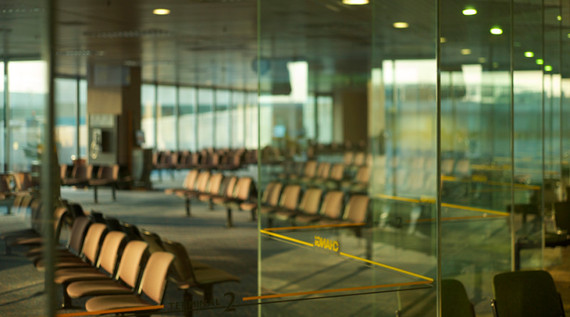 Contrary to popular belief, it is not like being transported into another world. In fact, it's a lot like watching Scream Queens: somewhat interesting but ultimately disappointing.

Most domestic lounges are so terrible that it's hard for me to feign any enthusiasm for them these days. Even the freebies, from the Milanos to the lamps, aren't worth it in my opinion. And who the hell needs a lamp for their flight?

This is on par for domestic lounges. In fact, they're so bad that once my upgrades started clearing on a regular basis (and the novelty wore off), I stopped going to the lounge entirely before my flight. It was a better use of my time to get extra shut-eye, pick up food at the grocery store for the flight or do ANYTHING except spend more time at the airport.

Most of the time, while snacks and basic drinks are free in a lounge, most travelers will be hard-pressed to even find some Milanos lying around these days. (Expect to pay up for alcoholic drinks at least half of the time; finger food often comes in the form of carrots, celery and ranch dip.)

There are definitely decent domestic lounges like Virgin Atlantic Clubhouse at JFK and LAX's Star Alliance Lounge in Terminal 7 but they are few and far between. No one is kidding anyone here.

The really exceptional ones, the ones that make you think you've been whisked off to Disneyland, are often located internationally and require more than a credit card to get past the pearly white gates. Those, you'll have to work for.

Let's consider it for a second. Take the Virgin America Loft at LAX: in order to use its facilities, it costs $30 for a day pass. But that doesn't mean it's a free-for-all once you get inside.

Once inside, a decent cocktail will run $10-$12, while light bites and plates still cost $2-$12 AFTER you've paid for the pass. (Wine is available for free but don't expect the good stuff.) Considering the free Wi-Fi is also most likely available for free out in the terminal, where all the commonfolk sit outside, it's a break-even on that.

Quite comparatively, I can find still find decent airport food--follow the pilots on this one--and find a nice spot to grab a drink before the flight for $30, except I've got more variety and options on the outside.

Besides, not to be elitist, but the best lounges will rarely allow outsiders to enter on a day pass. In fact, those often require people to have a business- or first- class ticket like Singapore Airline's SilverKris Business Class Lounge at Changi Airport.

Even elite alliance status may not cut it: Star Alliance Gold members are known to famously get herded off to the less prestigious Krisflyer Gold Lounges.

#3: You'll miss out on any vouchers being offered.

I'm a bit of a cheap whore when it comes to vouchers: mainly, I fly so much on my own dime that I'm almost willing to do anything to offset the cost.

But more importantly, vouchers are only offered at the gate by the gate agent. Do you know where vouchers are NOT offered? The lounge! There is a reason why lounge agents often tell passengers flying on a different airline that "we do not monitor flights from that airline, so please be cognizant of your boarding time." Perhaps it is unseemly for a lounge to make boarding calls inside the lounge.

There are always a select few people who are willing to vouch their time in exchange for some flight cash money. And it pays to be one of the first few people to volunteer... see you in line.